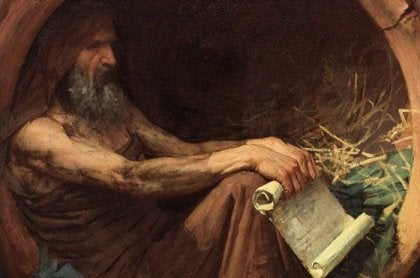 These Diogenes the Cynic quotes tell us about one of the most truthful philosophers of all time. That is, someone with a strong will to understand the world, and to get to the truth just because they love the truth.

Many of the Diogenes the Cynic quotes weren’t conserved, for he never wrote them down. However, the ones that have survived until now come from his followers, especially his namesake, Diogenes Laertius, who was given the task of collecting several of his sayings.

“Wisdom serves as a brake on the youth, as comfort to the old, as wealth to the poor, and an adornment to the rich.”

This philosopher was born in Sinope and became famous in Athens. What distinguished him was his great detachment from worldly life. He loved freedom above all and wasn’t afraid to tell the truth to powerful people. It was said he lived in a cask and many thought he was a beggar. These are some of his best-known quotes:

Diogenes himself was known for using very hard speech to convey the truth. However, his claims pertained to double standards and lack of ethics. He didn’t seek to attack the person, only question his morals.

One of his followers, Hecaton, wrote down one of the quotes he said the most: “It is better to fall in with crows than with flatterers; for in the one case you are devoured when dead, in the other case while alive.”

This philosopher detested flatterers. He became famous because Alexander the Great searched for him, attracted by his fame. He introduced himself to Diogenes and asked him if he needed anything. Although it’s hard to believe, Diogenes asked him to leave because he was blocking the sunlight.

It’s said that once, Diogenes stopped to observe a child who was collecting and drinking water with his hands. The philosopher had very few belongings, but he did have a cup. When he saw the child, he said: “A child has surpassed me in simplicity” and threw the cup away.

On another occasion, he observed that a child was eating his food on a leaf. They were lentils, but he used bread as a spoon. Imitating him, Diogenes threw his bowl away and started eating like that from that moment on.

4. Quotes on keeping quiet and talking

If the quote isn’t Diogenes’, it’s still consistent with his thinking. It means that communication is a complex process in which listening is important. First, you must learn how to speak, and knowing how to speak implies understanding while being silent.

5. Quotes on charity and its interests

History tells us that an Athenian, impressed by the degree of poverty in which Diogenes lived, approached him and asked: “Why do people give to beggars and not philosophers?”

Diogenes thought for a moment and replied: “Because they think they may one day be lame or blind, but never expect that they will turn to philosophy.” This is an ingenious way of saying that charity is inspired by some kind of selfishness, which, most of all, feeds the help inspired by such selfishness. There’s only a lack of virtues. Not compassion, only fear.

In Diogenes’ time, philosophers were very much appreciated. He could have lived as a protegé of the nobles, enjoying luxuries and privileges. However, he chose to achieve the highest degree of genuineness. This is the reason why people still remember him today.

7 Ingredients of Happiness
There's no special, secret recipe with the ingredients of happiness. It's not exactly joy, it's more like internal balance and peace, and you create it for yourself. Read more »
Link copied!
Interesting Articles
Sayings
9 Extraordinary Phrases from Jacques Lacan