The 3 Most Common Mistakes People Make When They Argue 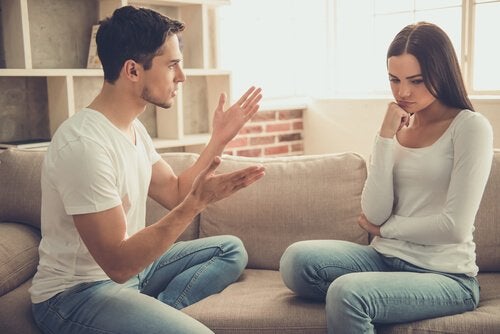 We live surrounded by different kinds of people. Because of this, we have to coexist with people we don’t understand and people who drive us crazy. In these situations, we’re more prone to arguing. Yes, it’s obviously better not to argue with others. However, if we can’t avoid arguing, learning how to avoid the most common mistakes people make when they argue may be very useful.

When we get into a verbal fight, we usually tend to make mistakes over and over again. These mistakes make discussions unpleasant and make it difficult to reach an agreement. In today’s article, we discuss some of the most common mistakes people make when they argue, as well as some of the ways to avoid them.

What are the most common mistakes people make when they argue?

Every argument is different. However, we tend to repeat the same mistakes over and over again. Some of the most common mistakes we make when we argue are:

Let’s discuss them one by one.

1. Identification with our ideas

On my occasions, arguments have nothing to do with situations, circumstances, or events that directly involve us. We also tend to get angry over controversial issues when we could exchange points of view calmly. Some of the most common issues people argue about are religion, politics, or social issues such as feminism or homosexuality.

It doesn’t make any sense to get angry just because different opinions exist. However, this is what ends up happening in most fights. The temptation to convince the other that they’re in the wrong is huge. The problem arises when we give in to this temptation. And, instead of achieving our goal, we end up getting angry.

Why does this happen? According to some schools of thought, we identify ourselves with our beliefs. This means that if someone messes around with an important idea for us, we feel as if they attacked us personally. This causes unnecessary tensions.

To avoid this, the best thing to remember is that, while disagreement is respectable, disrespect is not. In this sense, we may use assertiveness to show the other person that having different opinions isn’t a bad thing.

“I disapprove of what you say, but I will defend to the death your right to say it.”

2. We get ready to fight

Another most common mistake people make when they argue is taking verbal disagreements like a battleground. When we get ready for a fight, we see these situations as if we had to emerge victorious from them. It’s as if our ideas have to be “stronger” than those of our rival. In this way, we want to make them give in to our superiority.

It’s easy to see how this may bring us problems. On one hand, our relationship with the other person will deteriorate. On the other hand, in most cases, our opinions are just that: opinions. Even in cases where we’re really right, it’ll be very difficult to convince the other person. At the end of the day, if a person thinks in a certain way, it’s because they have good reasons for it.

Therefore, it’s usually much more productive to understand where the opinion of the other person comes from. Even in situations where their ideas seem offensive, we can learn a lot if we just listen to what they have to say. This doesn’t mean that we shouldn’t defend our own ideas. It means that it doesn’t make sense to try to convince others at the expense of our well-being and peace of mind.

3. Oversimplification of the problem

The last mistake people make when they argue is seeing the world divided in black and white. For us, the issue we’re fighting for is clear. There’s only one truth and the rest of the opinions are totally wrong.

However, the other person also believes that their ideas are correct. How can this be? Are they totally unable to see reality or is there something else? Often, what happens is that the issues we’re discussing are quite complex. Therefore, almost all opinions are partly-true.

We have to remember that we don’t possess absolute truth. If we do that, the discussion’s intensity will decrease in most cases. It’s good to trust our own opinions, but it’s important to do it with humility. Remember that we’re fallible and can make mistakes.

As you can see, these three mistakes come from the need to be superior. There are many other ways to transform an exchange of opinions into a battle. However, the majority of them can be solved if we respect each other. If arguing in a healthier way is something important for you, the best way to achieve this is by remembering that the other person isn’t your enemy.

What Is Respect?
Respect is an attitude that develops through mature and mutually enriching interpersonal relationships. Read more »
Link copied!
Interesting Articles
Wellness
Sometimes It's Patience, Not Love, that Runs Out

Sometimes it is patience, not love, that runs out. Patience, that sacred virtue that resists winds and tides and always ends…

Wellness
How Do Lies Affect Us?

We live in a society where double meanings are latent in every circumstance. What we don't know is the power that lies have over our bodies. The load they put on our…

Wellness
The Illusion of Transparency: I'm Actually Not Okay

So many people suffer from the illusion of transparency. They think that all their sadness, emotion, and desperation is clearly visible…

Wellness
How to Turn Fears into Workable Challenges

Fear is a fundamental emotion to which all our other emotions are related. It generates both internal and external discomfort and…