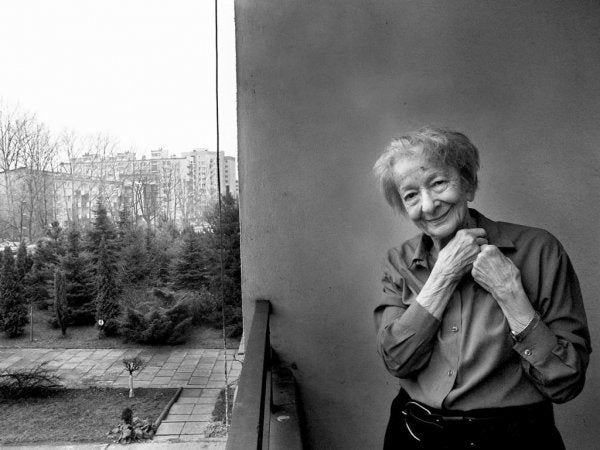 Wisława Szymborska was a Polish poet, essayist, and translator. She authored over 15 poetry books, but was also an editor and illustrator. In her work, you can appreciate the amazing personal and intellectual evolution she went through. She was a woman who was marked by the German occupation of Poland during World War II.

In her younger years, Wislawa had to study secretly in German-occupied Poland. After the war, the poet became a communist. However, throughout her life, she became disillusioned with Communism and no longer approved it. After her first two books, Wisława no longer supported Stalin.

She won the Nobel Prize in Literature, but her life didn’t just revolve around literary production. Wisława Szymborska was also famous due to her Polish translations of universal masterpieces.

Actually, Wisława was her middle name. Her full name was María Wisława Anna Szymborska, born on July 2, 1923, in Prowent, now part of Kórnik, west of Poland.

At the time she was born, her father was a butler for count Wladyslaw Zamoyski, a tycoon and landowner. The count owned Prowent.

Her family was very intellectual. Everybody read a lot and discussed books. Wisława always showed her poems to her dad and, if he liked them, he’d give her a coin as a reward.

After a second move in 1931, Wisława enrolled in a school convent in Krakow, but she couldn’t finish her studies there. The poet suffered in her youth due to her father’s early demise and the German occupation of Poland.

During the 20th century, Wawel Castle was the official presidential residence after the nation was occupied. Krakow became the German Cabinet’s home office, and Wawel later became the residence of Nazi Germany’s chief jurist, Hans Frank.

After years of studying underground, Wisława Szymborska finished her exams in high school in 1941.

In 1943, she started working in the railroad industry, thus avoiding deportation to Germany for forced labor. During this time, she managed to work illustrating English textbooks and started writing stories and poems.

When the war ended in 1945, Wisława enrolled in the Jagiellonian University to study Polish literature. Later on, she switched careers and studied sociology. However, she had to quit her studies in 1948 due to financial difficulties.

The Literary Beginnings of Wisława Szymborska

In March 1945, Wisława Szymborska made her debut on a newspaper called Dziennik Polski, publishing her poem Szukam słowa (Searching for the Word). Soon, many of her poems were published in different newspapers and local media.

After quitting school in 1948, she took a job as a secretary in a biweekly educational magazine. Around the same time, she also worked as an illustrator for this magazine and continued writing poems. In 1949, she finished her first collection of poems.

As most intellectuals of the time, Szymborska’s early works reflected the Socialist philosophy that marked Poland at the time. Her first collection, Dlatego żyjemy (That’s Why We Are All Alive, 1952), which has many of the poems that reflected her political views.

During the 50s, Szymborska became a member of the Polish United Workers’ Party. Her next collection, Pytania zadawane sobie (Questioning Yourself), published in 1954, really embraced her Socialist ideals.

However, Szymborska became disillusioned with the communist ideology, and in her third collection of poems, Wołanie do Yet (Calling Out to Yeti), published in 1957, she declares her disenchantment and how her thoughts had changed. The poems in this collection express her dissatisfaction with Communism, in particular with Stalinism.

In these poems, she worries about humanity and even compared Stalin with the Yeti. With these actions, she separated herself from the Polish United Workers’ Party.

“At the very beginning of my creative life, I loved humanity. I wanted to do something good for mankind.”

The poet ended up rejecting her first two collections. She thought they were part of that socialist realism she’d be very critical of for the rest of her life.

Throughout her life, Wisława Szymborska wrote over 15 poetry books. However, she wasn’t just a famous poet, she was also considered a critic and translator thanks to her reviews on books and her translations of French poetry.

Starting in 1968, she began her own column when she’d review books, called Lektury Nadobowiązkowe (Non-required Reading). Most of those essays were compiled and published later on as a book.

Besides her Nobel Prize in Literature in 1996, Szymborska received many accolades. Among them: the Polish Ministry of Culture Prize (1963), Goethe Prize (1991), Herder Prize (1995), and the Polish PEN Translation Prize (1996). In 1995, she was given the title Honorary Doctor in Arts by the Adam Mickiewicz University in Poznań. In 2011, Wisława Szymborska was awarded the Order of the White Eagle. This is the highest honor that can be given to any individual by the Polish government.

Her Personal Life and Legacy

Wisława Szymborska married poet Adam Włodek in 1948. Their house in Krupnicza Street 22, in Krakow, became the meeting place for many writers of the time. Among those that visited, writer Czeslaw Milosz stands out. The couple divorced in 1954 but remained close friends. They didn’t have any children.

“Let the people who never find true love keep saying that there’s no such thing. Their faith will make it easier for them to live and die.”

Wisława Szymborska died peacefully in her sleep on February 1st, 2012, in her home in Krakow. She was 88 years old and was working on a new poem.

Nowadays, Szymborska’s poems are included in some school programs. She’s become an internationally known poet and her work has been translated to languages such as English, French, German, Arabic, Hebrew, Japanese, and even Chinese.

Her poems are noteworthy due to how precise and beautifully worded they are. At the same time, her poetic work gives this feeling of ironic detachment.

“Every beginning is only a sequel, after all, and the book of events is always open halfway through.”

While Polish history at the start of World War II and Stalinism clearly influenced her poetry, Wisława Szymborska was a profoundly deep poet. She explored many great truths in common and mundane things. Her poetry is a reflection of the many things that marked her life and how this, just as her poems, evolved and took many roads with each passing day.

Giuseppe Verdi: The Patriotic Composer
Giuseppe Verdi is one of the most important figures in the world of Opera. A musician for the masses and a patriotic man. Read all about him here! Read more »
Link copied!
Interesting Articles
Curiosities
Blue Monday: The Saddest Day of the Year?

Culture
The Planning Fallacy: A Frequent Cause of Unproductivity

The planning fallacy is a concept that we all know about. It's when plans don't coincide with facts. It can happen in any…