Why Don't I Get Angry?

Do you ever feel like you're incapable of expressing your anger? When someone hurts you, do you respond with thoughts and behaviors that worsen the situation? If your answer is "yes", this is the article for you. 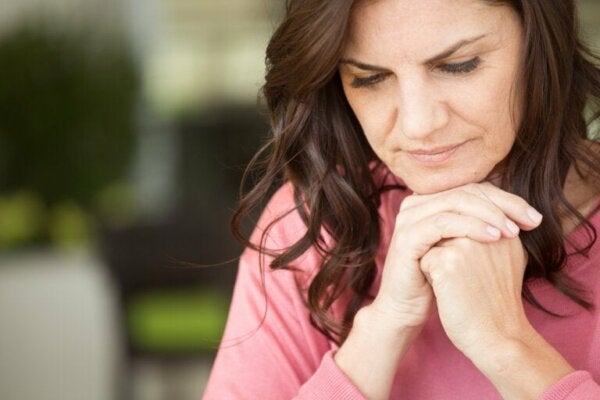 If you know how to manage anger, it can be really helpful. In fact, some people feel like they can’t get angry, even if someone else hurt them or treated them unfairly. If you identify with this, you know that not being able to get angry makes you feel bad.

It isn’t exactly accurate to say that these people don’t get angry, as they’re able to tell when other people have violated their rights in some way. However, their coping strategy is to keep everything inside. This is often due to insecurity or poor social skills. The result of not letting these feelings out is that the emotional energy turns inward and negatively affects their well-being.

Why is anger important sometimes?

Anger, like the other basic emotions, has several essential functions. Most of us consider it a fundamentally negative emotion, but it’s actually necessary when situations that could threaten your integrity come up. In other words, anger has an essential role to play in your survival. Consequently, it’s an important part of how the human species evolves.

Physiologically, anger is easy to identify. It triggers adrenaline and noradrenaline, hormones that play a role in emotions such as fear and aggressiveness. Also, it raises your blood pressure and makes you breathe faster. Your body prepares itself for a confrontation.

In addition to being part of your survival instinct, anger is a catalyst for change. Staying angry is unpleasant. Thus, it forces you to expend a significant amount of energy to change whatever’s bothering you. It can also push you to defend your personal boundaries when they’re in danger of being violated.

Why is it so hard to express anger?

If you can’t get angry, you might find yourself in harmful situations again and again because you didn’t react to similar events in the past. Next, we’ll describe some of the factors that explain this phenomenon:

Is being unable to get angry really a problem?

Anger is a basic emotion that has different psychological and physiological functions. So what happens if you tend to repress your anger?

To answer this question, it’s useful to think about the following questions in the context of concrete situations. “When have you felt like you should get mad but can’t?” and “What are the consequences of repressing your anger?” After this reflection, you might identify with one of these situations:

Anger is a release and it helps you breathe easier

Although most people consider anger negative, it serves a regulatory function. In fact, as we mentioned above, it’s a great catalyst for change on a personal and social level. It’s also a defense mechanism against outside forces that threatened your personal integrity. In addition, it can be a way to cushion anxiety if you know how to manage it.

Unfortunately, some people feel incapable of expressing anger and rage. Our culture tells us that being happy all the time is important, which hinders appropriate emotional expression. The way you see your family and friends deal with anger also conditions your response. Repression of anger can also be related to shyness or fear of what people will think of you.

If you have trouble expressing your anger, working on it is important for your health and well-being. If you don’t address the problem, you’re unlikely to respond assertively when the situation calls for it. You might also miss the signs your body and mind are sending you to make a change in your life. Lastly, your anger could build and build until it becomes completely overwhelming.

In your life, you’ll deal with situations that require calm and clearheadedness. Others that’ll end in tears and sadness, and others that’ll leave you feeling hurt or stuck. In those situations, it’s completely appropriate to express anger. If you do it in an intelligent way, it has the power to liberate you. Knowing how to properly manage your emotions can be the key to happiness and well-being.

The Anger Stage of Grief: What’s It Like?
In this article, we're going to focus on a specific, often problematic stage of grief: anger. Read on to learn more about what makes it so difficult. Read more »
Link copied!
Interesting Articles
Art and Psychology
Wu Wei: The Art of Non-Action

What rules regulate behavior? Many theorists have spoken about human motivations regarding social needs. Scholars have also tried to determine…

Culture
The Silent Mind: The Secret To Relaxation

The silent mind is weightless, transparent, free and as shiny as the surface of the sea. Selfishness disappears, external pressures…