Why did Nietzsche embrace a horse and cry? 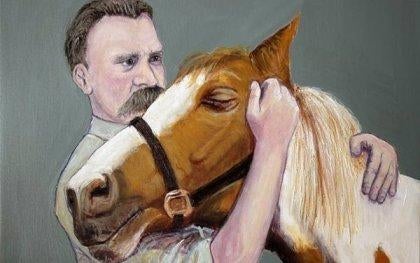 Federico Nietzsche was a German philosopher who created some of the most touching works of the western thinkers. During the year 1889 the philosopher lived in a house on Carlo Alberto street in Turin, Italy. It was morning, and Nietzsche was heading towards the center of the city, when suddenly, something happened that would change his life forever.

He saw a coachman beating his horse because it wouldn’t move forward. The poor  animal was completely exhausted. It has no strength left. Yet the horse’s owner whipped it again and  again, trying to make it walk despite its complete exhaustion.

“Those who fight monsters must take care to not become monsters themselves. When you spend a long time looking into an abyss, the abyss also looks into you”  -Federico Nietzsche-

Nietzsche was horrified by what he saw, and quickly approached the scene. After denouncing the coachman’s behavior, Nietzsche approached the collapsed horse, embraced it, and began to cry. Witnesses say he murmured a few words to the horse, that no was was able to hear. Legend has it that the philosopher’s last words were “mother, I’m a fool”. He then lost consciousness, his mind changed forever.

One morning that changed everything

Since that day, Nietzsche’s dementia has intrigued doctors and intellectuals around the world.  All kinds of speculation had been made on the subject. There are at least three versions of what happened that morning in Turin. The only clear thing is that the philosopher was never the same again.

From that day to his death ten years later, Nietzsche never spoke again. He would never again to return to his former self after the horse incident. The police were alerted, and the philosopher was arrested for disturbing public order. Shortly after, he was taken to a mental sanatorium. From there he wrote a few incomprehensible letters to two of his friends.

An old acquaintances later brought him to a sanatorium in Basil, Switzerland, where he stayed in several years. One of the the 19th century’s greatest thinkers was left dependent on his mother and sister for nearly everything. As far as is known, he never returned to reality.

It’s since been determined Nietzsche’s actions that day -hugging the and crying with the beaten horse- was a manifestation of his mental illness. Nevertheless, those around him had noticed odd behavior for years. The manager of his the house where he lived, for example, had heard his talk to himself. He was also known to sometimes sing and dance naked in his room.

He had long neglected his appearance and personal hygiene. Those who knew him noticed his proud walk change to a sloppy struggle. He wasn’t the astute thinker he used to be either. He begun to speak in a jerky way, jumping from one topic to another.

Nietzsche progressively lost his cognitive abilities in the mental sanatorium, including language. Sometimes he was aggressive, even hitting those around him. And yet, just a few years earlier he had written several of the works that would make him known as one of the greatest philosophers in history.

Most people saw the horse incident as nothing more than irrational actions caused by mental illness.  Some, however, see a deeper, more profound meaning. Milan Kundera, in the “The Unbearable Lightness of Being” returns to the scene of Nietzsche of embracing and crying beside the beaten horse.

For Kundera, the words Nietzsche murmured into the horse’s ear was him asking for forgiveness. From Kundera’s perspective, he did so on behalf of all mankind for the savagery with which humans treat other living being, treating them enemies or servants.

Nietzsche wasn’t known as an animal rights advocate or for having a special connection with nature. But that incident of animal abuse clearly had a strong impact on him. That horse was the last living being he had a real connection with. More than the animal itself, Nietzsche could deeply identify with its suffering.

Nietzsche was not well known to the public at the time, even though he previously had an excellent reputation as a professor. Unfortunately,  his last years were basically miserable. His sister misconstrued several of his writings to make them agree with German Nazism. Nietzsche couldn’t do anything about this. He was immersed in a deep dream until his death in 1900.

Psychology of Forgiveness: How Letting Go of Spite Allows Us to Move Forward

Masked control mechanisms are strategies that some people use to manipulate the behavior of those around them. These people use them because…

The most common symptoms of bipolar disorder are sustained, quick, and drastic changes in someone's mood. These fluctuations considerably affect…

There are parents who, despite being present, are emotionally unavailable. Sheathed in their daily concerns and particular worlds, they do…