Why Are Children Fascinated by Dinosaurs?

Many children seem to have a real passion for dinosaurs. They know all about the unique characteristics of each species, what they ate, and can even distinguish between the different geological eras. But where does this fascination come from? 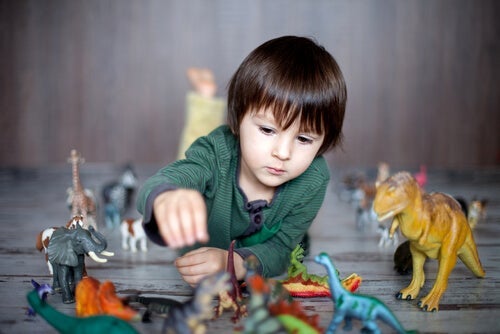 From diplodocus and triceratops to tyrannosaurus rex and velociraptors. Whatever the species, dinosaurs capture the imagination of children around the world (as well as many adults). In fact, you probably even liked them yourself when you were young. Or maybe you had a close friend who was a budding dinosaur expert. But why are so many children fascinated by dinosaurs?

Children’s fascination with dinosaurs is often far more than just a hobby. In many cases, they know the scientific names of different species, as well as what they ate, where they lived, and their unique physical traits. Some children even know about the different geological eras and the dinosaurs that lived during each one. Amazing, right? But where does this fascination come from?

“One of the huge mistakes people make is that they try to force an interest on themselves. You don’t choose your passions; your passions choose you.”

The importance of intense interests

In the world of psychology, there’s a concept known as “intense interests”. This term refers to a childhood preference, motivation, or passion for a specific object, activity, or topic. This phenomenon usually appears at a very young age and is more common in boys than in girls.

A passing preference for a particular item or subject, such as a costume, toy airplane, or, in this case, dinosaurs, doesn’t constitute an “intense interest”. Instead, this term refers to the development of a certain attraction and an immense passion for a specific object.

Some children seem to feel an immense desire to find out everything they possibly can about a very specific topic. In some cases, this attraction can even manifest in the form of certain obsessive traits.

These types of interests usually share a series of common characteristics:

Parents are often quick to identify this type of behavior in their children. As soon as they see something related to their topic of interest, children will immediately want to investigate and find out more. For example, they may ask lots of questions, looking for information to satisfy their intellectual curiosity. Once they’ve gathered enough information, or learn something new, they may then feel the urge to share that information with those around them.

Many children are fascinated by dinosaurs because they experience a great surge of passion and curiosity, known as an “intense interest”.

Children with these kinds of intense interests are like researchers, constantly seeking out new information that will allow them to learn more about their specific topic of interest. They’re usually looking for new ways to learn more and enjoy staying up-to-date with new developments. They also want others to know about their “new discoveries”.

According to some studies, almost a third of children develop these kinds of interests between the ages of two and six. However, in some cases, their obsession can last even longer. In this regard, it isn’t surprising that many children are fascinated by dinosaurs.

Why are children fascinated by dinosaurs? The cognitive benefits of this

The results of the study The development of conceptual interests in young children, conducted by Indiana University and the University of Wisconsin-Madison, revealed that intense interests that demand conceptual mastery, such as dinosaurs, are very beneficial for cognitive development in children.

This is because, in addition to enriching their vocabulary, they also increase their knowledge of a specific topic, helping them to develop complex skills, such as information processing, attention span, concentration, and perseverance.

Moreover, a child’s interest in topics such as dinosaurs can also provide information on the strategies they use when approaching both topics that interest them, and those that are yet to be discovered. This, in turn, provides clues about how they’ll cope with all the day-to-day challenges life will throw at them.

Children who show this kind of intense interest don’t tend to limit themselves to superficial knowledge. Instead, they like to take their interest a lot further and investigate the topic in depth. They also tend to be more autonomous and have an easier time developing their analytical skills.

These types of interests tend to last between six months and three years, according to research by the University of Virginia, Yale University, and the University of Queensland, Australia. In fact, only about 20% of children actively maintained their intense interests over the years.

It should also be noted that older children who maintain these intense interests over a prolonged period of time tend to have higher than average intelligence.

There are a number of reasons why these interests may fade over time. The most common reason is that they tend to have less free time for research once they start school, and find that their studies demand knowledge of a broader range of subjects, albeit in less depth.

Parents can help to maintain these passions by feeding their children’s curiosity and encouraging them to make time to explore the topics that interest them. To do this, they can:

Educational Psychology
Seven Keys to Teaching Your Children How to Share