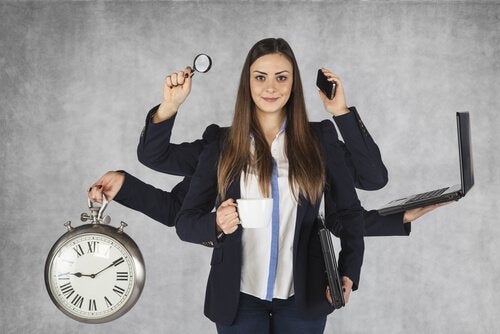 Certain working conditions can raise anxiety and stress level. What’s curious about this is that, although a workaholic also suffers from that, they feel irritated when they’re not working.

A workaholic is essentially someone who’s addicted to their work. They focus their life on their work and they don’t give much importance to other things such as family, social, or personal matters. And so, their inability to disconnect from work puts their health at risk. According to Marisa Bosqued, a clinical psychologist with a lot of experience in work-related matters, the workaholic’s situation makes them lose emotional stability gradually. They may even reach a point where they become addicted to control or power.

Are you a workaholic?

The usual symptoms of a workaholic are grouped into three categories, depending on the dimension they affect. Nonetheless, it’s important to know that there isn’t a medical condition that defines this ailment.

However, the behavioral aspects a person might manifest could vary. For example, they tend to not use their vacation days. In some extreme cases, they might actually never use those days in order to stay working. Another sign is that they’re the first to get to the office in the morning and the last ones to leave in the evening.

These people don’t enjoy their free time. They tend to spend their leisure time thinking about work or may even go to the office to work. Additionally, they tend to talk mostly about one specific topic: their work. Thus, it’s normal for these people to take their work home in order to finish more tasks.

The center of their life

For these people, their work gradually becomes the center of their lives. In fact, it spreads into their life and replaces everything else. Normally, workaholics tend to have few relationships. Thus, they turn to work more frequently to escape from their personal problems.

According to Wayne Oates, a psychologist, doctor, and educator, the relationship that a workaholic has with their job is similar to that of an alcoholic with alcohol. They feel an insatiable need to continue working. So much so that it ends up affecting their health and wellbeing and destroying most of their social relationships.

Bosqued assures that this addiction comes from an unreasonable professional ambition. Thus, they work this way because they think it’s the only way to reach their goals. In fact, they seek to stand out because they have learned that the more effort, the more power.

The positive side of a workaholic lifestyle is that it has great career consequences. They become a work standard for both their boss and coworkers. They’re often role models due to the amount of time that they dedicate to projects, how much they get involved in company matters, and their level of motivation. In the end, all those sacrifices have rewards in the form of promotions, power, and money.

However, these rewards reinforce the behavior. Thus, this makes it more difficult for the workaholic to quit their addiction. They believe that their behavior rewards them with higher doses of power and ambition.

A connotation that isn’t so negative

The difficulty to categorize this behavior as a disorder lies in the fact that overworking isn’t usually considered something negative. When someone uses drugs regularly or takes refuge in alcohol to escape from their problems, their social circle disapproves of their behavior. But this isn’t the case when the person is addicted to their work. Nobody looks down on that.

However, it’s still a disruptive behavior. It’s dysfunctional because it doesn’t consider the other basic pillars of life: family, leisure, and social relationships. This limitation or restriction of leading a “normal” life is what makes being a workaholic a problem.

Imagine that your best friend starts to dedicate their whole life to their family because one of the members is dependent on them. Little by little, they start to spend more time with their family member and start to leave their work, education, and friends behind. In the end, they’ll probably develop a caregiver’s syndrome. The workaholic’s case is a parallel one, masked by responsibility and the commitment to take their work to extreme levels.

Thus, dedicating ourselves exclusively to our work is not very convenient because it can generate severe emotional imbalances. The best thing to do is to try to find a balance so our happiness isn’t dependent on anything and it becomes a more lasting state of mind.

How to Have a Positive Attitude at Work
It's often hard to keep a positive attitude at work, but as work takes up so much of our lives, it is vital to do so. Read on and learn how to nurture a positive attitude. Read more »
Link copied!
Interesting Articles
Stories and Reflections
The Invention of Morel: a Beautiful Reflection on Immortality

Culture
Sisterhood: The Value of Women Coming Together

A sisterhood is a social, ethical, and emotional pact between women. It's based on an understanding that together we are…

Culture
Myths and Facts about Ayahuasca

When it comes to synectics, creativity, and problem-solving, the brain is like the tip of the iceberg: we can only…

Culture
What is the Synaptic Cleft?

A synapse is where two neurons connect to transmit information from one to another. These synapses are not where the nerve directly touches another nerve, though. Rather, there is a…