A psychological autopsy is a process applied as part of a judicial investigation. Its purpose is to establish the possible causes of a suicide, if it really was a suicide, and what kind of psychological patterns occurred. 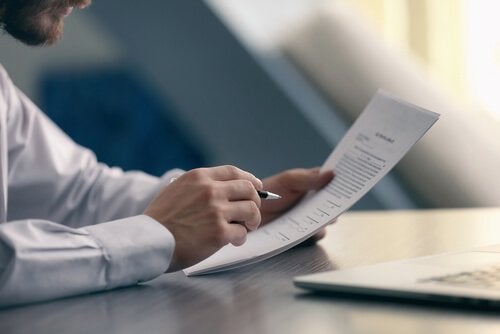 A psychological autopsy is a forensic technique aimed at establishing or specifying the causes of a suicide. In some cases, experts use it to confirm whether a person’s death was actually due to suicide. However, it’s a relatively new field that has only begun to be applied systematically in the 21st century.

The term psychological autopsy was first coined in the 1950s, in the works of Shneidman and Farberow. Edwin S. Shneidman was an American clinical psychologist who studied suicide and thanatology. Together with Norman Farberow and Robert Litman, he founded the Los Angeles Suicide Prevention Center in 1958.

However, the concept of a psychological autopsy had been hinted at in the United States around the 1920s. After the era known as the Great Depression, there was a wave of suicides in that country. This kind of epidemic attracted the attention of many scientists, and they then made attempts to find common causes. However, it was only with Shneidman and Farberow that they consolidated the concept.

What experts carry out in a psychological autopsy is an indirect and retrospective reconstruction of the life and personality of the person who died. It’s an investigative process that seeks to establish the circumstances and reasons that led a person to commit suicide.

In general terms, it has two main goals. The first is of a forensic nature; the second is of an epidemiological nature. A psychological autopsy is ordered as part of a criminal investigation and is a tool to complement the medicolegal autopsy. Experts apply it, almost always, in cases where the cause of death is doubtful.

From an epidemiological point of view, this tool aims to collect relevant information in order to establish expressions of behavior, circumstances, and motivations, etc. All this information should help to establish common risk factors, with the aim of preventing or avoiding further suicides.

Although to a lesser extent, this tool also serves other purposes, such as establishing the legal validity of actions carried out prior to death, such as the signing of documents.

Other applications are to assess whether there were errors in practice in people who were undergoing medical or psychological treatment, to structure psychological profiles, and to construct criminological categories, among others.

This type of autopsy uses three main tools: the study of the crime scene, the collection of psychological fingerprints, and interviews with people close to the victim.

There are several protocols involved in performing a psychological autopsy. However, one of the most common ones is the MAPI model, created by Dr. Teresita García Pérez. She’s a Cuban doctor, and her method has proven to be very practical and functional. The word MAPI refers to the four basic aspects that experts will look into. They’re the following:

The protocol indicates that the first thing to do is to work on the death scene. There, they can look for psychological fingerprints, signs, and indications of the circumstances surrounding the suicide.

After that, investigators conduct structured interviews with three people who were close to the victim, using 60 different aspects or factors. These interviews take place between one and six months after the death.

Finally, an interdisciplinary analysis is carried out involving the psychologist, the doctor, and at least one criminologist. An expert will then compile their report, which is of a probabilistic nature. In this report, they’ll establish the cause of death, based on the NASH code: Natural, Accidental, Suicide, or Homicide, and then record the possible causes of the death.

Suicide, An Irreparable Pain For The People Left Behind
Suicide is one of the most taboo subjects in our society, but it's very important to talk about it so we can support people who have just lost a loved one. Read more »

Link copied!
Interesting Articles
Culture
The Legend of the Toh Bird: A Lesson in Humility

Bayes' theorem is one of the pillars of probability. Its namesake comes from Thomas Bayes (1702 - 1761), who proposed the theory in the eighteenth century. But what exactly was the…

Imagine this. One day, you wake up in the morning, open the fridge, grab the cream for your coffee, and…