What Is Your Dominant Intelligence? 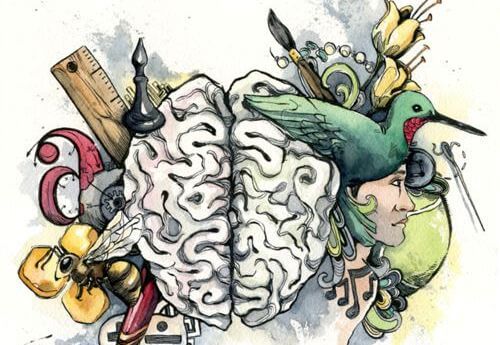 It is said that Einstein and Chaplin, two people renowned for their intelligence, happened to be at the same social gathering one time. They started to talk and Einstein told Chaplin, “What I have always admired about you is that your art is universal; everyone understands and admires it.”

Chaplin very wittily responded, “Yours is much more worthy of respect: everyone admires it and practically no one understands it.” What was going on is that we had two people, each with a different kind of intelligence, because there is not just one, but several.

The theory of multiple intelligences was first proposed in 1983 by Howard Gardner, a professor at Harvard University. This theory is founded on the idea that there is not one intelligence, understood as an ability to solve problems and create valuable goods, but rather, various types that are interrelated.

Gardner and his colleagues at Harvard University proved that there are people who get good grades at university and who get a good academic record, but who do not know really know how to relate to other people.

On the other hand, there are people who are not the best students, but who relate really well with the people around them. This fact demonstrates that it is not a matter of one person being more intelligent than another, but rather, of them having developed different intelligences.

“The true sign of intelligence is not knowledge but imagination.”

Gardner and his team came up with eight different types. Each person possesses each one of these to various degrees and also combines them in a different way than other people. That way of mixing the different intelligences is what makes us unique. The eight intelligences that Gardner spoke of are the following:

This is the ability to employ words efficiently, using the structures of language, phonetics, semantics, etc. People like politicians, poets, writers, and journalists tend to develop these kinds of ability through the use of the word both in written and spoken form.

This is related to the ability to employ logical reasoning and solve mathematical problems. The speed at solving these kinds of problems is the indicator that determines how much logical-mathematical intelligence a person has. Scientists, mathematical engineers, and economists tend to stand out in these sorts of fields.

This is the ability to create mental images, draw, and notice details, along with a special sense for esthetics. These kinds of abilities can be found in painters, photographers, designer, publicists, architects, copywriters, etc.

This is related to musical skills, like rhythm and melody. It helps us create new sounds, express emotions and feelings through music. This intelligence makes musicians, singers, composers, orchestra conductors, dancers, etc. stand out.

This refers to everything related to movement, both bodily and that of objects and reflections. It is used in activities that require coordination and controlled rhythm. This is easily seen in dancers, surgeons, craftsmen, and athletes.

“Creativity requires the courage to let go of certainties.”

This refers to our own self-awareness, the processes related to trusting and motivating ourselves. It is used to understand what we do and to value our actions. A strong development of this intelligence can be found in theologians, philosophers, and psychologists.

This is the ability to relate with other people. It includes the ability to use gestures, control your voice, and use facial expressions. Actors, politicians, professors, and the like are strong in this intelligence. It is very valuable for people who work with large groups because they know how to detect and understand problems with others and they will learn to manage the group.

This is the ability to distinguish, classify, and use elements of the environment, objects, animals, or plants. People who are strong in this area demonstrate a great skill for observing, experimenting, and elaborating conclusions. People who work with this include ecologists and botanists.

“Rhythm is the most important thing because it is magic, which invites the audience to dance, and what I want are readers who dance with my words.”

Gardner claims that everyone possesses all eight of these, but there is always one that stands out more than the others. In life, it is advisable to learn to master a large number of these eight intelligences, independently of our profession.

In our daily lives, it is rather common for us to feel stressed out or have anxiety. We carry out…

If you've hit rock bottom, don't let it scare you. If you've reached the limit of your strength, if this last…

At first, they seem like the friendliest people in the world. They tend to be sociable, good conversationalists and have…

Learned helplessness is one of the worst holes we could ever fall into. It is the perfect breeding ground for…

Psychology
The Link Between Negative Emotions and Chronic Pain

It's pretty easy to see the relationship between pain and feeling bad on an emotional level. Who hasn't bashed their knee and then…