What Happened to Baby Jane? When Hate Turns into Art 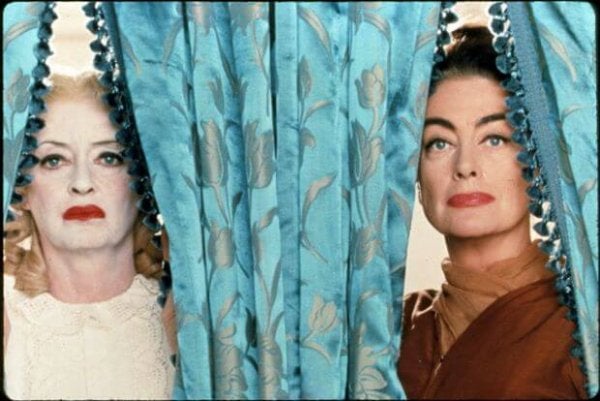 Bette Davis and Joan Crawford: two famous actresses, a lot of talent, and a lifelong feud. But why did they hate each other so much if, deep down, they weren’t so different? They both had bad relationships with their daughters, their romantic relationships fell apart, and they both turned to drinking often. There’s no doubt this is the most talked about Hollywood feud of all time. The kind that, even with all the uproar, gave us a cinematic treasure: What Ever Happened to Baby Jane?

The truth is that these actresses’ lives themselves seemed like they were straight out of a movie. Baby Jane was a huge success, and people still see it as a classic. Today, the movie has all its old glory due to the series: FEUD: Bette and Joan. The show recreates the feud between the two actresses. And also the problems they had during the shooting of their film.

It’s a fact that young people don’t really like watching movies in black and white. It almost seems like we’re allergic to them. Like it’s just too much effort for us to watch movies that are completely in black in white. But part of the magic of these movies actually comes from the very fact that they’re not in color.

When we think of horror films what comes to all our minds are images of demonic possession, special effects, cursed houses, and gore. All that started in the 70s, when movies like The Exorcist came out and changed horror films forever.

Up to then the absolute master of horror was Alfred Hitchcock. Most of his films had been shot in black and white, and people were used to a different kind of horror. It was more subtle, more psychological, and almost all of it depended on the actors, on the music, and on hinting at things without ever showing them outright.

“Sure, Bette Davis stole some of my big scenes, but the funny thing is, when I see the movie again, she stole them because she looked like a parody of herself, and I still looked like something of a star.”

Is Baby Jane hate or horror?

Now all of that has changed, and most of us wouldn’t think of Baby Jane as a horror film. But that’s what people saw  it as when it first came out. And the truth is that there’s not much need for special effects for Bette Davis to torture you with her eyes, or for you to feel anxious when Blanche (Joan Crawford), stuck in a wheel chair, desperately tries to get her neighbor’s attention or pick up the phone to call for help.

Is there anything as awful as hate? If someone hates you, they’ll be capable of anything, and that’s especially true if they’re losing their mind, like in the film. The fear and anxiety in the film all fall back on that hate, that bitterness, and that eternal rivalry. When you hate someone you might become irrational. You won’t care about the damage you could cause, and you probably won’t think about the consequences.

Baby Jane tells the story of two sisters whose glory days have gone. People have forgotten them. One of them, Blanche, is stuck in a wheelchair and depends entirely on her younger sister, Jane (Bette Davis). Not long ago Jane lost her mind from of all the guilt she felt about leaving her sister paralyzed. She spends her time reliving her glory days in her head, feeling like she can go back to being a girl again. Like she can sing and dance alongside her father while the audience adores her.

The hate between them, along with the bitterness and selfishness, are the main characters in the film. Almost exactly like real life. Baby Jane opens with Jane as an artist who’s egocentric and spoiled by the father who abuses everyone around him, including his family. Then there’s her older sister, Blanche. She watches Jane beside her mother, rarely speaks, and feels pushed aside. But the film shows how Jane’s favorable treatment makes Blanche into a strong woman capable of overshadowing her sister. She ends up becoming a true movie star.

“You should never say bad things about the dead, only good… Joan Crawford is dead. Good.”

Jane, on the other hand, is forgotten by just about everyone. She has no talent, and she hates her sister for stealing all her attention. Blanche and Jane are two eternal rivals. Even though Blanche seems to show some compassion towards her sister the film shows it wasn’t always that way. The movie leaves you with extremely disturbing scenes like the food Jane prepares for her sister. Or the song “I’ve Written a Letter to Daddy.”

You can just feel the tension and the hate through the screen. This might be because Jane and Blanche’s story isn’t so different from Bette and Joan’s. Hate, transformed into art, turns into something worth admiring when you watch movie. And it’s a hate that was completely real. There’s a lot said about what happened on the set of Baby Jane. There was the Coca Cola machine put in by Davis to compete with Crawford’s Pepsi. There was Davis really hitting Crawford during a scene. And there was even the time when Crawford decided to add weights to her costume for the scene where Davis has to drag her.

The rivalry was so intense that Crawford fixed things so Anne Bancroft would get the Oscar for best actress. Davis was nominated for the same award that year for Baby Jane. Crawford did it to take away her spotlight.

FEUD: Bette and Joan, bringing back the story

Their rivalry recently came to TV through the series, FEUD: Bette and Joan. The veteran actresses Susan Sarandon and Jessica Lane play their parts. Ryan Murphy directed the series. It takes you back to the shooting of the film and shows you another side of the coin. The side of the media and the Hollywood industry from back then. It was an industry where women played second fiddle and hardly had any opportunities. And especially not when their beauty and youth dried up.

In the series you’ll see how, maybe, the press actually fueled their rivalry. It was more interested in the insults they threw at each other than their skills as actresses. Maybe if things had gone differently they wouldn’t have ended up being such bitter rivals. The sad truth is that Hollywood wanted them to be. It was the perfect advertising for a film that didn’t have a very high budget or a very well-known director (Bob Aldrich).

The series FEUD has captured some of the most interesting moments from the lives of these two stars. And in that way it has brought Baby Jane back into the public eye. But beyond just bringing back Davis and Crawford, it’s also got an amazing cast. The two who stand out here are Sarandon and Lange. They are approaching old age, just like the actresses they’re playing. But that doesn’t stop them from showing that they’ve still got all their talent.

The cleverness of Baby Jane

Baby Jane tried to reintroduce two actresses who didn’t bring about any interest in younger audiences. They were up there in years and their careers had stalled. That’s why Baby Jane was a risky idea, and why they needed to sell it to people with something else. In this case, it was by fueling the rivalry between the two stars and then shining a spotlight on them.

Hate, just like love, can turn you into an irrational person. Both things are capable of altering your perceptions. You see what you want to rather than what’s actually in front of you. Hollywood didn’t care about happiness or morality. What was important in that industry, just like in most big businesses, was selling a product.

“If you hate a person, you hate something in him that is part of yourself.”
-Hermann Hesse-