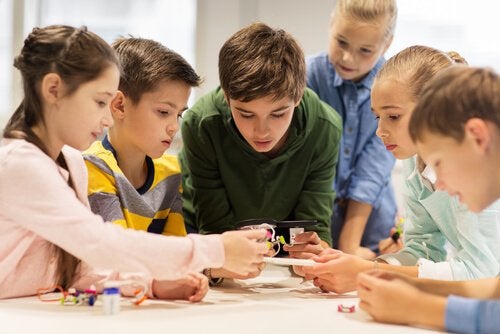 At the beginning of the 20th century, after the socialist revolution, a new school of psychology was born out of opposition to North American capitalism. One of the first problems it aimed to solve was to find a new educational system that could rise up to its demands. The most significant figures in this new form of Soviet psychology, and creators of a revolutionary system of education, were Vygotsky, Luria, and Leontiev.

They viewed education as a central issue, a tool the following generations would need to carry on the revolution they’d started. Today, their scientific studies are considered highly rigorous precursors of an educational revolution. In this article, we’re going to explore their approach by looking at their ideas about communication, development, and the goals of education.

The model of communication

The first problem with education they saw during that time was the lack of communication in the classroom. They saw that students were passive agents in their own learning because communication was unidirectional, from teacher to students. The model of teaching was for the teacher to transmit their knowledge to the students. Then the students would absorb the information without questioning it.

These three Soviet psychologists broke down this notion, looking instead towards a constructivist style of education. In this model, students construct their own knowledge. In other words, they are active subjects in their own learning.

They did away with the unidirectional model of communication. For students to be able to construct their own ideas, the classroom needed to become a space for debate. Communication should occur freely from student to student, and from student to teacher. Both parties should be prepared to speak and listen.

The function of the teacher in this type of classroom is not to convey their all-knowing wisdom. Rather it’s to guide debate between students and foster learning. It’s an incredibly difficult task, but it’s been shown many times over that when learning is active, education improves significantly.

The importance of development

Another fundamental problem they observed was the lack of clarity on how learning and development are related. Vygotsky laid the foundation of this principle through his theory of the zone of proximal development (ZPD).

Vygotsky found it absurd to talk about learning as independent from the individual’s cognitive development. He proposed a theory in which development and learning reinforce each other in a cyclical way.

But what exactly is the ZPD? Before we go into more detail, it’s important to understand that people have two levels of ability. First, the competencies that we achieve by ourselves and, second, those that we achieve with the support of a tutor. For example, a student can complete a set of mathematical problems by themselves, but if they have the guidance of a teacher, they can solve even more difficult problems.

The ZPD is the difference between what a person is capable of doing with support minus what they can do by themselves. It’s the ideal range of development that the person can work within.

According to Vygotsky, the goal of education is to convert the abilities within the ZPD into abilities that the person can master without help. When this happens, the individual will develop a new ZPD where they can keep advancing. The cycle of learning and development will go on.

The goals of education

They concluded that the mission of education during that time was to provide people with labor skills. To teach people skills that would fit into the positions the market demanded.

In other words, education was meant to create a division of labor and allow people to fulfill the quota of their given job. With a few nuances and exceptions, you can see same thing happening in our educational system now.

This new approach in psychology sought to break that dynamic. Vygotsky, Luria, and Leontiev believed that all individuals should have the opportunity to develop their maximum intellectual potential.

That is, of course, keeping in mind that society will always need workers to sustain itself. In that regard, they believed that it would be ideal for students to participate directly in socioeconomic life. They proposed that students leave school periodically to perform the work needed to maintain society.

Today, it’s easy to see that there aren’t many differences between the system that these three psychologists fought against and the current one. In most classrooms, communication continues to be unidirectional, and we’re definitely not maximizing each student’s ZPD.

The revolutionary educational system proposed by Vygotsky, Luria, and Leontiev has fallen into oblivion. But why? Because the goal of education continues to exclude the development of each student’s potential. Our system seeks to create workers, just like factories create products.

If we really want to advance as a society, education is key. As long as we have an educational system that neglects our students’ personal development, progress will be impossible. But what can we do to solve such a huge problem? We’ll have to keep trying to answer this question through the scientific study of education and society.

Evaluations: Do Exams Evaluate Students Correctly?
The most common evaluations in schools today are exams. But are those really the best way to check our students' knowledge? Are there other ways? Read more »
Link copied!
Interesting Articles
Personality Psychology
Loyal People: Sticking to Your Principles

Psychology
3 Ways to Stretch the "Muscle of the Soul," the Psoas

The psoas, also known as the "muscle of the soul," is the deepest muscle in your muscular system. It plays…

Although not many people know about this new eating disorder, it's on the rise. Drunkorexia is a very serious eating…