Violence in Relationships: Stopping the Cycle

How does violence develop in a relationship and what can you do about it? This article examines the keys to this type of violence and identifies the main factors that tend to make it a lasting problem. 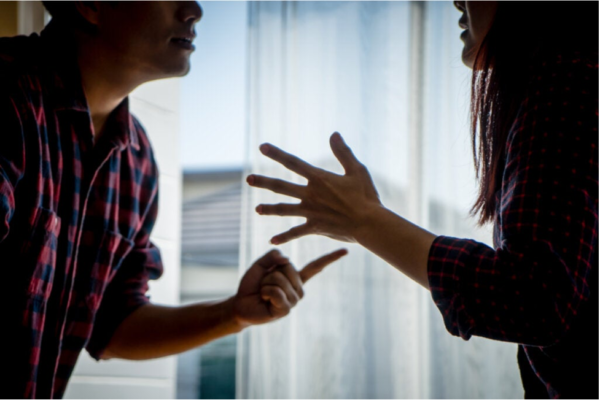 Couples express violence in relationships in different ways. For example, the couple might enter into a spiral of violence that ranges from physical and verbal to sexual violence. This can end up damaging one or other of the partners, affecting both their physical and mental health.

Relationships aren’t usually established within a context of violence. In fact, violence in a relationship usually emerges over time. It usually occurs when an unequal relationship pattern is established. This means that one partner tends to act in a submissive way (violated/victim), while the other partner acts in a more coercive way (violent/aggressor).

The characteristics of violence in relationships

Violence in a relationship is usually associated with social inequality and the victims are usually women. This violence can take many forms. It can range from physical and verbal violence to sexual violence.

A victim often feels particularly helpless when it comes to suffering sexual violence. This is because society still tends to perceive that sexual intercourse within a relationship is always consensual.

Controlling and dominant behaviors are another form of violence in relationships. Examples of this include isolating the partner from their relatives, monitoring their movements (who they visit, their daily schedules, etc.), and restricting their financial resources.

The escalation of violence

In most cases, the violence lies dormant at the beginning of the relationship and doesn’t manifest itself. In other words, it’s still there but in a different way. Indeed, it’s like just only seeing the tip of the iceberg.

The cycle of violence usually consists of three phases. These usually vary in both intensity and duration. The phases are as follows:

Tension. Minimal incidents that increase the tension occur in the relationship. This makes the possibility of an escalation to violence more likely.

Aggression. This varies in intensity. It happens after a build-up of tension. It usually ends in one partner being aggressive towards the other.

Honeymoon. At this stage, the person responsible for the violence usually feels remorse. They then tend to show affection for their partner. Indeed, they often promise not to be violent again.

Then, there’s usually another period of tension and aggression which ends once again with the violent partner feeling remorseful. In this third stage, the victim of violence often forgives their partner. They then tend to withdraw any complaints they may have made against the partner and end up giving them another chance.

However, the honeymoon period usually becomes shorter and shorter with each cycle of violence. In fact, in some instances, just the tension and aggression phases remain. Thus, unfortunately, when the aggressor does show any affection, the victim considers it such a rewarding and reinforcing experience, they find it very difficult to escape from the relationship.

Risk factors for the development of violence in relationships

Violence in general tends to be the result of several factors. These operate at four different levels: individual, relational, community, and social.  For this reason, it’s pretty hard to generalize the risk of the development of violent behaviors in relationships due to social and cultural factors.

However, some of the factors that can be generalized to all sectors of the population are as follows:

Effects of violence in a relationship on children

Violence can have even more serious effects in a relationship when there are children involved. The children might experience mood disturbances such as anxiety disorders, post-traumatic stress disorder, or depression. This isn’t necessarily just due to the child’s emotional environment. Indeed, poor school performance and physical health problems also tend to occur when there’s violence in their parents’ relationships.

In addition, children who grow up in this context are more likely to be violent with their partners in adulthood. What’s also of great interest is the early existence of violence in adolescent relationships. In fact, this phenomenon has frequently been observed.

How to prevent violence in relationships

Society needs to become more aware of this problem. Indeed, recognizing the different ways in which violence in a relationship can appear could help reduce it. In general, the strategies that can be carried out to prevent violence are as follows:

Prevention of violence is extremely important when it concerns the family and social environment. Furthermore, programs that educate on gender issues are equally important so children don’t learn to accept that violence is normal. Of course, it goes without saying that the most important form of prevention always starts with education. This way, everyone can learn effective forms of negotiation and communication. This means that they’ll never have to resort to violence as an alternative course of action.

Relationship Violence: The Story of Any Other Girl
This is the story of any other girl. A girl without a name, because there are so many of them. A girl who fell in love with who she thought was the best man Read more »

Link copied!
Interesting Articles
Conflicts
People Addicted to Conflict Are at War with themselves