What Torments The Happiest Man In The World? 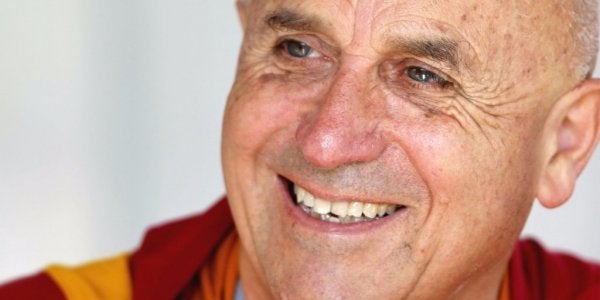 Matthieu Ricard is a Tibetan Buddhist monk involved in research on the effects of mental training on our brains done at the universities of Wisconsin-Madison, Princeton, and Berkeley.

Scientists from the University of Wisconsin have claimed that Matthieu is the happiest man in the world (or at least the happiest of all the people who participated in the study), after analyzing his brain activity during a 12-year study. The study focused on important factors like meditation and compassion.

They studied his brain functioning with different techniques and tools, one being functional magnetic resonance imaging (fMRI). They noticed a lot of activity in his left prefrontal cortex, which we associate with positive emotions.

These results, published in 2004 by the National Academy of Sciences, have had such an impact that they’re the fifth most highly consulted scientific reference of all time.

“Happiness consists more of the small conveniences of pleasures that occur every day, than of great pieces of good fortune that happen but seldom to a man in the course of his life.”
-Benjamin Franklin-

Making comparisons is what kills happiness

When you see someone who’s successful, you usually think the person was lucky. Like they happened to be in the right place at the right time. But you rarely see the whole process and all the sacrifices they had to make.

You only see the outcome; you’re not seeing the hard parts. In fact, you are really hardly seeing any of it. And that’s why when you compare yourself you end up with feeling inferior and dissatisfied.

“Everyone is a genius. But if you judge a fish by its ability to climb a tree, it will live its whole life believing that it is stupid.”
-Albert Einstein-

Research done by Andrew Oswald at the University of Warwick evaluated over 500,000 people across Europe and the Americas. They found that happiness comes with years. Basically the study developed the research from the University of Wisconsin that found the happiest man in the world.

The beginning of adulthood may bring optimism and joy. But things get gradually more complicated until there comes a crisis in our 40’s. In fact, studies done by institutes like America’s General Social Survey have something to say about it. The unhappiest people are usually between 40 and 50 and the happiest are in their 70’s.

And it doesn’t have much to do with income or health. Layard showed that once you reach an annual income of $15,000 dollars per person (or an equivalent purchasing power), an increase in a country’s GDP won’t have any impact on levels of well-being. Americans, he said, are richer than the Danes (on average), but they’re not happier.

On top of the age variable, daily meditation also contributes to happiness. Or at least that’s what science says. The meditation and compassion study revealed that 20 daily minutes of meditation is enough to increase your feeling of well-being.

While people were meditating, imaging showed high activity in the left prefrontal cortex, more than the right. This meant it helped people be happier.

What Makes Us Happy: A 76-Year Study
In 1938, Harvard University began "The Study of Adult Development". The study is still going, and it is one of the most complete in its field. Read more »
Link copied!
Interesting Articles
Culture
The Stress of Being a Housewife

We could devote hundreds of pages to the topic of stress itself. However, there are some people who are especially…

Henry David Thoreau says that people must really work on living deliberately. But don't we already? No, we don't. This…