Three Stories that Will Make You Think

These stories will make you think. They talk about the importance of moving forward, friendship, and prudence when making decisions. They're portraits of situations that happen to us daily. 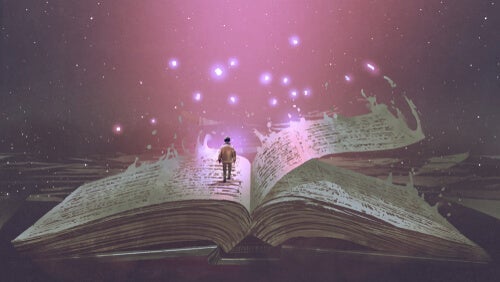 Some moral stories are like paintings: they portray human strengths and weaknesses like a real picture would. Their authors are unknown, but with the contributions of several individuals, these stories have become quite well-known. Basically, it doesn’t really matter who wrote them. What’s actually important here are the messages they send to the reader.

In today’s article, we’ll be showing you three stories that will make you think. The first one talks about how a wise man gives valuable teachings to those who turn to him. The second one talks about two friends and the meaning of friendship. Finally, the third one talks about a lion, the king of the jungle, who learns an important lesson during a hunt. Without further ado, let’s take a closer look at each story.

1. The wise man, one of the stories that will make you think

Some say that, in an ancient kingdom, there lived a man who was very well-known for his great wisdom. At first, he only advised his close family and friends. However, his became so famous that the sovereign himself called him frequently whenever he needed help.

On a daily basis, many people turned to him to receive his wise advice. However, the wise man noticed that several individuals visited him every single week. The worst part about this situation is that they’d always tell him the same problems and listened to the same advice but didn’t end up putting it into practice. In other words, they were stuck in a vicious cycle they didn’t want to get out of.

One day, the wise man gathered all those frequent consultants. He proceeded to tell them a funny joke almost everyone laughed out loud to. Then, he stopped and told the same joke once again. He kept telling it for three hours over and over. In the end, everyone was fed up. Then, the wise man asked: “Why can’t you laugh at the same joke several times but can cry a thousand times over the same problem?”

The second of our stories that will make you think tells that, on one occasion, two great friends decided to go on a journey through the desert. One trusted the other blindly and felt that there could be no better company. However, once they got tired, they started disagreeing on pretty much everything.

It all started with a disagreement but then they started arguing, which led them to have a heated debate. The situation reached such an extreme that, at one point, one of them hit the other. He immediately realized his mistake and asked for forgiveness. Then, the one who’d been hit wrote on the sand, “My best friend hit me”.

They continued on their journey and later found a strange oasis. They hadn’t gone in just yet when the ground began to move. The friend who’d been hit began to sink. They realized it was a kind of swamp. As best as he could, his friend risked his life by stretching out his arm so that he could save him. And so he did.

At that moment, the boy who’d first been hit and then rescued wrote on a stone, “My best friend saved my life”. The other looked at him curiously, so he decided to explain what he’d just done. “Among friends, offenses are only written so that they can erased by the wind. Instead, favors are marked deeply so that they’re never forgotten.”

This is the last of the stories that will make you think. Once upon a time, there was a proud but hungry lion. He hadn’t eaten for a long time. He knew that finding prey in the area was extremely difficult. For that reason, he knew that he had to be patient and cautious because, if he lost any prey that happened to appear, he wouldn’t find another one easily.

The lion stood very still behind a thicket. A few hours went by and nothing appeared. However, when he was already discouraged, a hare appeared in a nearby area. There was a pasture and the hare, very carelessly, went out to eat the grass. The lion was aware of how fast hares were, so he had to launch a forceful and sudden attack. Otherwise, surely, the hare would escape.

He waited a while and was ready to attack. Just as he was going to pounce on his prey, he suddenly saw that a beautiful deer was walking a few meters away. Of course, his mouth instantly watered. In a couple of seconds, he changed his plans and attacked the deer, who’d had time to see him and, as a result, immediately started running. The hare, of course, ran away. This story teaches a great lesson: don’t lose what you already have for something that seduces you but that you may not get.

Three Amazing Short Stories to Think About
In this article, we bring you three amazing anonymous short stories to think about. All of them aim to provide a valuable lesson. Read more »
Link copied!
Interesting Articles
Stories and Reflections
The Most Beautiful Flower - A Japanese Fable

Therapeutic metaphors for depression are often used in approaches such as acceptance and commitment therapy. The goal of these metaphors…