Discover the psychological difficulties that affect couples in this article! 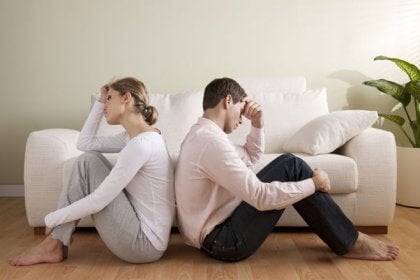 When you have underlying issues to address, you’ll most likely have issues with other people as well. In particular, it’s clear that there are some psychological difficulties that affect couples, subjective issues that prevent a relationship’s good development.

The problem is that you may be trying to fill a void or solve a personal issue by putting all its weight on your partner without even realizing you’re doing it. And this is unproductive; not only do you not get what you want, but you’re also harming your relationship with neurotic expectations.

It’s complicated because it all happens unconsciously. You never seem to identify the psychological difficulties that affect your relationship and only see the consequences, usually looking out for the problem’s cause elsewhere instead of within yourself.

“We must not seek happiness in peace, but in conflict.”

Emotional unavailability is without a doubt one of the main psychological difficulties that affect couples. It’s the lack of emotional disposition to take care of your partner’s needs. In other words, the emotionally absent person feels indifferent to whatever happens to their partner.

Many times this doesn’t happen deliberately. Maybe the emotionally absent person grew up in an environment in which they were the center of attention. Or maybe the opposite: they suffered the consequences of emotional abandonment as a child. In both cases, they can’t establish a close bond with other people.

Sometimes, these obstacles tend to disappear for a while and then come back again. That’s when one partner, or both, live in their own bubble, unable to see the other person’s needs. They’re so self-centered that they can’t see beyond their own needs.

2. Seeing Your Partner as a Parent

This is another psychological difficulty that affects couples. When a person is growing up, they must detach themselves progressively from their parents, which leads them to become more independent and aware of their ability to choose their own fate.

Unfortunately, this doesn’t happen for everyone. If someone was brought up in a co-dependent parent-child relationship, it’s very likely that the person won’t seek a partner, but instead someone to protect them, support them, and take care of them. This is how the couple roles become confusing.

Then, that “someone” might start demanding more and more things from their partner. Not only do they ask for emotional availability, but unconditional support as well. Besides, they may even expect their partner to be in charge during tough times or for them to deal with the relationship’s problematic aspects, just like a parent would.

3. The Tricky Balance between Giving and Receiving

This is a difficulty that oftentimes appears at the same time as the other two. It has to do with a lack of equality between giving and receiving. An excess of any of these aspects has the potential of harming the relationship.

Some people put their effort into giving their all. They take this behavior to extremes and end up “suffocating” their partner with all their attention and absolute availability. They don’t give their partner the opportunity to give or contribute something to the relationship. It’s also common that, at some point, whoever’s giving too much expects the other to do the same. If this doesn’t happen, they feel disappointed. In order for a bond to stay strong, there must be space to want and miss each other.

Furthermore, there are also those who only want to receive. They’re grown-ups with childish expectations. They don’t expect love, but instead want to be “adopted”. Thus, the receiver feels like it’s their partner’s duty to compensate for their own vulnerabilities.

Psychological difficulties that affect couples are incomplete individual processes or journeys. Adult love demands kindness, maturity, patience, and flexibility. All this has to be mutual in order for the relationship to grow strong. If this isn’t the case, it can lead to neurosis.