Is There Such a Thing as WhatsApp Addiction? 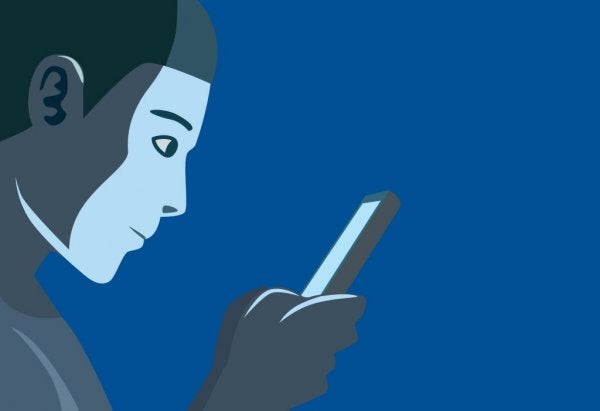 Internet addiction, WhatsApp addiction, Instagram addiction, online dating addiction… Without a doubt, people will remember the 21st century due to the addictive, repetitive behaviors regarding technology that characterize it. This is a new and growing phenomenon. In this regard, other types of addictions, particularly those related to technology, are likely to emerge in the coming years.

This happens because all pleasurable behaviors, by pure intrinsic reinforcement, tend to repeat themselves. These behaviors, therefore, are likely to become addictive behaviors. However, addiction only occurs when the person shows a habitual loss of control when they do that behavior. In addition, the addiction continues despite whatever negative consequences result from it. This is exactly what happens when a person has a WhatsApp addiction.

It’s important to remember that the fundamental components of addictive disorders are a loss of control and dependence. Thus, addictions aren’t limited to behaviors that include chemical substance abuse.

In fact, there are apparently harmless behavioral habits that can become addictive, such as using technology. The truth is that when we use something repetitively and make its use a priority, it can literally destroy our quality of life.

Jan Koum founded WhatsApp in 2009. Koum came from Ukraine to the United States in the early 1990s. He spoke very little English when he became the director of the Yahoo! platform operations team.

This app became popular in very little time. Nowadays, it has more than one billion users. The WhatsApp servers never get to rest. 42 billion messages are sent through WhatsApp daily. Through WhatsApp, people send 1.6 billion photographs and more than 250 million videos daily. This data gives us an idea of how popular, and therefore powerful, this app is today.

Drug dependence usually refers to an addiction to a chemical substance. However, there’s currently enough clinical evidence regarding psychological addictions, as in the case of WhatsApp addiction.

It’s not an exaggeration to point out that certain behaviors, such as pathological gambling, dependence on social networks, and addiction to food, can all be considered addictions. When someone shows a strong psychological preference towards a behavior, they can begin to act with anxiety and impulsivity. As a result, they lose interest in any other type of rewarding activities. Those activities go to the backburner. Thus, the addiction kidnaps the person.

It’s not strange to see people using WhatsApp all the time. It doesn’t matter where the person is either. People use WhatsApp, like other mobile apps, anywhere and anytime. Its availability is immediate and its use is very rewarding. This gives us an idea of the addictive power it has.

What’s the progression of WhatsApp addiction?

As in any other psychological addiction, here is how users become addicted to WhatsApp:

As a result of all of this, using WhatsApp becomes an automatic necessity. Its use is tied to their emotional wellbeing and the addicted person retains very little control over their actions. The person ponders the benefits of immediate gratification, but they don’t take into account the potential long-term side effects and consequences.

There are two main negative consequences of being addicted to WhatsApp and other social media sites. One of those consequences is being isolated from the environment. The other has to do with not paying attention to other social aspects, such as work or school obligations. Our relationships begin to deteriorate, including romantic ones.

As we have seen, besides physiological addictions (tobacco, alcohol, cocaine, etc.) there are also psychological addictions. A perfect example of this is WhatsApp addiction. The effects of compulsively having to use this application can be very harmful to our social wellbeing. It’s rather ironic that a social app can be socially harmful and can restrict and deteriorate our social life.

6 Things Technology Has Stolen From Us
There is a very fine line between using technology for necessary things and being dependent on it. Read more »
Link copied!
Interesting Articles
Culture
Adelphopoiesis: Same-Sex Unions

Same-sex marriage is a contemporary possibility in our society. However, it may not be if we abide by the examples…