The Young Minds of Superagers

Have you heard about the young minds of superagers? These older people whose memory is pretty intact seem to hold the secret about cognitive aging. Continue reading to find out more about it. 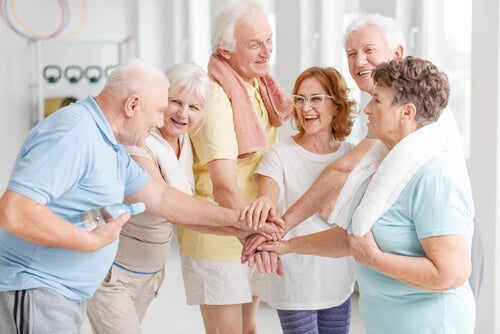 The young minds of superagers belong to a group of people who retain their young minds and have a higher performance than other people of their age. As you may already know, human cognitive abilities begin to decline as people get older. Thus, reasoning abilities, memory, and processing speed, which reach their maximum performance in adulthood, become impaired as a person ages.

This name applies to those who are 80 years or older and whose memory is as good as those who are 25 or 30 years younger. Of course, this generated interest in the scientific community. Especially when they noticed that, in addition, these people led active lives and didn’t show signs of fatigue. Thus, there’s a possibility that these people might even have a different genetic makeup.

The young minds of superagers make them special

In general, superagers are indeed special. This is because their abilities are higher than what’s usual for their age. In this respect, some experts separate them into two categories: physical superagers and cognitive superagers. The people in the first group have a fantastic aerobic capacity. The latter group has an excellent memory, comparable to that of younger adults.

Similarly, it’s more or less clear that both groups are more resilient when faced with life’s adversities. Researchers even studied whether their personality characteristics include being more extroverted and less neurotic. This would mean they deal with challenges differently. Perhaps they even lean towards activities that enhance their brain capacity. It could be in the form of physical activity or other types of stimulating activities.

It isn’t clear why only some older people have these characteristics. What’s clear is that researchers around the world are trying to find out more about it in order to be able to help adults who don’t. In fact, they already got good results regarding what differentiates them. Thus, why they’ve reached such a level of cognition.

A different kind of brain

Researchers are mainly focused on studying the young minds of superagers. One of the discoveries they made is related to the amyloid-beta protein. This protein is naturally present in the brain and often clumps into plaques. This is key when it comes to Alzheimer’s disease.

Thus, they noticed a greater presence of beta-amyloid and even plaques in the brains of superagers. However, their cognitive and memory capacities were intact in spite of it.

Furthermore, it seems that these “super-elders” have more Von Economo neurons than their average peers. These neurons are a special type of cell that apparently served to meet the demands of a larger brain during evolution. Throughout their development, they became a center of emotion, sensitivity, and emotional intelligence.

Thus, researchers found more neurons of this type in three brain regions of the superagers.

You’d expect these people to also behave differently in social settings if you take into account the brain characteristics that differentiate them. In fact, a study from the University of Chicago compared a group of superagers with a group of their peers who were similar in terms of personality, well-being, and memory.

They observed similar levels of well-being in both groups. However, superagers scored higher on the Positive-Negative Relationship Quality Scale. In other words, they showed greater satisfaction and quality in their relationships. This finding fits with greater development of the Von Economo neurons and the anterior cingulate cortex, establishing itself as a key point in the preservation of a person’s mind.

In addition, it corroborates a large field of research that’s been confirming that social activities and positive interactions are very beneficial for cognitive health. Not only due to the importance of social support but because, when humans interact with one another, they activate their entire brain and enhance some cognitive skills. Among them, memory, attention, and decision-making.

Therefore, how can people retain their young minds and be superagers? This isn’t clear yet. In fact, genetic differences have been observed in this youthful group. However, if you take their characteristics into account, once again nature and research remind you that the secret to being healthy is to be physically, mentally, and socially active.

The Triune Brain: Three Brains, One Person
The triune brain is a concept that neuroscientist Paul MacLean developed to refer to the three parts or specialized brains in human beings. Read on! Read more »
Link copied!
Interesting Articles
Psychology Today
The Phenomenon of Influencers in Social Networks

In the business world, it's important to get to know the work environment inside and out, as well as all…