The Theory of Dyadic Formation and Couples

The theory of dyadic formation suggests that a couple is built through stages. According to this approach, when these stages aren’t fully experienced, the relationship will end sooner or later. 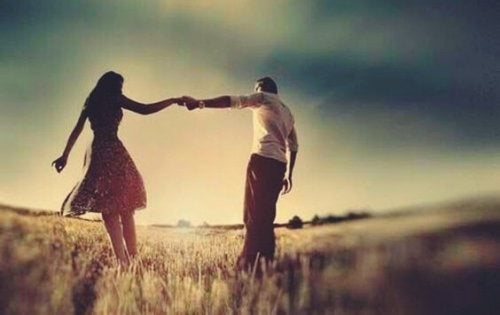 The word “dyad” in the theory of dyadic formation refers to groups of two people, such as relationships between partners, lovers, close friends, siblings, etc.

The term was coined by German sociologist Georg Simmel, who studied the dynamics of small groups. He discovered that groups of two are different from groups made up of more people.

In principle, the theory of dyadic formation is a conceptual construction of the systemic approach to psychology. Basically, it can be applied to couples and family therapy. It states that every romantic relationship must go through five phases.

Phase one: Perception of similarity and attraction

This stage explains the tendency people have to look for others like them and to concentrate on matching features.

According to the theory of dyadic formation, when people discover similarities, attraction arises. Subsequently, this leads them to seek more and more similarities.

After the first phase, a couple may feel that they’re alike in many ways and that they understand and complement each other. This leads to enthusiasm and, little by little, to passion.

This stage is all about eroticism and sexuality. After all, both partners’ hormones are going crazy. Furthermore, the feelings are intense and there’s a strong idealization. Unfortunately, this stage doesn’t last very long.

Gradually, both partners start detecting that paradise is transient and that their lover isn’t as perfect as they once were to them. This leads to the stage of serene love.

During this stage, both partners perceive their own limitations as well as their partner’s. This means that the idealized image they had of each other begins to give way to a more realistic perspective.

Yes, your partner has many defects and yes, they can be annoying sometimes. However, when a relationship has a good foundation, love and passion keep going strong. Otherwise, the feelings will lose intensity.

Some define this stage as going from “I love you” to “I want to love you”. In other words, moving from passion, to feeling, and then to a conscious decision. The most important factor here is reason and will.

This is when both partners understand that they’re not perfect but still want to stay together.

The theory of dyadic formation states that, during this stage, our hormones are no longer making our decisions for us.

The fifth and final stage corresponds to the formalization of the relationship for the establishment of a mutual commitment. Moreover, this is the moment when both partners make long-term plans together. In addition, they renounce to living as individuals and give their partner a permanent place in their lives.

The dyad is totally formed at this stage. It’s a system with its own structure, dynamics, norms, routines, dreams, and limits.

The theory of dyadic formation states that relationships survive only if they’ve gone through all the stages. For example, if you go from passionate infatuation to commitment, your relationship probably won’t make it.

Positive People: The Fuel of Healthy Relationships
Positive people always fill your heart with the purest joy. They try to make your life less complicated and always think about your well-being. Read more »
Link copied!
Interesting Articles
Romantic Relationships
How Long Does Falling in Love Last?

Falling in love is an emotional state characterized by a feeling of joy, fulfillment, and satisfaction caused by an attraction…

Helping others is considered a great thing. If you're altruistic, you love improving other people's lives. Society tries to reward these kinds of people. Nevertheless, is it always a good…

Romantic Relationships
Are Women Who Play Hard to Get More Attractive?

Women who play hard to get tend to create obstacles during the love conquest. Traditionally, people think that this attitude…