What message was M. Night Shyamalan trying to communicate in his classic film The Sixth Sense? In this article, we revisit the movie to discover the message behind the suspense, the one that connects with the deepest of human emotions. 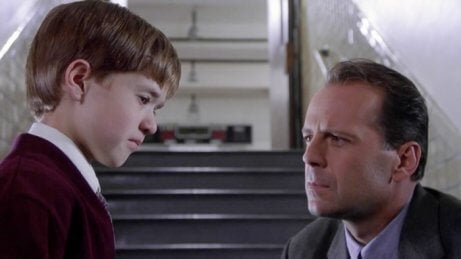 In 1999, The Sixth Sense premiered, making previously-unknown Indian filmmaker M. Night Shyamalan famous all over the world. This supernatural suspense film still holds a special place in its genre. The critics and the public alike loved it, so much so that it received six Academy Award nominations.

Shyamalan surprised audiences with a story that could fit into the horror genre. The movie also deals with subjects like the fear of death and the pain of loss that are unusual to see in horror movies. The Sixth Sense tells a story that keeps you on the edge of your seat and ends with a moving message.

The most famous part of The Sixth Sense is the plot twist at the end. Shyamalan left a lot of clues along the way, it was just a matter of putting the pieces together and making everything fit.

For those who are familiar with this particular director’s filmography, this kind of plot twist isn’t surprising. Shyamalan has experimented with this kind of ending in other films such as The Village (2004) and Unbreakable (2000). These endings have become Shyamalan’s trademark and make for an interesting experience for the viewer.

The Sixth Sense is an easily recognizable and extremely popular movie. Consequently, it’s also the subject of countless parodies. One example is that unforgettable line from Cole (Haley Joel Osment): “I see dead people”. The fact that this quote is so famous shows that the movie is a fundamental part of our popular culture.

In this article, however, we aren’t going to discuss that particular issue at length. Instead, we’ll focus on delving a little deeper into the film’s message and try to answer the question why supernatural films have so many followers.

WARNING: Do we have to talk about spoilers for such a well-known film? Just in case, consider yourself warned that this article is full of them.

The Sixth Sense is a story set in modern times. The movie makes it very clear from the beginning by introducing contemporary issues such as bullying or divorce. Although we’re more used to talking about these problems now, in the 90s they were somewhat taboo.

Don’t forget that divorce wasn’t legal in many countries until well into the 20th century. Thus, many children who grew up in the 90s experienced divorce or had friends who were going through it.

So even though divorce was fairly common when The Sixth Sense came out, it was still something that people were getting used to. Most people didn’t know what kind of consequences divorce would have on children and didn’t have many examples of that new kind of family structure.

In the movie, the big driving force behind separation and divorce is that Dr. Malcolm Crowe (Bruce Willis) prioritizes work over family. He’s afraid that he has lost his wife because he’s spending too much time at work. However, what he’s truly afraid of is death, but he denies that to protect himself.

The Sixth Sense shows us Cole and his mother’s day-to-day life after his father leaves. We see his problems and struggles and learn how it affects his life at school. Cole’s mom is trying to help her son, who seems to have a lot of problems.

Bullying isn’t approached in the same way now as it was then. Today, schools and families are more aware of bullying and better equipped to deal with it. In The Sixth Sense, bullying still flies under the radar. Likewise, these days people don’t associate going to see a psychologist with insanity.

Thus, watching this film through a modern lens makes the viewer even more engaged in the suspense on screen and Cole’s relationship with death. Throughout the movie, this relationship will make the characters learn about the true value of life and the importance of remembering loved ones and also letting them go.

With expert character development and an air-tight script, Shyamalan tells a story with a context that feeds off reality with suspense.

The belief in life after death might seem scary, but it’s actually a response to a particular desire. The idea of eternal life is important for many religions, for example. Whether it’s the existence of heaven or reincarnation, the idea of life after death seems to make this life easier. It makes it easier to say goodbye because you hope that you’ll eventually be reunited with your loved ones.

Film and literature play with the idea of what happens after death. People tend to be more afraid of the dead than the living because death is unknown and mysterious. The unknown is what you’re afraid of.

However, all these movies that feed on fear also offer hope in their own way. If evil spirits exist to torment us, then that means that death isn’t the end of everything.

In The Exorcist and other horror movies, these contrasts assuage our fears. If evil exists, then so does good. If there’s life after death (even if it’s in the form of ghosts and demons), then you don’t have to fear death so much.

The Sixth Sense feeds off that fear and also plays with hope. Not all of the ghosts that appear to Cole are scary. He also sees his grandma, although we never see her on screen.

In the movie, Cole faces his fear and discovers that his mission in life is to use his gift to help others. He helps the ghosts find peace and continue on their way. You can see the influence of the Hindu spiritual tradition in Shyamalan’s film as he explores fear, anxiety, pain, and hope.

The story plays with your emotions. It uses pain and tension to connect you to your deepest emotions. Everyone fears death, everyone mourns losing a loved one, and everyone is afraid of something. Your life is a path full of obstacles that you have to face and overcome, just like the people in the movie.

The Sixth Sense moves at a fairly slow pace, except for the scary moments scattered throughout the movie. The interesting thing about these moments (common in horror movies) is that they turn out not to be as terrifying as they seem at first.

The Sixth Sense: Beyond Suspense

The tension is palpable from the get-go. The evils of contemporary life control the characters.

The movie touches on suicide, loss, blame, abuse, and anxiety. But beyond all of that, beyond suspense, The Sixth Sense is a story of friendship and love. It’s about remembering those you’ve lost, but accepting that they’re gone and letting them go.

Cole and his psychologist help each other. They learn important lessons and become close friends. Dr. Crowe finds his path in death and Cole finds his in life.

The ending is surprising and gives hope for the characters’ futures, although they are in different worlds. The characters in The Sixth Sense overcome pain and obstacles by talking about their problems and reconciling with their loved ones and with themselves.

I remember that the first time I saw the movie I got carried away by the suspense. I focused on the scary things that were happening to little Cole. Years later, after watching it again, I enjoyed it in a very different, less frightening way.

Time hasn’t damaged The Sixth Sense, whether you know the ending or not. Shyamalan gives the viewer the gift of a horror film that manages to also be beautiful.