The Six Degrees of Separation Theory

The six degrees of separation theory captivated millions of people, among them mathematicians, sociologists, and physicists who together laid the foundation for the first online social network. 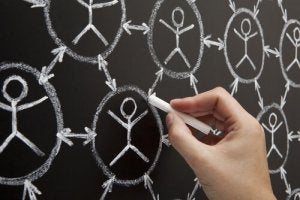 The six degrees of separation theory states that any inhabitant of the Earth could meet anyone in the world with a maximum of six or fewer mutual connections between them and another person. Be it through acquaintances, friends, or members of their family.

On this note, have you ever consider how easy it would be meet your favorite writer. Or, perhaps, the members of the band that you’ve been a fan of for years. Well, according to the six degrees of separation theory, it’s doable.

With this theory, we can get to any person on the planet through no more than five intermediaries. For example, imagine that you want to meet Will Smith and that, perhaps, you have a relative who works in an advertising agency.

Further, maybe your current boss, who once lived in LA, knew an artist representative that frequented their neighborhood’s coffee shop. And they, in turn, work with a musician who sometimes collaborates with the television show The Fresh Prince of Bel-Air. Indeed, it sounds convoluted, but you’d be surprised by how easily you can make contact with the actor if you try.

The origin of the six degrees of separation theory

This interesting theory was initially suggested by Hungarian writer Frigyes Karinthy, in the year 1930, in a story called Chain-Links. According to the writer, the idea of the six degrees of separation theory is based on the fact that the number of people known grows exponentially with the number of relationships in the chain.

So, as per this theory, one only needs a small number of links to get to anyone in the world.

Moreover, there is a discussion at length in regard to this concept in sociologist Duncan Watts’s book Six Degrees: The Science of a Connected Age.

“One of the most powerful networking practices is to provide immediate value to a new connection. This means, take action as soon as you identify a way to help someone.”

The way it works

Of course, the six degrees of separation theory has a formula and it establishes the average number of people that every person may know.

According to the theory, each person in the world knows about 100 people among friends, family, and co-workers –although in principle, it may be difficult to list a hundred people we know.

Still, you could have a quick look at the list of friends in any of your social network to realize that it isn’t only possible but quite common.

Well, if each one of your 100 acquaintances is connected somehow to another 100 people, then, the number would increase to 10,000 in just the second link in the chain. However, you don’t really know most of those thousands of people. Yet, they would be easily accessible by asking your friends or family members to introduce them to you.

Of course, this theory also considers that, of your 100 personal connections, none might have a mutual connection with the 10,000. However, this is not the case in the real world. You must also consider that it’s quite likely for many of your acquaintances to be, in fact, connected to more than 100 people. So, this would balance it all.

This amount far exceeds the total population of the planet. So the relationships that the members of the chain have in common could be compensated without problems.

Six degrees of separation and networking

This concept is closely related to that of networking. Thus, it’s a professional and business practice based on the creation of a solid and useful network of contacts. In addition, because networking is a fairly effective way to get a job; then, it’s highly encouraged among university students hoping to integrate into the job force.

At this point, the six degrees of separation theory comes into play. It’s a way to establish interesting and profitable professional relationships.

As you can see, through only five connections, you have gone from the hotel doorman to the president. Note that, such connections don’t necessarily have to be too close or intimate. In fact, in most cases, they won’t be. Further, you don’t need intimate connections in order to establish a relationship with a mutual acquaintance.

Having the skills to establish a relationship with anyone in a seemingly simple way is incredibly useful for professional opportunities. Also, it’s sort of entertaining to think about how many relationships you might need to be able to reach just about anyone in the world.

Use the Hanlon Principle to Communicate Better on Social Networks
Social networks have revolutionized our way of communicating. A few years ago, it was unthinkable for us to talk to our friends in almost real-time Read more »

Barabasi, A.-L. (2003). Six Degrees of Seperation. In Linked - How Everything is Connected to Everything Else and What it Means for Business, Science, and Everyday Life.

The lesson of the wooden sculpture of the Toshogu sanctuary, those famous three wise monkeys, inspires us still today. Its original…