The Psychology of Goya's "Black Paintings"

What led Francisco de Goya to create such obscure pieces of art like the ones in Black Paintings? Keep reading this article to learn more! 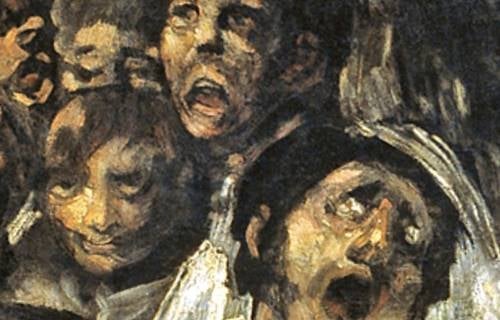 The psychology of Francisco de Goya‘s Black Paintings remains an enigma. This set of mysterious and gruesome paintings that decorated the Quinta del Sordo was created through a unique cosmogony, the product of a weary and desperate mind. It’s safe to say that they were determined by an interesting historical context marked by repression.

Now, was the torment that Goya suffered from a result of a psychological disorder? Or was it perhaps the result of that desperate time that brought him the age, deafness, and imminent violence of a troubled Spain? Maybe it was the combination of it all. One thing’s for certain: it’s impossible to ignore the creative universe of every artist. In every single canvas, they reflect their misfortunes.

The fourteen works that make up the so-called Black Paintings represented a notable change in his career. He went from light to shadow. Goya, who once was the master of color, ended up living in a home where darkness stained the walls. Despite having been the most outstanding portrait painter of the Spanish society of the Enlightenment, he ended up decorating his house with deformed, burlesque, and demonic faces.

Furthermore, perhaps those figures served to distract his mind from all the horrors he’d seen in the past. As a consequence, Goya anticipated contemporary painting without even knowing it. In the end, expressionism came as a result of that intentional deformation and the hue of a tormented, black soul.

The psychology of Goya’s Black Paintings

Mercury vermilion, orpiment, lead white, charcoal black, Prussian blue, and various types of ocher. These were the pigments that Francisco de Goya himself prepared and used to create those works at the Quinta del Sordo. Thanks to various historical documents and testimonies of the time, it’s possible to know the past location of these paintings.

Upstairs were Men Reading, Promenade of the Holy Office, Asmodea, The Dog, Atropos (The Fates), Two Old Men, and Women Laughing. Curiously, he painted the darkest and most overwhelming ones in the dining room, which was located on the ground floor and was used for social events. There was Saturn Devouring His Son, A Pilgrimage to San Isidro, Witches’ Sabbath, La Leocadia, Two Old Men Eating Soup, and Judith and Holofernes.

Although many of his guests were shocked by those images, he didn’t care one bit. It’s vital to remember that Goya was always that uncomfortable character for the Inquisition, for every ecclesiastical institution that saw him as an artist who didn’t hesitate to portray the perversions of those who abused power onto his art.

One of the goals of the psychology of Goya’s Black Paintings is to learn what led him to make them. Of course, we wonder about his mental state and whether or not he suffered from a mental disorder. However, we also wonder if he painted them out of pure emotional need, for simple enjoyment or if he wanted to leave a legacy (specifically to his grandson, to whom he bequeathed the Quinta del Sordo).

In order to understand his inner world, let’s analyze some aspects of his work.

To understand Goya’s Black Paintings, it’s convenient to talk about Los Caprichos first. These 80 paintings clue you into the changes in the artist’s life. At this time, an autoimmune disease afflicted him.

Susac’s syndrome appeared when he was 46 years old. Little by little, this illness started weakening his physical and psychological health. He had constant headaches, as well as dizziness and visual disturbances. All this created a new pigment in the art of this master, full of darkness and anguish.

Deafness was one of the neurological effects of this rare disease. His sensory powers were deformed, they lost verve, light, sound, and hope, just like the society that surrounded him. Los Caprichos was the first approach to the unconscious, to that internal world where he looked to capture the grotesque, the monstrous, and the fantastic like no one else had before.

In these paintings, Goya reflected on the superstitions of the simple people of the time; those who believed in ghosts, witches, demons, and overall nocturnal creatures that invaded the dreams of the enlightened.

The delirium tremens of a sickenly brilliant mind

Moreover, disturbing characters inhabit many of Francisco de Goya’s (1746-1828) works of art. Was this the reflection of a mental disorder? Absolutely. He was an artist who reflected the unreason of a debased society like no other, a society that surrounded him, which made him desperate.

Few figures of art transmitted inner torment, loneliness, fear, and despair the way Goya did. When he arrived at his country house La Quinta del Sordo, memories were still bubbling in his mind of the sound of the executions, and the pain of exile and disloyalty, among other things.

Dr. Ronna Hertzano of the University of Maryland explained something regarding Susac’s syndrome. Basically, it results in brain inflammation. In turn, it generates hallucinations and poor blood supply to the eyes and ears. Of course, this results in deafness, vision problems, and suffering.

There’s no light in the Black Paintings because there was no hope for Francisco de Goya. He was a desperate man who suffered in a chaotic world. Here’s an interesting fact about Freud. Interestingly, he used Goya’s mythological figures in Saturn Devouring His Son and Judith and Holofernes for his theories. The symbolic record of these latest works does nothing more than represent the darkest and most sinister drives of human beings.

In brief, Goya did nothing but connect with the darkness of the world in order to give shape to his nightmare-ish paintings. Thanks to his works, the darkest of human nature rose to the surface, and people were able to see those shadows that they don’t always like to acknowledge.

Psychoanalysis and Art: A Link to the Unconscious
When we talk about of psychoanalysis and art, we're referring to two disciplines that are apparently distinct, but, in the end, related. Read more »
Link copied!
Interesting Articles
Art and Psychology
The Magic of Poetry and How it Can Ease Pain

Art and Psychology
Ragnar Lodbrok - Reflections of a Legendary Hero