The Myth of Dionysus, God of Wine and Pleasure

The myth of Dionysis is different from most stories, lacking the extremely tragic aspects of other mythological characters. On the contrary, he’s a god that creates fun, vitality, and states of ecstasy brought on by both wine and passion. 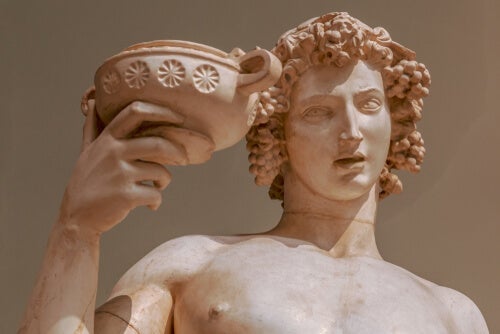 The myth of Dionysus – also known as Bacchus in Roman mythology – tells of a vital, joyful demigod who was always ready to party. He was considered the god of wine and pleasure, and fertility, and also the inspirer of ritual ecstasy.

There are two basic versions of the origins of this myth. The first version of the origin of Dionysus is that he’s the child of Zeus, god of the gods, and of Persephone, queen of the Underworld.

Hera, Zeus’ jealous wife, set out to kill the child. To achieve this, she called on the Titans, who lured the boy toward them with toys. He followed and the Titans killed him, cutting him into pieces, cooking him, and swallowing him.

Zeus, who loved this son with all his might, took revenge and struck the Titans with a lightning bolt. He saw that Dionysus’ heart hadn’t been eaten, so he used it to revive him.

Legend has it that from the ashes of the Titans, mankind was born. Because the Titans had eaten him, all humans now carry within them both the pleasure-seeking nature of Dionysus and the aggression of the Titans.

Other versions of the myth of Dionysus

The second version of the myth of Dionysus, and perhaps the most popular, begins with a beautiful princess named Semele.

Zeus fell in love with her at first sight and took human form in order to visit her. He soon conquered her heart and then seduced her. She got pregnant, which is why Zeus decided to confess who he really was.

In this version as well, Hera’s jealousy makes an appearance. When she found out about her husband’s infidelity, she also decided to adopt human form and introduced herself to Semele as a wet nurse.

She tricked Semele into confessing who the real father of the boy was. Hera then suggested that perhaps Zeus wasn’t who he claimed to be, planting doubt and worry in Semele’s mind.

To make sure, Semele asked Zeus to present himself to her as a god instead of a mortal. The god of Mount Olympus had promised her that he’d always do her bidding, so he couldn’t refuse her.

Thus, he turned himself into lightning and thunder. Unfortunately, the princess turned to ash and died since mortals can’t survive to witness a god’s powers. Dionysus, who was in her womb at the time, was saved when Zeus sewed him into his leg.

The myth of Dionysus tells us that Zeus entrusted his son to the care of Ino, who was the dead princess’ sister, and to her husband. However, Hera, who was still jealous, did everything she could to drive the adoptive parents crazy. Consequently, Zeus decided to turn Dionysus into a little goat and trusted him to Hermes, who gave him to the nymphs to be raised.

The nymphs and Silenus, a kind old man who was often drunk but who had the gift of prophecy, raised Dionysus. At the side of Silenus, the nymphs, the satirists, and the maenads, Dionysus became a man.

Dionysus was a beautiful, joyful, and dynamic young man. He was the one who discovered the cultivation of vines and the fermenting of grapes to make wine. He later traveled far and wide teaching the secrets of the art of wine.

During his trips, Dionysus had great adventures. The most well-known happened when he was on the coast: pirates kidnapped him, thinking that he was a prince and wanted to ask for a ransom. They couldn’t have imagined what would happen to them.

Dionysus and the cult of fun

When the pirates tried to tie Dionysus up, not one of their ropes would stay knotted. The god then turned into a lion and imitated the sound of many flutes, which drove his captors crazy. Panicked, they threw themselves into the sea and Dionysus later turned them into dolphins. According to this legend, these animals are actually repentant pirates, which is why they help shipwreck survivors.

Dionysus married Ariadna when he took pity on her after she was abandoned by a minotaur on an island. Later, when he finished his job teaching men how to make wine, he asked to go to Mount Olympus. Dionysus appears in an infinite number of stories and was an appreciated god among the Greeks.

His wish to visit Mount Olympus was granted, but before going to reunite with the other gods, Dionysus went down into the underworld to get his mother, Semele, who then became a constellation. Dionysus is associated with parties, fun, states of ecstasy, theater, and pleasure.