The Legend of Sakura: A True Love Story 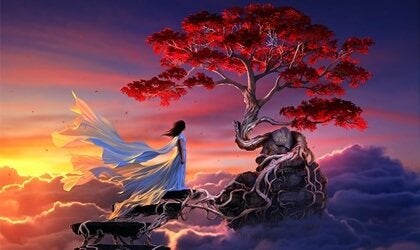 The legend of Sakura takes place hundreds of years ago in ancient Japan. At that time, the feudal lords fought terrible battles where many humble fighters died, immersing the whole country in sadness and desolation. There were few moments of peace. A new war would start right after another one ended.

In spite of all this, there was a beautiful forest that even war couldn’t touch. It was full of leafy trees that exhaled delicate perfumes and consoled the tormented inhabitants of ancient Japan. No matter how many wars there were, none of the armies dared to stain that beautiful forest.

However, there was a tree that never blosommed in that forest. Although it was full of life, its branches never had any flowers at all. For that reason, it looked lanky and dry, as if it were dead. It wasn’t, though. It just seemed like it wasn’t destined to blossom.

A hint of magic

The tree was very lonely. The animals that were there wouldn’t go near it for fear of catching its strange evil. Grass wouldn’t grow around it either for the same reason. Its only company was loneliness. The legend of Sakura tells that a fairy was moved when she saw how old the tree looked, despite the fact that it was young.

One night, the fairy appeared next to the tree and, with kind words, let it know she wanted to see it look beautiful and radiant. She was willing to help it. Thus, she’d use her powers to cast a spell that would last 20 years. During that time, the tree would be able to feel what human hearts feel. Maybe that way it would be happy and feel ready to blossom once again.

The fairy told the tree that, thanks to the spell, it could turn into both a plant and a human being whenever it wanted. However, if it wasn’t able to recover its vitality and brightness after those 20 years, it would die immediately.

Just as the fairy said, the tree saw that it could turn into a human being and a plant whenever it wished. It tried staying as a human being for a long time to see if human emotions helped it blossom. However, it was totally disappointed at first. As much as it looked around, all it saw was war and hatred. After this, it went back to being a plant.

The legend of Sakura tells that a lot of years passed and nothing changed. No matter what it did, the tree couldn’t seem to find a way out of that miserable state. However, one afternoon it decided to become human. Then, it walked to a crystal clear stream where it saw a beautiful young lady. Her name was Sakura. The tree was very impressed with her beauty so it decided to approach her.

Sakura was very kind to it. To reciprocate her kindness, it helped her carry some water to her house, which was just around the corner. They had a lively conversation where they spoke with sadness about the wars that were going on in Japan and the many dreams they had.

The legend of Sakura: Love is miraculous

When the girl asked for its name, the tree said Yohiro. They became very close friends. They’d meet to talk, sing, and read poems and amazing stories on a regular basis. The more the tree got to know Sakura, the more it wanted to be by her side. Every day it would count the minutes just to be with her again.

The legend of Sakura tells that Yohiro couldn’t bear it anymore and decided to confess its love to Sakura. In addition, it told her what it really was: a tormented tree that was soon going to die because it couldn’t blossom. Sakura was shocked and didn’t say anything for a while.

More time passed and the 20 years were about to be up. Yohiro, who went back to being a tree, kept feeling sadder as each day passed.

One afternoon, when it least expected it, Sakura showed up beside it. She hugged the tree and told it that she felt the same way. She didn’t want it to die. At that moment, the fairy appeared and proceeded to ask Sakura if she wanted Yohiro to remain human or if she wanted to merge with Yohiro in tree form.

Sakura looked around and remembered the war. Then, she chose to merge with Yohiro. And the miracle was done. The two became one and the tree finally blossomed. Their love perfumes Japanese fields ever since. The legend of Sakura shows us that another person can bring out the best in us.

The Extraordinary Story of Soichiro Honda
You probably don't recognize the name Soichiro Honda, unless we put it alongside "Honda", the car maker. The company's founder had an amazing life story. Read more »
Link copied!
Interesting Articles
Culture
Hildegard of Bingen: Biography of a Female Polymath

What would happen if one day you couldn't tell an umbrella from a cane? Or what if you could no…

Culture
7 Photos That Capture a Piece of History

History has given us some priceless pictures - portrayals of the best and the worst things that humankind has achieved. Photographs…

Culture
An Alkaline Body Is a Healthy Body

An alkaline body is a healthy body. That's what several studies have shown, including one recently conducted by the Bioenergy…