The Importance of Cognition for Psychopathology

Cognitive processes play a fundamental role in many psychological disorders. In fact, processes such as attention, memory, or reasoning can work differently in the context of a psychological affliction. 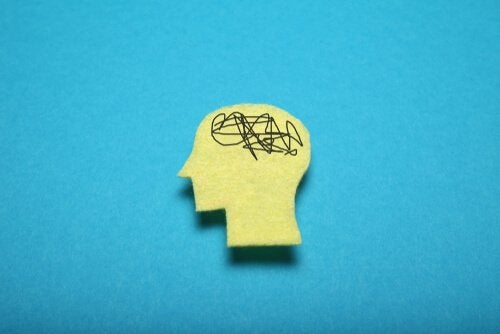 The importance of cognition for psychopathology is marked. The presence and evolution of different cognitive factors is the variable that determines whether or not certain psychological problems are present or not.

We’re talking about anxiety, sadness, blame (emotions), or maladaptive behavior. Some people might recognize an anxiety attack, a self-harming depressive crisis, or the rituals that a person suffering from obsessive-compulsive disorder (OCD) might carry out.

For example, the fact that people with OCD, generalized anxiety disorder (GAD), or post-traumatic stress disorder (PTSD) have maladjusted expectations doesn’t mean that they’ve always had them or that they’ll have them forever.

The psychological processes that can be affected by different psychological disorders are memory, reasoning, thought, attention, perception, and emotional regulation.

We’ll talk about some of them with examples referencing a wide variety of disorders. The goal is to understand the importance of cognitive factors in psychopathology.

This pattern has to do with hypervigilance. People with psychological conditions tend to pay more attention to stimuli that support their fears and worries.

An individual with social phobia, for example, tends to pay more attention to negative information and personal functioning. Not only are they hypervigilant of signals that could indicate they aren’t well-received by those around them but also of the sensations in their body (change in heart rate and breathing, etc.) This is self-attention.

In the cognitive process of memory, the phenomena that occur depend on the disorder in question. Some of those are:

Everyone has biases in their reasoning. However, you can understand the importance of cognition in psychopathology through these much more extreme biases. There are different reasoning biases associated with different disorders. For example:

Ruminations, intrusions, and preoccupations are elements that tend to become heightened or intensified when associated with a psychological disorder. Consequently, you can see the importance of cognition in psychopathology with disorders such as OCD, where the intrusions and recurring thoughts are heightened. Not only that but, in addition to appearing more often, they’re more intense or powerful.

For people with depression, the thought is “I’m worthless”. People with anxiety think: “They’ll stop loving me”. For people with OCD, on the other hand, it’s “I’m going to contaminate myself”. In general, people with a psychological condition overestimate the importance of these thoughts. So much so, that they eventually become their reality.

Thought suppression, for example, becomes especially problematic for people with OCD. If you try to use your will to “not think” about certain things, distract yourself, or eliminate thoughts, the opposite usually occurs.

Therefore, knowing the importance of cognition in psychopathology helps understand why it’s so complicated to change these things if you don’t work on them. When a mental health professional is going to design a treatment plan for a patient with OCD, they have to understand that:

As a result, if an individual with depression has a negative attributional style, it’d be very complicated for them to break away from their systematic rule when faced with a routine that has both negative and positive events. That’s why intervention by a specialist is so important.

Arie Kruglanski: Cognition, Motivation, and Radicalization
Arie Kruglanski is a professor at the University of Maryland who has contributed to the development of different important theories. Read more »
Link copied!
Interesting Articles
Psychology
When Guilt Becomes a Burden

Psychology
7 Signs that Your Relationship is Struggling

Romantic relationships go through different phases. We would all love it if we could stay in the butterflies stage of the…

Article 25.2 of the Spanish Constitution touches on prisoner rehabilitation and that the penalties imposed for committing a crime must…

Psychology
Why Is There so Much Violence in Soccer?

Why is there so much violence in soccer, specifically among fans? We see many news stories about violent clashes between rival…