The crises that couples in long-term relationships experience are usually due to big life changes. They allow both partners to reevaluate the relationship and decide if it's best to fix things or end them. 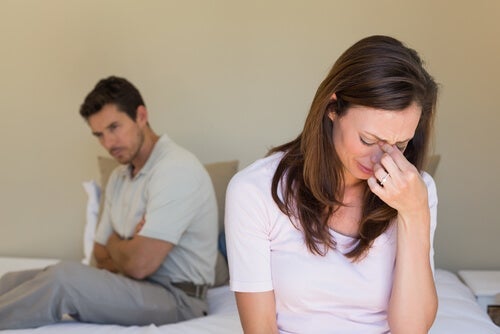 All long-term relationships go through hard times because people are constantly changing and evolving. These crises can motivate a couple to make plans for the future and invest in the present. They can also lead to anxiety and insecurity, especially if both partners tend to question their decisions.

Crises in long-term relationships are normal. While they cause a certain degree of instability and insecurity, they’re also an opportunity to make important changes and strengthen the relationship. Loose ends and unresolved conflicts often come up during these stages. Whether these become opportunities to resolve issues or just an excuse to push each other away is up to you and your partner.

Long-term relationship crises usually happen during the end or beginning of big life changes. It’s common for experts to classify these crises according to how long the couple has been together. Thus, the big four crises are the one-year, the three-year, the ten-year, and the empty nest crisis. Let’s take a closer look.

1. The one-year crisis – the end of limerence

Dr. Dorothy Tennov coined the term “limerence” in her book Love and Limerence: The Experience of Being in Love, published in 1977. She defined it as that romantic and obsessive stage of love when you’re strongly attracted to the other person and you have an intense desire for those feelings to be reciprocated.

The end of limerence is usually the beginning of the first long-term relationship crisis. This tends to happen after a couple has been together for a year or year and a half. The specifics of the crisis will depend on the couple, of course, but the common thread is that idealization stops occurring.

Both of you start to see each other’s flaws and you also try to get back some of the personal space you gave up at the beginning. Unless there’s a solid connection holding it together, a lot of relationships end here.

Another crisis occurs about three years after the beginning of a long-term relationship (remember that the amount of time is just an estimate.) During this stage, there’s usually a desire to take the relationship to the next level. If you don’t already live with your partner, that “next level” is moving in together. If you do live together, maybe you’ll think about getting married or having children.

The underlying cause is the need for greater commitment. A way of formalizing the existing bond. Couples at this stage in their relationship take stock of what they have and where they’d like to be. The end result of this crisis is either a show of commitment or a breakup. The latter occurs when one or both partners decide they aren’t ready for more commitment.

3. The 10-year crisis in long-term relationships

Sex, on the other hand, gets pushed to the back burner. This causes doubt and discomfort because you both want to feel attractive and would like sex to be more important. These two factors can lead to a breakup or a time of renewal and re-discovery.

Couples who’ve survived crises and managed to establish a healthy, balanced relationship often deal with one last crisis, called the empty nest crisis. It occurs when your children grow up and move out. At that point, you and your partner can focus on your relationship again, a transition that’s often fraught with conflict.

Over the years, you’ve both changed so much. You’ve adapted to your roles within the family but, as individuals, you might feel awkward with each other when you no longer have the filter of your children’s presence. At that point, you have to either reinvent the relationship or decide you have nothing in common and want to try living apart.

As we mentioned above, all of these moments are opportunities to re-evaluate your relationship. Both partners should carefully consider whether it’s best to break up or stay together. If you take your time and resist your impulses, you’ll likely be able to make a smart choice together.

Romantic Relationships
Telltale Signs that Your Lover Truly Cares About You

What are the telltale signs that your lover truly cares about you? Many people will tell you that "you'll know…

The Romeo and Juliet effect is when parents oppose a relationship, the partners intensify the romantic feelings for each other.…