The Fable of the Stones: How to Stop Worrying 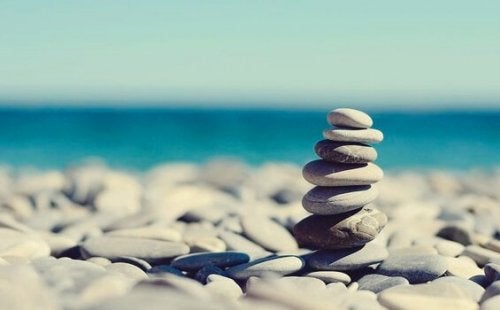 A teacher wanted to teach his students a lesson. Many of his adult students didn’t have time to study because they worked and also went to school. They were having a lot of trouble. They didn’t have enough money. Some of them were married with children and felt overwhelmed with responsibilities. So, the teacher decided to teach them the fable of the stones.

Some of the students didn’t want to listen. It seemed like a waste of time. They were more interested in getting through the course material than listening to a fable. After all, they were adults and they didn’t need anyone to tell them how to live.

But that didn’t stop the teacher. In fact, their resistance was just more motivation. What he did then was to take a glass jar and put it on the table. Then, he took a bunch of large stones and put them close to the bottle. He asked the students if they thought the that the jar could be filled up by the rocks on the table.

“The traveler who crosses a mountain in the direction of a star runs the risk of forgetting which is his guiding star if he concentrates too exclusively on the climbing problems. If he only acts for action’s sake, he will get nowhere.”

The Fable of the Stones experiment

The students started to make guesses. Each one took a guess at how many stones would fit in the jar and if it was enough to fill it up. In the end, almost all the students agreed that the stones were big enough to fill the cavity. Thus began the Fable of the Stones experiment.

The teacher started to put the stones in the jar, one by one. When he finished, they went all the way to the mouth of the jar. Then he asked his students: “Is the jar full?” Almost everyone responded that it was.

Then the teacher took a bag of smaller rocks from below his desk. He asked the students if it were possible for these smaller stones to fit in the jar. The students thought for a bit and decided that they could.

The teacher poured the small stones in, little by little, until the bag was empty. Then he asked the students: “Is the jar full?” The students looked carefully. After checking to see if there was room for any more stones, they declared that the jar was full.

In spite of the fact that all the students thought it was impossible to put anything else in the jar, the teacher surprised them again. This time, he took out a bag full of sand. In silence, he started to pour the sand into the jar. To everyone’s surprise, the sand found a way in into the cracks and crevices of the stones. The students hadn’t realized that between the stones there were little spaces.

For a fourth time, the teacher asked: “Is the jar full?” This time the students were sure. They responded that it was definitely full. It was impossible to fit anything else in the jar because the few spaces that were left were occupied by sand.

The teacher grabbed a pitcher of water and started to pour it into the jar. The contents didn’t spill, in spite of the fact that it was full of big and small stones and sand. There was room for the water, even though it seemed like it was full. The sand got wet and fit a good amount of water. When he finished, the teacher asked, “What have you learned from this?”

The moral of the Fable of the Stones

One of the students quickly responded, “What the fable teaches us is that it doesn’t matter how much you have in your schedule. There is always room for more. It’s just a matter of organizing it.”

The teacher stayed silent. Another student also wanted to participate. He said that learning is infinite. You can always fit more things in your head, just like the jar. You’ll always be able to add something else.

When the teacher saw that the students hadn’t understood the Fable of the Stones, he decided to speak. This time he asked them, “What would have happened if I had done everything backward? What if I started with the water, then the sand, and so on until I got to the big stones?” The students responded that the jar would have overflowed quickly.

“Now you understand,” the teacher told them. “The water, the sand, the small stones, and the large stones are problems. Some are big, some are small, and others are barely there. If we deal with the big problems first, there will be room for the little problems. But if we do it the other way around, we won’t solve a thing.”

We all know expressions and postures reveal a lot about someone's personality, attitude, or state of mind. Without realizing it, every…