The Dragonfly Metaphor and Life Cycles

The dragonfly can transmit a series of metaphors and symbolisms about our existence. We also have the capacity to transform ourselves and the magical ability to adapt to different scenarios. 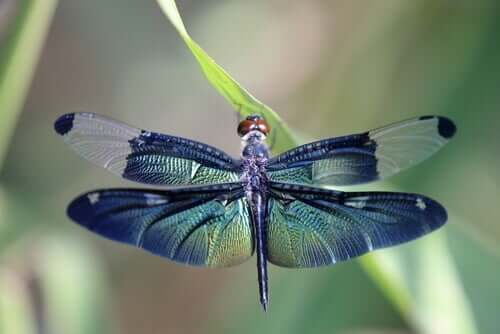 The dragonfly metaphor is a very interesting symbolic resource to help us understand life cycles.

Wolves, cats, butterflies, elephants… animals often inspire us with their particular attributes and we can learn many lessons from their lives.

The dragonfly is, undoubtedly, one of them. Traditionally, it’s an insect that represents two basic processes: adaptability and transformation. This insect has always attracted the attention of human beings due to the way it belongs to three of the spheres of our planet: earth, water, and air. Its transformation processes, from nymph to dragonfly, make it interact with these essential settings of nature itself.

It’s an insect of great beauty and fragility that has existed for a very long time. In fact, we know that dragonflies existed as far back as the Carboniferous period (more than 300 million years ago, according to experts). However, they were somewhat different back then, as they had a large wingspan and their wings reached 35 inches.

This gigantic size was significantly reduced to the form in which we know them today. They’re ethereal and almost magical creatures that dwell around water. We can certainly learn many lessons from them!

“Dragonflies are reminders that we’re light and we can reflect light in powerful ways if we choose to do so.”

Dragonflies are one of the most fascinating insects in the invertebrate kingdom. They’re incredibly fast and can fly up to 50 mph. Their eyes are one of the most attractive features. They have about 30,000 hexagonal facets, and each has its own lens and retina. All of this has one purpose: to provide them with one of the most perfect views of nature, one that allows them to have a 360º view of their surroundings at all times with just one glance.

However, beyond its anatomy, striking colors, and extraordinary way of flying, its symbolism also stands out. The dragonfly metaphor is rooted in many different cultures that have observed many similarities between the dragonfly’s life cycle and our own.

A life of transformation

The dragonfly has a very particular life cycle. It goes through three very specific phases in its metamorphosis, which range from hatching and the nymph phase to eventually becoming a spectacular dragonfly. The whole journey lasts between three and six years. Amazingly enough, the last stage is the shortest.

Dragonflies only live in their mature form for a few weeks. Much of their existence is spent as a water creature, a nymph that breathes through gills and feeds on worms and tadpoles. Later, it begins to transform, and that journey of change forces it to undergo some 15 skin changes until its wings emerge.

Both dragonflies and human beings adapt to life, as almost nothing is static. They understand that, to survive in any environment, they have to change, shed their skin, and let go of their old forms. Only then can we succeed in becoming what we’ve always dreamed of.

Living each day to the fullest

The dragonfly metaphor teaches us a valuable lesson: the need to make the most of our lives. When the nymph sheds its last skin layer and its wings emerge, it’s aware that its existence will be ephemeral. Thus, it knows that it’s time to embrace the wind, travel, and explore.

Just like dragonflies, you can also learn to appreciate life with the same passion and delicacy.

Another fascinating aspect of this insect is its wings. In addition to their beautiful colors, they have incredible finely-tuned flight maneuvers. Dragonflies are powerful and elegant in the air, despite having spent much of their lives in water.

Japan is one of the countries that most venerate this insect because, for them, it perfectly symbolizes balance in life.

The final journey to the afterlife

For Native Americans, the dragonfly metaphor represents a guiding spirit. For them, this invertebrate recalls the final journey of every human being as, after a long life, we leave the world of land and water to become a creature of the air. Winged beings that finally ascend to another sphere where we become spirits and free souls.