The Deutsch and Krauss Experiment: Cooperation and Competition

Negotiating is often a very difficult art. In this article, we'll look at the Deutsch and Krauss experiment. 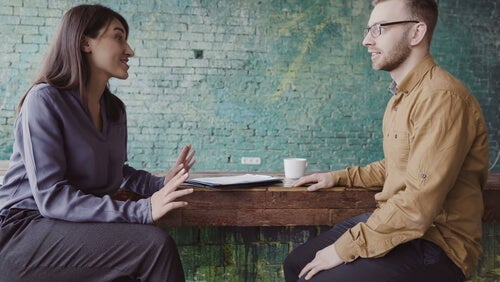 Negotiation is an art that we all practice from time to time. It doesn’t only have to do with commercial matters, but also with the way in which we juggle all our obligations and duties. The Deutsch and Krauss experiment focuses primarily on negotiations and the patterns that determine them.

Researchers Moran Deutsch and Robert Krauss set out to find out why negotiations humans undertake often fail. Thanks to the Deutsch and Krauss experiment, it was established that two factors determine success or failure in interpersonal negotiation: communication and threat.

They also affirmed that there are two ways of negotiating: cooperative and competitive.

In the first one, both parties will achieve some benefit, but they’ll also have to yield in some areas.

In the second, the stakes are raised in such a way that there are absolute winners and absolute losers. Let’s see how the Deutsch and Krauss experiment reached those conclusions.

“Unity is variety, and variety in unity is the supreme law of the universe.”

The first Deutsch and Krauss experiment

The first Deutsch and Krauss experiment established a game for two people. Both are owners of a truck company. The goal is to make as many trips as possible between point A and point B. There are two roads: a short one and a long one. However, the short road goes only in one direction and can only be traveled on by one truck at a time.

At the end of the short road, there’s a door. It remains closed until the truck has already started off on its way back. The two people who take part in the game have no way of communicating with each other. They must interpret each other’s actions based on how each one is playing.

In the first series of experiments, the researchers found that the participants played the game by blocking their rival’s options. They used the door as a means of forcing their opponent to use the long route and gain an advantage. By playing this way, both players obtained only small profits.

The second and third Deutsch and Krauss experiments

In the second part of the Deutsch and Krauss experiment, the rules remained basically the same, but headphones were introduced. This allowed both players to communicate with each other to make the game more fluid. However, even though they were able to communicate, they didn’t. Consequently, the results were generally the same as in the first experiment.

For the third experiment, Deutsch and Krauss introduced a new element. Now the players would have to talk to each other in order to continue with the activity. It didn’t matter what they said, the important thing is that they had to keep on communicating.

The result of the third experiment was varied. In some cases, the forced communication enabled them to make some minimal agreements, and this helped them both to increase their profits. In other cases, it had no effect, and the profits were minimal, just as in the first two experiments.

Conclusions of the experiment

The Deutsch and Krauss experiment showed that there were two negotiation styles. The first, as we said above, is the cooperative style. The main characteristics are a higher level of communication, along with kindness and goodwill. They sought to coordinate efforts, and considered the conflicting interests as a problem to solve and not as a threat.

The second style is the competitive style. In this method, the communication they have seeks to obstruct the other person. The communication is simply used as a weapon to confuse or deceive the opponent. This, in the end, eliminates any form of trust and is, therefore, an obstacle to reaching agreements.

When competitiveness comes into play, the participants usually have to work twice as much. They don’t divide the work or benefit from the other person’s abilities, as they would do in the cooperative model. The disagreements and attempts to neutralize the opponent also limit their profits.

Taking into account all the findings, the Deutsch and Krauss experiment shows that, in general, people tend to take on a competitive negotiating style. The most important thing for them is to defeat the other person; it even becomes more important than their own profits.

As a result, any victory will be a very limited one. When there’s cooperation, part of the profits are waived, but less effort is required and a partial victory is guaranteed.

People need to work to survive. But when the work environment is toxic, it becomes a huge negative influence on…

The work environment is more competitive every day. In addition, it's become hard to select the right candidate for each…