The Decisive Question for Man According to Carl Jung

Carl Jung believed that the most important question for our lives has to do with transcendence, or the significance of individual existence. Without a satisfying response to that question, an emptiness ends up defining your life. 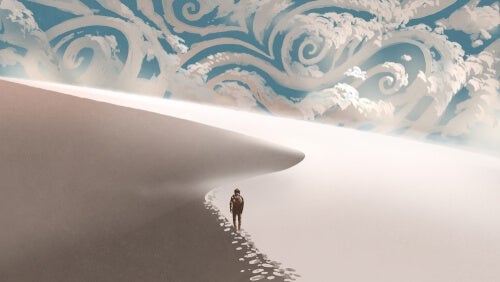 In the 20th century, the concern about the meaning of life transcended borders of art, literature, and intellectual circles. The gradual decline of absolute values, disillusionment about human cruelty, and the lack of stable references fed the need to find answers. Swiss psychiatrist Carl Jung understood the widespread feeling of uncertainty and proposed his own hypothesis. He set out to identify that decisive question for man, the answer to which could give meaning to human existence.

For Jung, the decisive factor was our sense of transcendence. In other words, he believed that each person needs to feel that their life has a meaning that goes beyond the immediate reality. Humans have to believe that what we do has an echo, makes some kind of impact on reality. He also argued that if you think of life as no more than a set of moments with no overarching direction, just small, irrelevant goals, you’ll suffer existential angst. You’ll feel like everything is meaningless.

Before the modern age, religion gave people a sense of transcendence in their lives. People’s existence didn’t end with their death. Instead, it continued on in a spiritual life, where the gods or the saints evaluated and rewarded or punished everything that you did during your life on earth. But as people slowly started to reject the dogma and doctrine of religion, they lost the tools with which to face their harsh reality. That existential crisis was starting to unfold during Jung’s time, which is why he dedicated himself to shaping that question.

“The more a man lays stress on false possessions, and the less sensitivity he has for what is essential, the less satisfying is his life.”

The decisive question for man

According to Carl Jung, the decisive question for man is this: is the existence of a particular person related to something infinite? Without even realizing it, most people are looking for that connection with the infinite. You aren’t always aware of it, but you engage in that search through mediums such as religion, work, your convictions, etc.

The infinite is a set of unknown ends or frontiers. Human life ends with death. But everyone knows that, beyond your individual death, some realities transcend you. They were there before you were born, and will be there long after you disappear from this Earth.

Religion has been one of the most natural ways to establish a connection with the infinite. Believing in God responds to that decisive question. For non-believers or for those for whom God doesn’t have an important presence in their lives, things get more complicated. They search for the infinite through their own descendants. Children, in a way, prolong your life. It’s also possible to try to make that connection through your work or your social life.

The importance of finding meaning

From the dawn of time, people have been searching for that connection with the infinite. Whether out of fear, the impossibility of accepting the idea of death, or as a way to consolidate a kind of authority which all human beings should obey. From very early on, love also become a cornerstone that answered that decisive question for man. Love, many believe, gives meaning to our lives and transcends the mundane.

Nevertheless, human beings discovered that their objects of love were also limited. They expire. As long as the one you love also has an end, your feeling of transcendence is also destined to die as a consequence of irreparable loss. That’s why humans created Gods everywhere and decided to love them. The gods didn’t die, fate couldn’t deprive people of their company. Therefore, people found a way to connect with the infinite.

Later, with the development of art and science, the concept of God moved to the back burner for many people. Science and the arts themselves became the new “infinite” that gave transcendence and meaning to people’s lives. Art and science answered the decisive question for man.

The importance of the decisive question and a sense of transcendence is that they provide a kind of happiness that you can’t achieve by any other means. This was aptly and clearly expressed by Portuguese philosopher Baruch Spinoza, who said, “All happiness or unhappiness solely depends upon the quality of the object to which we are attached by love. When a thing is not loved, no quarrels will arise concerning it — no sadness be felt if it perishes — no envy if it is possessed by another — no fear, no hatred, in short, no disturbances of the mind. All these arise from the love of what is perishable, such as the objects already mentioned. But love towards a thing eternal and infinite feeds the mind wholly with joy.”

The Symbolism of Dreams According to Jung
The symbolism of dreams in the Jungian analysis is much richer and interesting. Carl Jung stepped far away from idea that they're about unfulfilled desires. Read more »
Link copied!
Interesting Articles
Philosophy and Psychology
Some of Goethe's Most Powerful Quotes