The Cracked Jar, a Hindu Story about Learning How to See Ourselves 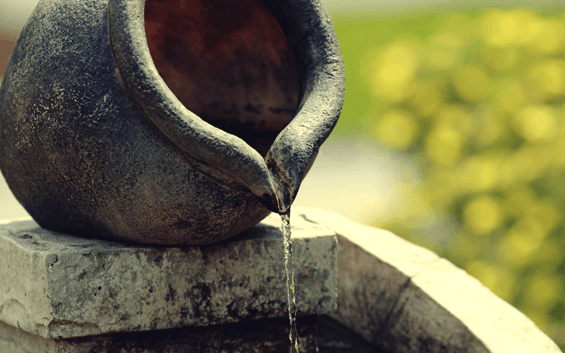 This is the story of a man who lived by selling water in the market. He had about ten jars. Very early every morning he put a pole on his shoulders. He hung a jar on each end, carried it to the well, and then to the center of town. However, among those jars, one was cracked.

Interestingly, this hardworking man always took the cracked jar to make the first trip of the day. He carried it, along with a jar that was in perfect condition, to the well where the water was. He collected the liquid patiently and then carried it for over a mile.

“I call useful anything that gives us happiness”.

When he got to the market, the cracked jar had of course already lost much of the water it had contained. Thus, the man could only charge half of what we could with the other jars. The good jar was overflowing and allowed him to charge the full amount.

Soon the other jars began to discuss the situation with each other. They could not understand why the man still kept the cracked jar, because it lost him money every day. Nor did they understand why he also used it first on his daily route.

The cracked jar started feeling ashamed. It had accompanied the man for the past ten years and had a great appreciation for him. It felt bad when it realized that it was only a hindrance, and couldn’t understand why the man hadn’t thrown it away.

It remembered the times when it was also a wonderful jar, and very useful to its owner. There was a time when it did not have a single defect. It was one of the best for that daily journey. However, one day the man had stumbled. That was when it got broken and became partially useless. It had been a long time ago, and yet the man didn’t get rid of it.

The road to the well

The man used to do something that piqued the interest of all the jars, including the cracked jar. At certain times, during his daily journey to the well with his empty jars, the man put his hand in his pocket and watered something along the way. None of them knew what it was.

Suddenly the man stopped carrying that thing in his pocket and threw it on the side of the road. Later, he would do the same thing again, but on the opposite side of the road. All the jars were intrigued, but since it was something that he didn’t do all the time, they soon forgot about it and their curiosity passed.

Conversations between the new jars tormented the cracked jar. It regretted being so unhelpful and harming the one who had bought it and cared for it for so long. So, without thinking about it any further, it decided to ask the man to throw it away.

One night, when the man was ready to go to sleep, the cracked jar called him and told him that it needed to talk to him. The man was willing to listen, and very attentive to what it wanted to say.

Without further ado, it told him what it thought. It knew he appreciated it, but it was not used to being useless. It didn’t want him to keep it simply out of compassion. He should just throw it away in the trash and end it once and for all.

The man smiled when he heard the cracked jar speak. He told it that he had never thought about throwing it away because it really was very useful. “Useful?” It asked. How could it be useful, if it only made him lose money every day? The man asked it to keep calm. The next day he would show it why he valued it so much. The cracked jar could hardly sleep.

The next day, the man said, “Please look at everything around the road towards the well”. The jar looked around it. It looked to both sides and could only see a beautiful path full of flowers about to bloom. When they reached the well, it told the man that it had not seen anything that answered its question.

The man looked at it with affection and said, “Ever since you cracked, I thought about the best way for you to still have a use. So I decided to scatter seeds from time to time along the way. Thanks to you, I have been able to water them every day.”

“And thanks to you, when everything blooms, I can take some flowers and sell them in the market for a higher price than the water. ” The cracked jar then understood what its beautiful purpose was.

Strategic Thinking: How To Give Your Life Purpose
What is strategic thinking? And how does it differ from strategic planning? Read on and find how how this way of thinking can change your present and your future. Read more »
Link copied!
Interesting Articles
Biographies
Marvin Harris: The Creator of Cultural Materialism

Culture
Reason and Emotion: A Balance That Yields Good Decisions

Some people believe that the best decisions come from a place of reason. However, making decisions after we've set our…

According to biorhythm theory, people have three types of biological cycles: One of them is the physical cycle, which lasts 23 days. The second one is the emotional cycle, which…