The Boy in the Striped Pajamas: Friendship Beyond Bars 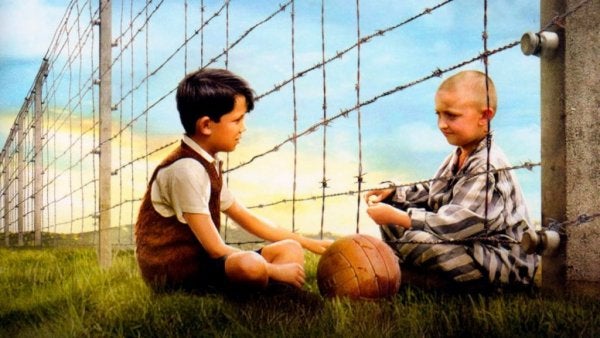 The Boy in the Striped Pajamas is a book by John Boyne published in 2006. It was brought to the big screen later on by Mark Herman.

The movie and book are very different, but that’s not relevant to this article, so we won’t go into it.

Instead we’re going to focus on the main values and reflections in the work. That’s why the movie and the book will both work equally as a reference point.

The Boy in the Striped Pajamas takes places in one of the cruelest and most shameful moments of human history. It’s set during the Holocaust. It’s a period we must not forget because, as they say, history helps us learn and not make the same mistakes.

We’re in Nazi Germany, in a military family’s house. They have very deep-rooted values and ideology, or at least it seems that way among the members of the family.

The head of the family is a high-up military official in Hitler’s service. Thanks to his “great efforts,” he will go to Auschwitz to continue his work there.

The whole family moves to what will be their new home. It’s a completely isolated house, very close to the concentration camp. Here, we’ll get to know the characters better.

On the other hand, there’s Gretel, his older sister. At the beginning, we see her surrounded by dolls. But soon she’ll replace the dolls with Nazi propaganda “decorations.”

And then there’s Shmuel, a boy the same age as Bruno. But, because he’s Jewish, he lives in the concentration camp.

But, we see how this state of ignorance changes over the course of the movie. She’ll no longer be ignorant, and her feelings towards her husband will also change. She’ll be disgusted by the role he plays at his job.

Two Contrasting Realities in The Boy in the Striped Pajamas

In the book version, we see how Shmuel and Bruno were born on the exact same day. And yet their lives are completely different.

Bruno lives in a comfortable family. His father is a soldier and his biggest worry is not having someone to play with. He suffers from boredom, and because he’s very displeased with the new place he has to live. He doesn’t understand why he has to move and leave his old friends.

Shmuel is Jewish. Because of that, he’s been sentenced to live in a concentration camp. As a result, his worries are very different from Bruno’s. But even in his case, we can see the same desires and innocence of children.

These contrasting realities show us how our origins can mark and condemn us for life. No one chooses where to be born. No one is to blame for belonging to one crib or another.

The two boys don’t understand these differences and see each other as equals. They see a friend to play and share adventures with. They can’t understand why there’s a barrier separating them if they were born the same day, if they’re so similar deep down.

The barrier in this case is real, but we can also look at it as a symbol. Two boys born on the same day, two similar boys yet two very different realities.

Nowadays, we look at the Nazis with disgust. But when Bruno was born, he was lucky, or at least luckier than Shmuel. We could see that this barrier, these contrasting realities, still exists in our lives.

Not in the same way, but there’s still a difference between being born in place versus another. Between a comfortable family and one that has no resources.

Relationship to Nietzsche’s Idea of the Superman

Nazism adopted and reinvented the ideas of the philosopher Friedrich Nietzsche. This philosopher believed in a class of men with superior characteristics: strong, intelligent, creative, able to think and reason.

These men were the survivors, the ones who stood out of the pack. The Nazis identified with this superman.

But for Nietzsche there were many different stages to reach the status of Superman:

Think of this image of the child as the characters of Shmuel and Bruno. They both seem to be free of prejudices, or somewhat free. They’re the only ones who overcome the barrier all the adults crash into.

Once they get over the wall, they challenge established values. It doesn’t matter what people have taught them, their friendship goes further.

Bruno puts on striped pajamas, making himself equal to Shmuel. For the boys, their friendship is everything and there are no longer any differences.

Instead, they start making judgments about the other as they get to know each other. They themselves create their own values out of nothing… and from those values, they decide.

“We’re not supposed to be friends, you and me. We’re meant to be enemies. Did you know that?”

-Bruno, The Boy in the Striped Pajamas–

The Weight of Ideas

The Boy in the Striped Pajamas suggests the problems that a specific ideology and the ideas shaping it might lead to. In the story, and in the movie itself, we see how ideas can end up indirectly causing much more harm than any weapon.

This is especially true if we keep in mind their power to combine forces. Therefore the conviction of two people on a particular cause may lead them to commit any kind of action. It doesn’t matter how unjust and cruel it might seem.

For an idea to last, it has to be indoctrinated into the young. We see this in the classes Gretel and Bruno have to go to. Their teacher teaches them history following the Nazi ideology’s script.

In essence, he is transmitting the values he sees as correct to the children. And so the idea that they belong to a superior or privileged race will last through the generations.

The references to Nazi propaganda are also interesting. We see them in the posters Gretel decorates her room with. Or in the way they “sell” the supposed quality of life in concentration camps.

We can already guess at the ending by cues in the weather shown in the movie. It’s a literary concept known as locus terribilis. The images of rain warn us something is going to happen.

All this, of course, takes place in a historical setting. It’s one full of horror and human cruelty, but it makes us ask an important question. We ask ourselves if maybe, from the comfort of our homes, we haven’t changed much. We’re still unaware of other people’s suffering.

“Of course all this happened a long time ago and nothing like that could ever happen again. Not in this day and age.”

-John Boyne, The Boy in the Striped Pajamas-

Lessons from Zootopia: A Movie about Tolerance and Personal Growth
We can take away many lessons from Zootopia, even though it's a kids' movie. Read more »
Link copied!
Interesting Articles
Cinema, Television, and Psychology
The Message Glenn Close Sent Her Mother