The Attraction to Risk 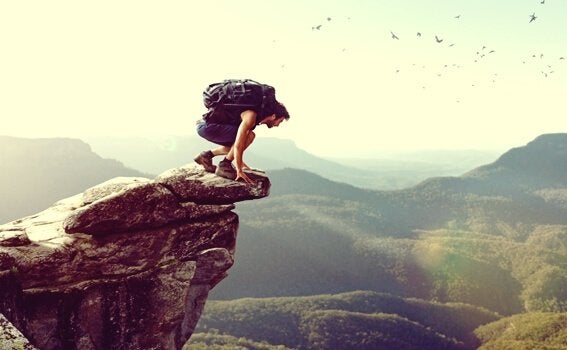 There are some people who have an attraction to risk. We’re talking about things that endanger their health, physical well-being, or even their finances, stability, etc…Most of us have an adventurous side, but we don’t usually pull that part of ourselves out for unimportant things or high risks.

An attraction to risk also includes things like having sex without proper protection. Then, of course, there are things like driving extremely fast, driving drunk, or not ignoring traffic signs. There are also things like going on trips or doing dangerous things without preparing or bringing the right equipment. Or, for example, compulsively going places where you can play games of chance and bet huge sums of money. The list goes on and on.

“Be brave. Take risks. Nothing can substitute experience.“

Undertaking any action that puts your safety or stability in question means taking a risk. Obviously there are ways to take calculated risks too, when it comes to achieving goals important to you. But in those cases, you usually take the necessary steps to minimize a potentially negative outcome.

The brain, and an attraction to risk

A group of scientists at Stanford University (USA), published some research about this in the journal, Nature. They talked about how there are specific neural circuits that regulate our risk-taking behavior. They studied how this worked in rats, but said the same mechanisms exist in birds, wasps, bees, and human beings.

The conclusions of their study were that an attraction to risk is regulated by a small group of neurons found in the nucleus accumbens. This is a part of the brain that plays a role in our reward system. This means that it’s also a part of the brain with neurons that deal with pleasure and addiction.

The scientists also found that an attraction to risk has a strong link to pleasure. The research seems to show that some people have higher dopamine levels when they take risks. What this means for those people is that engaging in this kind of behavior gives them a pleasurable feeling in mind and body.

A study by Karl Deisseroth

Karl Deisseroth is a professor of bio-engineering at the very same Stanford University. One of his biggest contributions to the field is that he helped create the study of optogenetics. It’s a revolutionary method that uses light to control our cells, and more specifically, our neurons. They use this method to stimulate a part of the brain and see what changes that causes. By doing this, they can determine which areas come into play with specific kinds of behavior.

Deisseroth did an experiment where he used optogenetics to stimulate the nucleus accumbens and control dopamine receptors. In other words, he cut off the relationship between risk-taking and dopamine production. He did this study with a group of rats.

The result was that the most risk-taking rats became immediately very reserved. When they stopped applying the control, those rats went back to their normal way of behaving. This lead him to theorize a deep link between an attraction to risk and dopamine production in the brain.

The two sides to risk

Attraction to risk plays an important role in our evolution, both as individuals and as a species. If we always behaved in a very sensible, reserved way, we’d probably never be able to grow or broaden our horizons. All of humanity owes its evolution to the primitive people who dared to experiment and make fire, because they were also terrified of it.

In the same way, everyone needs a little bit of risk in their life. It’s what we now call “getting out of your comfort zone.” Any time you confront the unknown, there will always be elements out of your control. But that’s the only way you can improve as a person. It’s also very emotionally gratifying to do these kinds of things in your life.

There are some cases where attraction to risk takes a more compulsive tone. In those cases, there’s no real goal other than to physically and mentally experience high-risk situations. This is very similar to an addiction of any other kind. In general, people like this have strong self-destructive tendencies, and they’re often struggling with hidden depression.

Why Do People Conform?
Have you ever looked back and realized that there was a time when you didn't conform? You dreamed of going far, you wanted your life to be memorable. Read more »
Link copied!
Interesting Articles
Culture
3 Mental Training Exercises That Will Make You Happier

Is it possible to be happier just by doing mental training exercises? The answer is yes! The last two decades of…

Do you consider yourself to be a highly creative person, and do you feel strange because of it? Don't worry,…