The 7 Best Quotes by Karl Popper 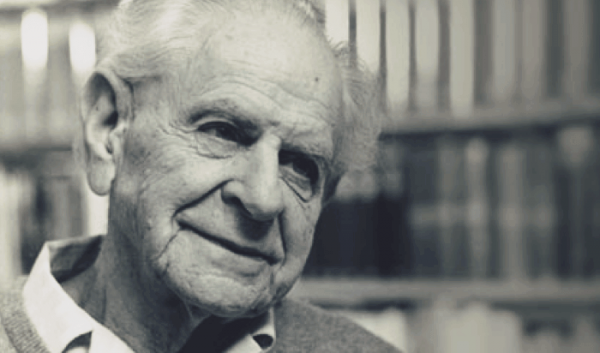 Karl Raimund Popper was born in Vienna, Austria, in 1902 and died in London in 1994. He witnessed virtually the entire 20th century, and was also one of its great critics. He was a philosopher by profession and a teacher by vocation. He was one of the most brilliant contemporary minds. His quotes are proof of that.

Popper has been called the father of critical rationalism. He dedicated his life to questioning modern reason. Some of his contemporaries gave him a nickname the champion of common sense. He honored that nickname.

“True ignorance is not the absence of knowledge, but the refusal to acquire it”.

He spoke out against the scientific method, Marxism, Semitism, metaphysics and everything that shaped the sphere of thought in the twentieth century. He was exalted in England far more than in his homeland, where he was distinguished with the title of knight. Here, we’ll give you some of Karl Popper’s best quotes so you can get to know his thoughts a little better.

Popper says: “Those who promise us paradise on earth never produced anything but a hell.” It is a sharp criticism against idealism, with its zeal for total perfection or total fulfillment.

In society, search for perfect realities has led to the most radical manifestations of fascism. In individual life, the desire for the ideal only leads to frustration. That’s why Popper may be right when he insinuates that paradise and hell are two sides of the same coin.

Sometimes we think about the world, reality and ourselves as if everything were static and unchanging. But even inanimate objects are always changing. That is why Karl Popper stated, “If God had wanted to put everything into the universe from the beginning, He would have created a universe without change, without organisms and evolution, and without man and man’s experience of change. But he seems to have thought that a live universe with events unexpected even by Himself would be more interesting than a dead one.”.

With this statement he reminds us that nothing is the same from one second to the next. That everything is constantly changing. Therefore, reality as such is ungraspable and we would only be able to capture moments or parts of it.

For this Viennese philosopher, the main quality of reason is its openness. Based on this premise, he does not hesitate to affirm: “When I speak of reason or rationalism, all I mean is the conviction that we can learn through criticism of our mistakes and errors, especially through criticism by others, and eventually also through self-criticism.”.

In that sentence emphasizes the uncertainty and mobility that accompanies reason. He speaks against having absolute ideas. Rather, he speaks to exploration and searching for reason behind our thoughts.

Faced with equality, an issue that was at the center of modern thought from the eighteenth century to the twentieth century, Popper notes the following: “...freedom is more important than equality; that the attempt to realize equality endangers freedom; and that, if freedom is lost, there will not even be equality among the unfree”.

This is one of Karl Popper’s quotes in which he highlights that freedom has a higher value. That equality is related to freedom, and freedom will always be the decisive factor.

Freedom and security always have a push and pull when we talk about power. We often debate the dichotomy between the two. The paradox is that full freedom puts stability at risk, while strict security reduces freedom. An example of the latter is when when a government places a “curfew” in face of any danger.

In this regard, Karl Popper says: “We must plan for freedom, and not only for security, if for no other reason than only freedom can make security more secure.” With this, he settles the debate in favor of freedom. He believes that real security only comes with real freedom.

The openness of society is directly linked to free thought and moral independence or autonomy. These are Popper’s words on that point: “…the open society is one in which men have learned to be to some extent critical of taboos, and to base decisions on the authority of their own intelligence.”

It is interesting to note that Popper does not absolutely reject taboos. that is why he says we should be critical “to some extent”. This philosopher was convinced that reason should not criticize anything outside of science. On the other hand, he emphasizes the idea that people must obey their own intelligence and not an external authority.

This wonderful reflection by Popper points out what makes science different from another type of knowledge: “But science is one of the very few human activities — perhaps the only one — in which errors are systematically criticized and fairly often, in time, corrected. This is why we can say that, in science, we often learn from our mistakes, and why we can speak clearly and sensibly about making progress there. ”

The approach is very interesting, Some religions and politics show themselves as error-free. Science is superior to them, precisely because it is critical, to a high degree, with itself.

Karl Popper had one of a thinker’s highest virtues: he was intellectually honest. He showed a genuine desire to come up with reasoning and ideas that would give him an accurate approach to reality. His influence was remarkable and left an lasting mark on the history of philosophy.

Hyperosmia: Definition and Causes
Wouldn't it be awful to have to smell sweat or manure even more intensely than normal? That's what happens to people with hyperosmia, although it can also be a good thing. Read more »
Link copied!
Interesting Articles
Culture
Tantra Is Transforming Ordinary Lovers into Twin Souls

Tantra is a centuries-old philosophy that comes from India. It understands our sexual energy as a powerful creative force. This…

Culture
3 Awkward Conversations Every Couple Should Have

Sooner or later, you need to do it. Either because an everyday, meaningless conversation leads you there or because it's…

Culture
The Myth of the Femme Fatale

The so-called "fatal woman" is a kind of "devourer of men." She is both fascinating and terrible all at once. Although there are tales of characters like this throughout the mythology of…

There are moments in life when music nurtures us even more than food does. The lyrics may hurt us, may hurt our soul, or fill us up. Listening to music can…