The 3 Psychological Stages of Unemployment

The psychological stages of unemployment consist of a series of phases that a person goes through when they lose their job or can't find a new one. Seeking support from loved ones and making sure to stay proactive can help prevent depression. 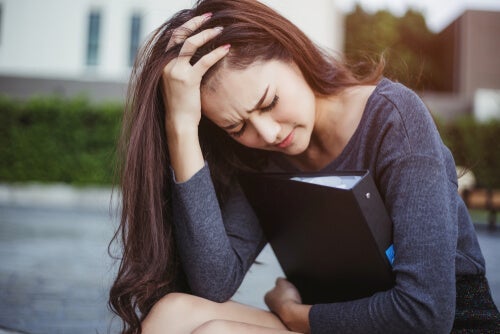 Lack of paid work is a situation that not only takes a toll on our finances, but also on our emotional and psychological state. This phenomenon has been the focus of a number of studies in recent years. Professor Susana Arancibia from the University of the Pacific, Chile, notes that there are three psychological stages of unemployment.

For most human beings, having a regular income is an essential part of life. Professor Arancibia also indicates that work helps individuals connect with society, giving them a role and purpose. As a result, unemployment can have a significant impact on a person’s well-being. This manifests itself differently depending on which psychological stage of unemployment the person has reached.

People without formal employment are often considered “idle” or “unproductive”. However, this isn’t usually the case at all. Most unemployed people dedicate their time to carrying out domestic tasks and work that largely goes unrecognized, but still requires a significant amount of effort. This is one of the reasons why unemployed people tend to go through these different psychological stages. Below, we’ll take a look at each of these stages in more detail.

“It’s shocking that in a country where 25% of the population is on the verge of poverty, and six million people are out of work, we pay a guy hundreds of millions of euros to kick a ball around.”

The psychological stages of unemployment – skepticism and enthusiasm

People who’ve recently found themselves unemployed first tend to experience a kind of shock, which may vary in intensity from person to person. If the person expected to be out of work, the impact is often less severe. If it happened suddenly, however, this shock is usually more profound. Despite everything, the person refuses to accept their new situation. They hope their old manager will change their minds or that “something” will happen and everything will go back to the way it was before.

This psychological stage of unemployment is also characterized by ambiguity. While the person wants to go back to work, they also find themselves starting to enjoy their time off, which can initially make things a little easier. They tell themselves that they’ll find a new job soon, and everything will go back to normal in no time.

The second psychological stage of unemployment occurs when the person starts to realize that finding a new job might not be as easy as they first thought. This phase usually occurs around 6 – 18 months after they lose their job. During this time, the person has gone to great lengths to try to find a new job and still has nothing to show for it.

They begin to feel pessimistic and may exhibit the first signs of anxiety. They start thinking there might be something wrong with them, and may experience bouts of insomnia, as well as periods of increased irritability or frustration. Feelings such as guilt and shame are also common. In some cases, they start to lose their self-esteem, as well as their self-confidence.

The psychological stages of unemployment – apathy and hopelessness

Around 18 to 24 months after losing their job, the person will reach the next psychological stage of unemployment. In this phase, they finally begin to resign themselves to their new situation. They may experience feelings such as sadness, inferiority, and apathy. For many people, it often feels as if there’s just no way out, or as if nothing they do will make any difference. They may also be overwhelmed by feelings of failure.

As time goes on, these feelings only intensify. After the 24 month mark, they may resign themselves to their situation completely, to the point where they may stop looking for a job altogether. The person will generally view any potential job opportunities with deep skepticism and may experience chronic frustration. Also, they start to feel less empowered than others and may even fall into depression. At this stage, their motivation is practically non-existent.

What can you do to help?

Partners, family members and friends play a vital role in the lives of those facing long-term unemployment. If they receive acceptance and support, they’ll feel better equipped to cope with this difficult period in their life. It’s also important for the person to realize that their value as a human being goes beyond their professional achievements.

Similarly, it’s important for those who are unemployed to make good use of their free time. One good option is to study. There are hundreds of online courses to choose from. many of which are completely free and of really great quality. This, in turn, can help broaden your professional skills, and increase your chances of finding a new job quickly.

If finding paid work at an established company proves difficult, you could always consider the possibility of becoming self-employed. Many business ideas don’t require a lot of money to set up, especially in the service industry.

Experts recommend that, while looking for a new job, those who are unemployed for a long period of time should try to come up with ideas for starting their own business. We often find that the job market isn’t always in the business of offering up fantastic new opportunities left, right, and center. On these occasions, you may have to create opportunities for yourself.

Mindfulness for the Unemployed
Mindfulness for the unemployed is an effective treatment to combat the ever-so-proper discouragement that accompanies unemployment. Read more »
Link copied!
Interesting Articles
Cinema, Television, and Psychology
The Last Laugh - Stereotypes about Aging

We have become accustomed to a mental action that prevents us from touching the tangible reality: constantly creating in our…