There seems to be a connection between reason and the heart and there may be great displeasure in what's known as broken heart syndrome or Takotsubo cardiomyopathy. 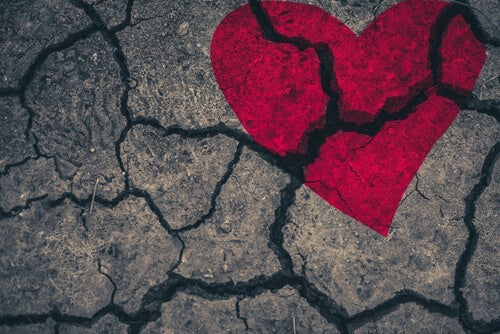 You’ve probably heard someone say that someone has broken their heart. Also, you may have felt identified with songs about a soul being broken and/or hearts torn to pieces. Well, it turns out this isn’t only a figure of speech and, indeed, there’s such a thing as a broken heart. This is also known as Takotsubo cardiomyopathy.

Broken heart syndrome, also known as Takotsubo cardiomyopathy, is a heart disease that occurs when a person suffers from emotional and physical stress. It can manifest in otherwise healthy people.

It happens because the heart stops pumping blood into an area of this organ and, as a consequence, it becomes somewhat paralyzed. Therefore, it produces a cardiac disorder despite the fact that the rest of the heart continues to function properly.

Takotsubo cardiomyopathy: factors that trigger it

Even though, as in all pathologies, it can occur in other circumstances, some factors can condition the manifestation of a broken heart:

However, a broken heart condition may occur without any of the above circumstances.

According to various scientific studies, the symptoms that accompany Takotsubo cardiomyopathy are quite similar to those of a heart attack. Some of them are:

It’s very important that you go to a medical center if you present any of these symptoms. Also, you must be very careful with it because it could lead to death if it isn’t treated properly. This is precisely why it’s very important to go to a professional who can treat and assess your symptoms.

Why does Takotsubo cardiomyopathy happen?

One can’t say there’s a valid origin for all cases. However, as we indicated above, any type of intense stress situation, both emotional and physical, can compromise the cardiovascular system.

Some of the most common triggers are:

According to several studies, there isn’t a specific treatment for Takotsubo cardiomyopathy. Thus, what’s done in many cases, at the pharmacological level, is to use medication originally intended for anxiety disorders.

For this reason, in certain cases, the patient is allowed to recover and must undergo subsequent physical and mental exercises such as therapy or meditation. This is so that their body remains in the recovered balance.

The Teruel lovers – a case of Takotsubo cardiomyopathy

There are many legends that, throughout history, have told the story of those who died from a broken heart because they couldn’t stand the impossibility of a happy ending. A good example of this is the legend of the Lovers of Teruel.

People say that this story really happened or that, at least, there was one that’s similar to it. Note that various historical accounts do support the existence of Isabel de Segura and Diego de Marcilla, the protagonists.

However, although the story says that Diego died of love for Isabel, it could only be justified through broken heart syndrome from a medical point of view. This is because no one dies of love but only as a consequence of a strong emotional impact.

Of course, those times are over. As indicated above, this condition is treatable and the people affected by it can eventually resume their old routines.