Symptoms of Apiphobia, the Fear of Bees

You may suffer from apiphobia, the fear of bees, if you're terrified of wasps, bees, and bumblebees. Continue reading to find out more about its symptoms, causes, and consequences. 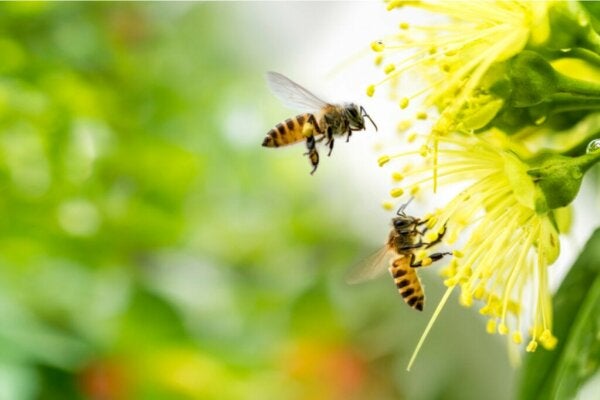 Apiphobia, the fear of bees, is one of the most common phobias. Their mere fluttering sound and even having one of them in the same room can trigger a series of strongly unpleasant symptoms.

Despite the fact that bees are quite useful to humans and fundamental in the cycle of nature, they trigger panic in many, many people. Studies indicate that approximately three percent of the population is afflicted with this phobia. Continue reading to find out more about the symptoms, causes, and consequences of apiphobia!

How does the fear of bees manifest?

Apiphobia is also known as melissophobia. It manifests when a person panics in the face of a stimulus: wasps, bees, or bumblebees.

In addition to fear, a person also feels discomfort and anxiety. Thus, the most common physiological symptoms are dizziness and vertigo. There may also be an increase in heart rate frequency, hyperventilation or difficulty breathing, nausea, tremors, headache, and the sensation of fading.

Similarly, cognitive symptoms can even affect a person’s mental function. A person with apiphobia may display a lack of concentration, intrusive thoughts about the possibility of there being more bees, thoughts of death, and distorted thoughts about the situation.

Finally, as with most anxiety disorders, two behavioral symptoms are primarily present: avoidance and flight. These types of behaviors are completely natural in a threatening situation. Thus, a person with this phobia will go to lengths to try to avoid bees. They’ll just flee at the first sight of one if this isn’t possible.

The cause of this fear?

You must take two possible causes into account when you’re talking about phobias. On the one hand, the person might already have experienced a traumatic interaction with one of these animals. It’s common for wasps to sting, and they’re stings are painful. This is definitely an experience nobody likes to experience.

In fact, apiphobia is a less irrational fear than many other animal phobias. It’s true that stings can pose a health risk. However, the severity of a wasp attack is determined by whether the person is allergic to it or not. Also, whether many stings occur simultaneously.

In addition, phobias are also caused by vicarious learning. In other words, if someone close to suffers from this probia, it’s likely they may have transmitted it to you. Perhaps you learned that you should avoid and react negatively to the presence of these insects. Furthermore, they may have reinforced your fear by constantly alerting you to the dangers of these insects.

Consequences of the fear of bees

Generally, animal phobias tend to appear during childhood. They usually disappear over the years. However, if the fear doesn’t go away, it’ll just linger, increase, and negatively impact a person’s daily life.

In this regard, it’s necessary to emphasize the difference between being afraid of bees and having a phobia. This is because the latter is an anxiety disorder. A phobia is a fear that limits a person’s life. For example, it can determine where they buy a house or even go to a park. Also, they’ll stop going to certain places, even if they really like them, just to avoid these flying insects.

As you can see, the symptoms of apiphobia range from mild to severe, depending on how they affect a person’s life. Nevertheless, it’s an anxiety disorder that must be treated.

Exposure to the stimuli should be gradual, either through this last technique or another strategy. For example, they’ll begin to work with images and progressively bring the person closer to the real stimulus until they’re able to be near it without experiencing extreme anxiety.

In short, the irrational fear of bees is a phobia that requires specialized psychological help. This is the best way to improve the quality of life and perform activities one would’ve been unable to do otherwise.

Trypophobia: Symptoms, Causes, and Treatments
Trypophobia is an extreme fear or feeling of repulsion toward any pattern of geometric figures very close to each other. Read more here! Read more »
Link copied!
Interesting Articles
Clinical Psychology
Hypochondria and Coronavirus: Symptoms and Treatment