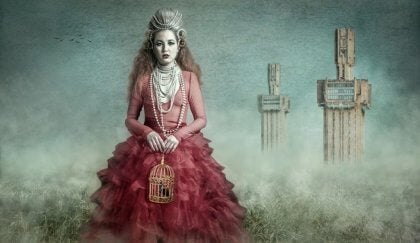 It may seem incredible, but in recent decades there’s been a rise in a social mandate that forces us to be happy above everything else. Avoiding suffering has become the motto that many adhere to regardless of its implications.

So much so that many now speak of “the dictatorship of happiness”. Analyst Ima Sanchís pointed out that, “Happiness has turned into an instrument of torture”. Paradoxically, depression has become a widespread epidemic. In one way or another, avoiding suffering has become a great source of suffering.

Many people feel a strong aversion towards what they call “negativity”. Nobody can talk about their suffering, mourn, or show signs of pessimism. It’s as if we were part of a great play where pain is prohibited. It’s as if we had suddenly stopped being human. To a greater extent, avoiding suffering is not living.

“Some of you have come here out of great trials and tribulations […]. You have been the veterans of creative suffering. Continue to work with the faith that unearned suffering is redemptive.”

The trap of avoiding suffering

In reality, few people would consciously say they want to experience pain. However, something different occurs at the unconscious level. Humans stumble a thousand times with the same stone and keep walking blindly into situations that cause suffering. But that is another story.

The point is that all that’s been said so far doesn’t imply that we should seek suffering. Rather, our goal is to draw attention to the trend of avoiding it. We don’t choose the pain in our life, it already comes with it. And trying to deny, avoid, or ignore it doesn’t make us happier. Quite the opposite, since that could be the beginning of more difficult pain to overcome.

The most disconcerting aspect of this current desire is that it becomes a form of deception. When someone asks you “How are you?” and you’re not doing well, you’re forced to lie. Your answer must be “Very good”. People advocating this ‘foolishness’ say that maybe you’ll convince yourself you feel good, even if it’s not true. Likewise, if you answer, “Bad, I’m in pain”, people will probably get away from you as if you were contagious.

Psychoanalyst Dr. Luis Hornstein says that many people arrive at his office with similar patterns of suffering. Some examples are excessive dependence on others, serious value misplacement, ups-and-downs in their self-esteem, and difficulty establishing meaningful relationships. We’re no longer in the times of Freud when people had exotic and unique ailments. Even suffering has become standardized in today’s world.

The desire to avoid suffering has also become the norm. That’s why many people go and seek advice to stop suffering. They don’t want to understand the reason behind their suffering and to work on that, but simply to eliminate pain. That’s why, when they fail to achieve this impossible task, they give up on psychotherapy. Instead, they submerge themselves in blind love, an invasive obsession, or an evasive cynicism.

We’ve forgotten that we all need suffering to grow. Emotional pain is what allows us to put impossible fantasies in their place and learn to deal with boundaries and losses. We learn to cope with them when we face suffering, not when we avoid it.

Learning to be happy

Happiness is something that goes beyond a temporary achievement or a moment of euphoria. It’s also much more than positive phrases tailored for each occasion. We’re happy when we learn to take advantage of every experience we live and when we learn to believe that we’ll be able to face whatever we come across.

We become a little happier when we accept that we’re also vulnerable beings, exposed to uncertainty and boundaries. Avoiding suffering is the opposite of happiness. To deny suffering is to deny ourselves. Likewise, it’s also denying the opportunity of growth inherent in every moment of pain in our lives to make us better people.

Confronting Pain and Overcoming it Makes You Stronger
Pain is an emotion that will always be a part of your life. Overcoming and confronting pain is the best way to live a happy, fulfilled life. Read on! Read more »

You know me very well. I'm here for you, I only have one chance to get you back, and I"ll…

Wellness
There Are No Right Answers in Life: Just Unique Stories

Humans have thoughts and memories. We seek to make sense of things. We think about the "why's" and "how's" behind who…

Wellness
I Have So Much to Say That If I Stay Quiet, Subtitles Will Pop Up