We are Stardust: We're Made to Shine 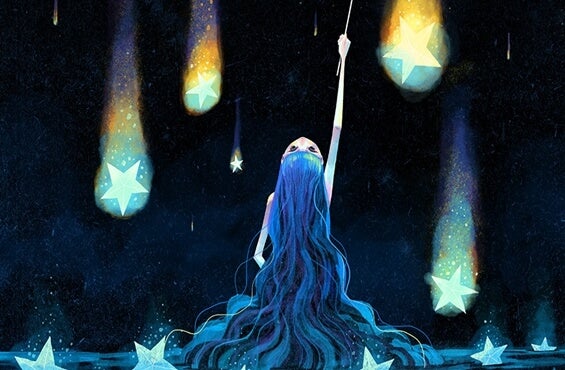 In his book, “The Cosmic Connection,” teacher Carl Sagan explains that human beings are made of an extraordinary substance: stardust.

In our DNA is the same material that forms the stars, the amazing things we see in the night sky. We too are made to shine.

These poetic words actually originated in the 70’s. It was singer Joni Mitchell who wrote the inspiring song, “Woodstock.” It encouraged people to “shine like stardust, like bright gold.”

But later on Carl Sagan gave a scientific basis to the idea. He showed that, within our very bodies, in every single cell, every little particle, there is cosmic history.

It’s a huge thing to think about — and exciting. And every year more research confirms it. Chris Impey, a scientist and professor of Astronomy at the University of Arizona, revealed in 2010 that all organic material containing carbon was produced by an extremely old generation of stars.

Plus, if we keep in mind that all of earth’s fundamental elements have that same origin, we can assume that 97% of our bodies is matter from those ancient stars.

It’s magical. We’re made to shine, to illuminate the world. But…why have we forgotten to shine? If we’re made of stars…why aren’t we happier?

We’re Stardust, but Sometimes We Live in Darkness

The darker the night, the brighter the stars look. Sometimes, all you have to do is look up at the night sky, contemplate infinity and there’s inspiration.

The stars, with their cycles, movement, silent music, and cosmic beauty, have always been a reference point for humanity. It’s true in everything from agriculture and science to spirituality.

But, here’s the true magic of the whole thing. We’ve limited ourselves to looking at stars as distant and even superior to us. It’s time to understand that we’re one whole. That this celestial matter is in every fragment of our being.

It’s not easy, true. As people, we tend to navigate in darkness. Through the swamp of perpetual unhappiness, deserts where the seeds of self-love no longer grow.

It’s a difficult truth. And as a simple example of this dark underside of humanity, we have a sick game that’s been making headlines lately. We’re talking about “blue whale.”

This morbid game originated in the Russian social network VKontakte in 2013. It’s now all over the world and it consists of 50 tests.

These tests, for many different, complex reasons, attract hundreds of teenagers. It takes them on a journey of self-sabotage, self-harm, and slow destruction. Until finally, in a supposed act of bravery, they win the game by taking their own life.

The creator of this sadistic game is Philipp Budeikin, only 21 years old. According to him, he made up this virtual challenge because “there are people who are biodegradable waste with no value for society.”

Russian psychologists suggested that there were deeper roots fluctuating from ideological to psychopathic in this young man and his followers. The most important and concerning thing is how many people are vulnerable through their devices. Every computer, every cell phone.

There are hundreds of young minds and fragile hearts that breathe without hope. Without energy, happiness, or the light they need for life, self-respect, and self-esteem.

Let’s Start to Shine, For Ourselves and Everyone Else

Think about the happiest moment of your life and enjoy the memory. Smile at a stranger. Make a playlist of music you like. Hug a piece of fruit. Talk in song lyrics. Draw an imaginary animal. Look for shapes in the clouds. Make a new friend. Sing in the shower…

“We’re stardust that thinks about the stars. ”
-Carl Sagan-

These ideas are also challenges and they make up the game “The Pink Whale.” It consists of 50 tasks for young people all over the world.

The idea is to help them be positive and offer an alternative to the Blue Whale. Right now, there are 290,000 followers and thousands have completed the last task. What it is: to save a life (like helping a classmate who is a victim of bullying). It’s just amazing.

Most of us have hope. Most of us want to help others. While it’s true that we occasionally forget how to shine, there’s always someone there to encourage us to find out light again.

There’s nothing like touching another person’s soul to give you a vision of how beautiful and enormous our cosmos is.

Letting Your Light Shine Can Annoy Those Who Live in the Darkness
Read more »
Link copied!
Interesting Articles
Cinema, Television, and Psychology
Carnage the Film: A Caricature of Everyday Life

The book The Knight in Rusty Armor holds some quite remarkable lessons about self-knowledge. What you witness in this adventure story is…

The pathologist Thomas Harvey stole Albert Einstein's brain after his autopsy in 1955. After that, a whole story full of…

From time immemorial, the human being has woven stories that give account of real facts, but are at the same time extraordinary. These are stories that are generally spread by different…