Shaun Ellis: A Man Among Wolves

Shaun Ellis has been a controversial individual since National Geographic did a story on his life. It’s very interesting to see how a human managed to lived among wolves. 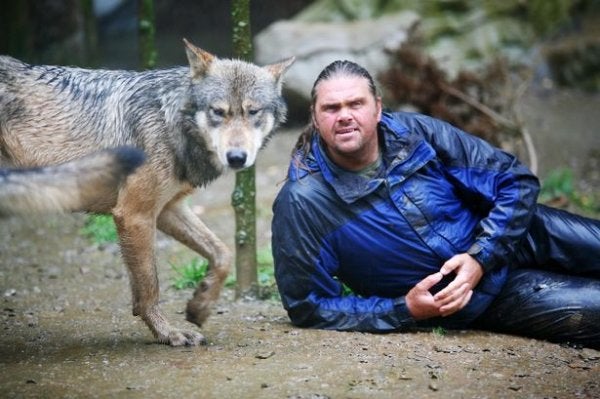 Some people believe that Shaun Ellis isn’t right in the head. Others believe he’s just eccentric and a show-off. There are others that admire him and think his life is inspirational and poetic, a true glorification of the instinctive friendship between humans and their environment.

Shaun Ellis became a worldwide phenomenon after National Geographic published a documentary about his life among wolves. He’s the only known human adult that willingly left to live with wolves and become part of their community. In fact, to the wolves, he’s their alpha male.

“They have called me bizarre, neurotic or silly, and said that what I’m doing is pointless. “Animals don’t need a human to teach them how to behave.” Many of these critics are generally misinformed about my intentions.”

Many scientists, especially biologists, have questioned Mr. Ellis’ experience because he wasn’t part of any research effort. Simply put, he loves animals and wanted to become a part of their lives to get them to know better.

There are known cases of children being raised by wolves and other species. Some have been abandoned by their families and, later, accepted in the pack. These examples are amazing and it’s fascinating to see how a human being was accepted by the wolves and became one of the pack. When you think of adult humans, the only man that so far comes to mind is Shaun Ellis. How could a grown man get into a wolf pack?

A love for wolves

Shaun Ellis was born in England in 1964. Since a very young age, he was into wolves. He began studying them by himself, and the more he knew, the more he felt interested in them. The first he saw a wolf was in a zoo. He says it was love at first sight.

Ellis moved on with his life, but always interested in wolves. He enlisted in the British armed forces. Meanwhile, every time he could, he would go into the woods at night to record wolves. Just looking at them was enough.

Afterward, Shaun Ellis got married and had five children, however, he spent more time studying wolves than being with his family. At first, his wife didn’t think his love for wolves was a problem, but, with time, she became annoyed. That’s why she abandoned Ellis and took the kids.

Shaun Ellis volunteered at centers with wolves in captivity, but this wasn’t enough. He couldn’t satisfy his need for getting closer to them. He thought that the best way to get to know them was getting closer to them in their natural habitat. He then decided to go to Nez Perce National Park in Idaho.

There, he lived with the local tribesmen and learned everything they knew about wolves. He also started getting closer to the animals, little by little. He wanted to be accepted as one of their own, but it wasn’t easy and it took eight months. One day, the wolves gently nibbled his knee. He knew this was a welcoming gesture and was genuinely excited.

Against all odds, Shaun Ellis started living with wolves and they ended up accepting him as one of their own. He ate the same raw meat they ate and, sometimes, they’d piss on it before they let him eat. There were some misunderstandings and some blows and bites. According to him, Ellis learned their howling cues. He lived with the pack for 18 months.

The return and a new chapter in life

It wasn’t easy for Ellis to come back to the human world. Seven months passed until he felt comfortable again among his own species. Later on, he published a book about the wolves’ language and afterward when to Combe Martin Park in England where he, unexpectedly, adopted three orphan cubs.

The three cubs saw him as their alpha male. When he figured the cubs were ready, Ellis’ released them to the wild to live among their own kind. Even though he left the pack, he hasn’t forgotten about them. National Geographic heard about Shaun Ellis and did a documentary on him.

Several biologists around the world have expressed their discomfort about Shaun Ellis’ techniques. After seeing the documentary on his life, they called him a sensationalist. However it may be, there’s no doubt that Shaun Ellis is a controversial character and many people were amazed by his story. No one can deny how hard Ellis worked to really get to know the animals he loves the most.

What Animals Teach Us
We tend to think that human beings are different from animals, and we believe that we are responsible for teaching them. But it's actually the opposite! Read more »
Link copied!
Interesting Articles
Culture
Pablo Neruda and Keeping Quiet: The Art of Connecting With Kindness

"Keeping Quiet," by Pablo Neruda, might be one of the most beautiful poems ever written. In it, he encourages us to…

Giuseppe Verdi was the composer of the masses. He thought of his country and its people when he composed and…