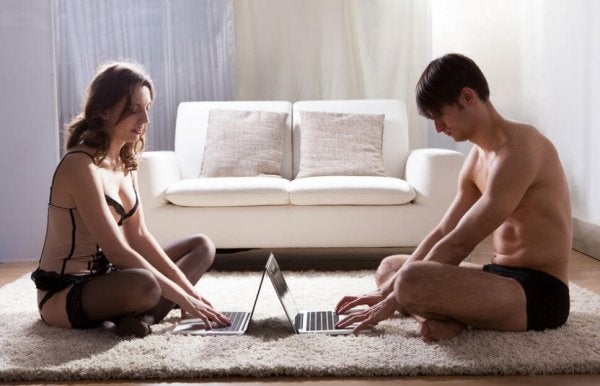 The Internet has changed all of our lives; nobody can deny that. Technology is present in every step we take. You couldn’t be reading this article without it!

The users most familiar with the Internet are young people, who are connected all day, sharing photos and comments on social networks, taking “selfies” and messaging on WhatsApp. However, young people are not the only people frequently “connected.”

On the other hand, the Internet gives us new ways to communicate, meet, and stay in touch, even to the point that many couples have the Internet to thank for their relationship. But what we are going to discuss in this article goes beyond that.

Maybe you have not heard of the term “sexting.” It comes from combining two words: “sex” and “texting.” Knowing this, you are probably able to figure out what this phenomenon entails.

This is how it works: a person films him or herself on a smartphone, tablet, or webcam while undressing, teasing, making sensual poses (and in the most serious cases, self-pleasuring or having sexual relations with another person). The picture or video is then sent out, or in some cases may even be recorded and watched live.

Even though sexting may be something fun for many people, just for flirting and teasing, it can carry with it other, more dangerous consequences. For example, if a video or photo is sent to someone only known through the Internet, that person may have intentions other than just passing the time.

As a trend among teenagers, sexting is particularly troubling. However, most parents aren’t aware of the dangers it creates. And the young people are not aware of what could happen to them, which is why they do not take precautions.

The following are the typical risks you take when “sexting:”

And there are even more risks, given that those who partake in sexting are vulnerable to falling into the hands of a sex addict, pedophile, or sexually depraved person. Therefore, it is highly necessary to be as careful as possible. This is not just a simple game; what is in play is the physical and psychological integrity of the young person involved.

What can parents do? Pay attention to children’s use of electronics, talk to them about the dangers they could encounter online, be aware of changes in habits or behavior that may indicate some problem or secret, etc…

Lastly, some advice for young people who are ‘sexting:’ remember that nothing you post on Facebook is private, and once you press the button, there’s not going back.

Sexting is not an inherently hurtful behavior, but rather the various factors surrounding it can be dangerous. It is necessary to be extremely careful and cautious. As it is always said, “better to prevent than to fix.”

Exercise is very beneficial for our health. After all, it helps us stay in shape, it protects us from many…