Are There Sex Differences in Intelligence? 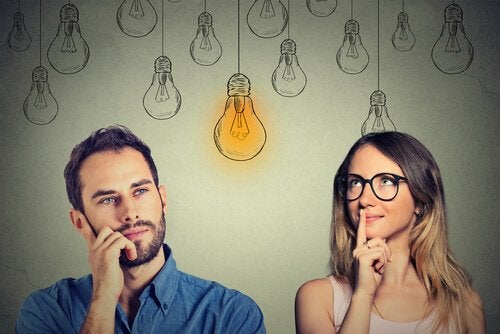 “Women must earn less than men because they’re weaker, smaller, and less intelligent”. A Polish MEP made these statements just a year ago. Unfortunately, we’ve all heard some unfortunate, documented comments that compared men’s intelligence to women’s.

The most widespread belief is that women are better when it comes to language, but men are better with math. But what scientific basis does this comparison have? Is it true that there are sex differences in intelligence?

Some researchers have criticized the fact that people study sex differences because they believe they can promote false stereotypes and prejudices. In this sense, we think that prejudice also exists in the absence of data, so research is sometimes the only way to separate myths from facts. This was what Diane Halpern, an American psychologist, stated when asked about this topic.

Researchers have used different instruments to study the differences in intelligence between both sexes. Some of the best-known ones are the Cattle Factor or the Progressive Matrices Test. But none of them have found a significant and systematic difference in intelligence between men and women. However, these similar test results can be associated with different patterns of brain activity. While women used more areas of the brain in charge of processing speed, men resorted more to their decision-making areas.

In addition, there’s another important fact: the differences found aren’t maintained over time. If we analyze the trend, we can see that these differences are decreasing. Men and women’s average scores are equal. It’s at this point that it would be logical to ask ourselves if the differences in specific aptitudes are really due to a lack of aptitude or simply to stereotypes. Do women obtain lower math scores because they’ve been discouraged or unmotivated to study these subjects? Does the same thing happen to men?

These changing results point to the idea that these differences may be due to a cultural rather than genetic origin. If this were the case, it’s our responsibility and the educators’ responsibility to stop promoting stereotypes and start motivating men and women equally. This would make it easier for them to decide for themselves what they want to study.

As we’ve already seen, the sex differences in intelligence are very small, if not nonexistent. It’s true that differences continue to show up in specific skills, such as verbal, spatial, or numerical. But it’s no less true that these differences are becoming smaller, which rules out their genetic explanation. If so, we’re playing a very important role in the existence of these differences as a society. We have the power to make them disappear.

Nowadays, there's supposedly sexual freedom and no taboos. And we say "supposedly" because, when it comes down to it, this…

Sex
More Frequent Sex is Good for Your Relationship

First-time sex is something that's hard to forget. It opens the door to new sensations, new ways of relating to your…

Not many years ago, an ancient sex manual was auctioned in the United Kingdom. Few people knew about its existence…

Most people are familiar with the virginity myth. You may have also heard the expression "being a virgin". It's an…