Saying "No" in a Positive Way 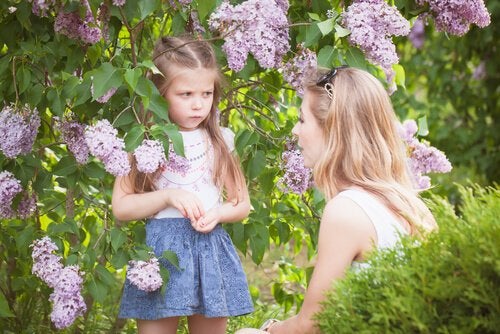 With the new ideas regarding education and positive discipline, the word “no” (usually used by our parents and grandparents) is often seen as an evil word. This makes many parents feel adrift, not knowing what to do to set boundaries. By saying “no”, they look for a way to impose their criteria, without coming off as too rigid or authoritarian. You can definitely learn to say “no” in a better, more positive way.

When saying “no” to your children to oppose one of their wishes, it’s important to make sure there’s a valid reason for it and that it’s justified. But there’s a line between saying yes and no. You could tell them they can do whatever they want later in the day when the time is right. You could also offer other alternatives that you might consider appropriate and that they may like.

Your goal is to help your children regulate themselves and learn to function under certain rules. Although it’s a long and constant process, don’t forget they’re just children and that you’re responsible for their education. Be patient!

Our children’s curiosity makes us anxious

Kids are curious by nature, but that curiosity seems to fade away when they grow up. Perhaps saying “no” stopped them from being curious because it made adults angry. In addition, the way they were learning at school, based on repetition and more repetition, didn’t help either.

On the other hand, it’s very difficult for parents to let their kids explore their curiosity as much as they want without being scared they’re going to hurt themselves. Just know that if you let your nervousness control you, you’ll always end up saying “no” and telling them “don’t do that!” or “get back here!”. Let me tell you, there’s nothing positive about that.

You can try to make an effort, but that effort could make you feel anxious as well. You might get so scared at one point that you’ll end up yelling “No!” at the top of your lungs. Note that, when doing this, you’re confusing your children. They will think “Why are you yelling at me when you gave me permission?”.

The best thing you can do is accompany your children while they’re exploring. Realize what’s actually dangerous for them. It’s okay if your kids fall while playing in the grass, not so much so when going down a ladder. Join them, but also give them space. Give them a little freedom and trust their judgment as they grow instead of bluntly saying “no”.

“Children have to be educated, but they have also to be left to educate themselves.”

Don’t just say “no”, explain to them why not

On many occasions, saying “no” is unnecessary. If you don’t want your kids to touch something, you can say “That’s dirty”, “That’s not yours” or “That can hurt you”. Explain to them the way things work like “Chairs are made for sitting” or “Treat people, things, and animals with respect”. Tell them the reasons behind your actions and say “I’m busy right now, I’ll pay attention to you in a minute”. That way, your kids will understand what’s going on instead of feeling yelled at for no reason.

Routines and boundaries can help you say “no” less, for example: “It’s time to take a bath and then go to bed, you have school tomorrow!” or “Let’s go home, it’s getting late and I have to make dinner”. I know it can be frustrating having your kids want to eat sweets and junk food all the time. However, you can tell them “Let’s eat fruits instead, they’re also delicious and they won’t make you feel sick later”.

There are so many other things you could do and say instead of just saying “no”. Explain to your kids the consequence of their actions, for example: “If you hit your friends, they won’t want to play with you again” or “If you don’t study, you won’t pass the test”.

Alternatives: saying “no” in a positive way

There are alternative options to saying “no”, ones that will help your children make their own decisions in the future. Your kids won’t always be easy, they’ll fight back! You’re the main authority, but forcing your children to follow the system without giving them room to breathe won’t help them grow up as individuals. Dealing with them will be difficult sometimes, they can make you lose your cool with their energy. However, with a different attitude and mindset, you’ll help them more.

Give them alternatives: “That’s too dangerous, help me with this instead”, “It’s raining, so we can’t go out. Let’s watch a movie instead!”. Tell them something that could make them go to bed easier, offer the option of taking whatever they want to bed with them: a doll, a teddy bear, or a book.

For when you DO have to say “no”

Talk to them firmly, but don’t yell. There’s no reason for you to be rude to them. Don’t insult them nor say things you might regret later. Be straightforward and address them by their name. Say things in a better way and be clear: “I’m mad at you, I did NOT like what you did”.

Talk solely about their actions, but don’t make them think their behavior defines them. Instead of saying “You’re a bad kid”, say “You did a bad thing”. Don’t say “You’re lazy”, say “You took way too long to do this”. Be their role models and show them how it’s done. Also, remember to show them the consequences of their actions and be bold: “You didn’t brush your teeth, so I won’t read you a story tonight”.

“Focus more on who your child is than on what your child does. Remember you’re growing a person, not fixing a problem.”

This new approach will probably require a lot of effort on your part. You might feel tired and sometimes defeated, but it won’t always be like that. Once your children get used to this dynamic, it’ll all get easier. They’ll be able to understand your point of view and think about their actions, what they want, and what they don’t want beforehand.

Children Need Emotional Expression to Grow
"Don't cry," "Big kids are tough," or "You have to be brave" are very common expressions adults use to comfort upset kids. It may seem like they work with some kids, at least in the short term. In the long term, however, they encourage kids to keep their feelings inside. Read more »
Link copied!
Interesting Articles
Psychology
8 Characteristics of Resilient People

Psychology
The Sweetness of Doing Nothing

Not long ago, a 4-year-old child asked me and a few other adults to “enjoy some time laying in bed." As we…

Psychology
4 Signs That Give Away an Insecure Person

Have you ever known someone who made you feel inferior, maybe even like a total weakling, and all the while,…

Psychology
How to Cope With Paralyzing Fear and Anxiety

A girl looks out the car window, watching what's going on around her. She's in the back, feeling relaxed and…