Ruth Benedict and Her Search for Cultural Models

Ruth Benedict was one of the great anthropologists of the 20th century in the United States. A disciple of Franz Boas and professor at Columbia University, she was one of the social scientists who sought to explain the complex relationship between the individual and society through the study of personality and culture. 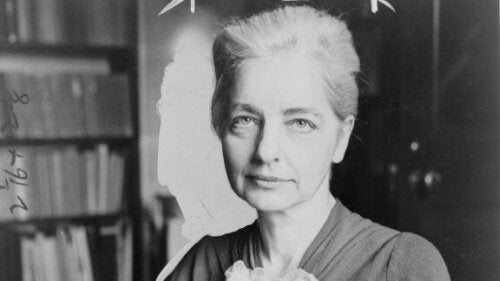 Ruth Fulton Benedict (New York, 1887-1948) was an American writer and anthropologist. She began her professional life writing poetry, but soon after discovered anthropology. During her time as a student, she became friends with anthropologist Margaret Mead. However, her mentor and teacher was Franz Boas.

Boas’ disciples were responsible for spreading relativistic ideas in the discipline of anthropology. In addition to this, her studies built bridges between psychology and anthropology, as she belonged to what has come to be known as the Culture and Personality movement.

Benedict’s life wasn’t a very normal one, considering the times she lived in. The world of research in those days was an almost exclusively male territory.

At the end of the 19th century and well into the 20th century, women didn’t have an easy time of it. Access to university studies was also something that was, on the whole, only permitted for men.

For this reason, Ruth Benedict is a fundamental figure of the last century, not only because of her contributions to anthropology but also because of the exceptional nature of her specific case: being a woman of humble origin. Throughout this article, we’ll discover her contributions and take a deeper look at her life and work.

First steps in the academic world and the discovery of anthropology

Ruth Benedict’s life and academic career broke the established norms and patterns for women of her time. Ruth’s father was a surgeon, but he died when she and her sister were still young. The family moved from the city to the country to live with Ruth’s grandparents. Her mother was a teacher, but the family’s financial situation was rather precarious.

Ruth and her sister were very good students, and, as a result, they were able to obtain scholarships that enabled them to go on to higher education.

Despite her situation, Ruth Benedict managed to go to university and graduated from Vassar College in 1909, specializing in English literature. She then spent three years as a high school teacher.

When she was about 30, she enrolled at Columbia University to study philosophy and anthropology. Her motivation was to give her life a social and intellectual meaning beyond literature. There, she met the great American anthropologists of the time: Franz Boas, Robert Lowie, and Alfred Kroeber.

“What really binds people together is their culture, the ideas, and standards they have in common.”

Her first fieldwork was conducted during the summer of 1922 among the Serranos, an ethnic group that resides in two Indian reservations in Southern California. At that time, she was under the guidance of Alfred Kroeber.

She taught her first anthropology classes with Franz Boas to a group of high school students between 1922 and 1923. The following year, she moved to Columbia University, where she started as a teaching assistant and finally became a teacher in 1930.

The start of Ruth Benedict’s career represents the progressive empowerment of women in North America in the early 20th century. She worked outside her home, did numerous fieldwork assignments throughout her country, and published scientific journals, among other activities. An example of empowerment that, unfortunately, wasn’t the norm in her time.

Ruth Benedict and her contributions to anthropology

His doctoral thesis was published in 1934 under the title Patterns of Culture. This work is now considered a classic of anthropology. All the ideas that Benedict expounds in this work are still in force today and widely accepted. However, at their time of writing, they were rather new to people’s ears.

In Patterns of Culture, she proposed that cultures give greater privilege to certain personalities and reject others, forming specific cultural models. Therefore, cultural models have a direct influence on the formation of the personality of each member of any given society.

During World War II, Ruth Benedict discovered a new area of study for her time. She applied anthropological thinking to the study of contemporary and modern societies through interviews and written documents, rather than through fieldwork.

During this time of conflict, Ruth Benedict used her knowledge and experience to study, at a distance, the societies in Romania, Siam, Germany, and the Netherlands.

Near the end of the war, she became interested in Japan, and a book entitled The Chrysanthemum and the Sword was born. This book is now considered a classic. In it, she analyzes the most characteristic cultural patterns of Japanese culture at that time.

These experiences in long-distance anthropology led to the creation of a manual on the subject – The Study of Culture at a Distance. In the spring of 1947, she was commissioned to carry out a large-scale project on the contemporary cultures of France, Germany, Poland, Russia, and China.

Because of her original career which didn’t have her bound to any particular area, Ruth Benedict became president of the American Anthropological Association (AAA) in 1946. This was, indeed, a powerful institution within the field of anthropology.

The search for cultural models

In her book Patterns of Culture, Ruth Benedict emphasized that what’s really important in the formation of individual behavior is culture and not biological aspects. Therefore, behavioral differences between different societies are due to their culture, which shapes different models. To demonstrate this, she compared three different cultures:

After describing each of the three cultures in detail, Ruth Benedict reflected on different theoretical questions. For example:

“A culture, like an individual, is a more or less consistent model of thought and action.”

Benedict concludes that a culture is the combination of the beliefs, attitudes, knowledge, and emotions that characterize a society. This isn’t simply an accumulation, but rather an interrelated whole that forms particular cultural models.

Benedict was a woman ahead of her time, had loving relationships with women, and lived according to what she liked best. Her studies are still relevant today. In addition to all of this, she was able to see the threat of Nazism and tried to fight against it from the point of view of education.

Géza Róheim and the Fusion of Psychoanalysis and Anthropology
The name Géza Róheim isn't as well known as some in the world of psychoanalysis, but he was one of the most brilliant minds in the field. Read more »
Link copied!
Interesting Articles
Biographies
Felix Boehm, a Controversial Psychoanalyst