Rumors: What Are They and How Can They Be Dangerous? 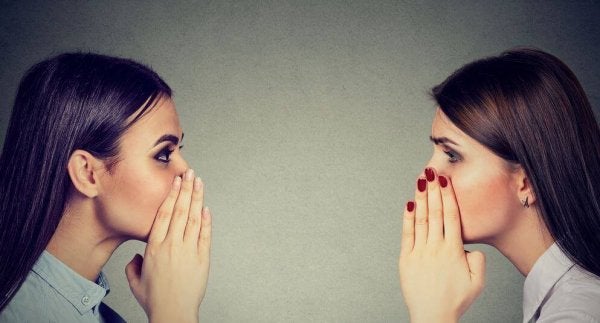 Rumors: we’ve all heard some and we’ve all spread some. In more traditional, conservative times they shook entire families. Today, they circulate differently because the way we share information has also changed.

The fact is that rumors have enormous potential to upset things, whether socially or personally. We don’t enjoy being on the receiving end of one, since they usually don’t have good intentions. They are somewhat veiled messages.

Normally rumors are oral messages: word of mouth. The paradox is that there is no evidence to support rumors, but the more that people share it, the more they see it as true. They follow the law that if you repeat something often enough, people will believe it.

The source of the rumor is usually not easy to identify, especially because the message transforms when we repeat it. The game of telephone makes the rumor transform into something it was not originally.

At the beginning, it’s usually a concise message about a suspicion or doubt. “I heard they’re going to start firing people”… “Ana didn’t come to work, and she’s been sad all week. I think she’s depressed”…

However, our brains prefer certainties rather than hypotheses. So, what initially began as a hypothesis ends up becoming almost a dogma. To finish defining rumors, we think that they follow certain very clear laws:

Another property of rumors is that they tend to become viral. Each receiver is at the same time a potential transmitter of the information. The receiver often adds their own opinion. Their manner and tone of transmitting it also changes it.

How can we end rumors?

The answer is as simple as it is impossible: preventing people from communicating. A more realistic response is equally difficult, although less than the first one. It is that we should be critical of the information we receive.

We should ask ourselves if the source is reliable. Ask (if possible) the person you heard it from whether they also trust the information. We should also think about if the rumor benefits someone, and if that someone started the rumor.

One rumor to be especially cautious of is a rumor about about minorities or groups relatively unable to defend themselves. That’s why we say, “history is always told by the victors.” The first payment the defeated must make is to accept the victor’s version of the story. Think of the dictatorships that ravaged Europe in the first half of the 20th century.

We don’t have to take a trip in a time machine. Here in the present we can see that many stereotypes about marginalized groups are fed systematically by rumors. Rumors nourish prejudices and discrimination.

Why Do So Many People Like to Gossip?
Some say gossip started when human language emerged. They say gossip even played a helpful role in the growth of today's large modern societies. Read more »
Link copied!
Interesting Articles
Culture
Dog Stories that Made History