Rosemary Kennedy and Her Sad Story 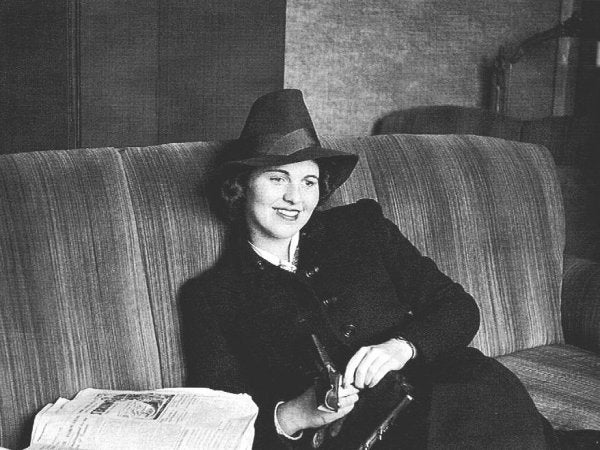 Sister of Robert, Ted and John Fitzgerald Kennedy, Rosemary Kennedy was the victim of one of the most terrible psychiatric techniques of that time: the lobotomy.

The history of lobotomies is still very recent. For much of the twentieth century, it was the ideal technique to correct diseases such as schizophrenia, depression and even mild disorderly or violent behaviors.

One of its biggest proponents was, without a doubt, Walter Freeman. He performed more than 3,000 lobotomies, sometimes up to 25 in one day. He spent much of his life trying to prove that this technique was indeed beneficial for his patients.

But was the lobotomy an appropriate way to resolve violent behavior and diseases such as schizophrenia? Sectioning the nerve pathways between the frontal lobe and subcortical nuclei did not prevent aggressive behavior. Later on came antipsychotics and chlorpromazine, for example, which then opened a new therapeutic field. But he surely left behind a terrible wake of many anonymous victims.

As was the case of Rosemary Kennedy.

Rosemary was the third of the Kennedy family, sister of John Fitzgerald and six brothers. She was the slower and less brilliant of them all. She had dyslexia and followed the descriptions of the time of  suffering a slight delay, perhaps borderline. At the arrival adolescence her family expected her problems would worsen and the challenging behaviors, protests and arguments would begin.

Her father, Joe Kennedy, viewed her brothers as his favorites and could not imagine having a daughter with slow capabilities. Rosemary began to run away from home, arriving each day with a different boyfriend. She was not doing well in school and didn’t maintain a stable partner with whom she could have an acceptable marriage. Mr. Kennedy could accept that his sons had all the mistresses they wanted, but more than anything was afraid that Rosemary would become pregnant. A scandal that their public image could not handle.

They soon came into contact with Dr. Walter Freeman and his medical technique. The family was told that aggressive behaviors that were inappropriate for the young girl would be quickly corrected. What’s more, they hoped to achieve what Joe Kennedy wanted most: to raise the IQ of his daughter. So everything was ready and prepared for her to be operated on. It is true that both the brothers and a large part of the family were opposed to the operation, but the decisions of the Kennedy patriarch were too heavy to object.

Rosemary was 23 when she was lobotomized in 1941. But did this intervention do anything? You can already guess the outcome. After the operation Rosemary Kennedy remained with the mental age of a three year-old child.

After Joe Kennedy saw the result of the intervention, he made a quick decision. Rosemary would cease to exist publicly. It was said for a while she worked as a governess in Wisconsin, later suffering meningitis and was therefore hospitalized. But the reality was sadder. This woman spent her life institutionalized in nursing homes throughout the entire territory of the United States. It is said that the patriarch of the Kennedy never regretted that decision. The political careers of his children began to take off and the figure of someone like Rosemary could harm their success, he thought.

It was in October 1975 when the truth came to light under the headline “The Hidden Kennedy Daughter”. They had brought Rosemary to a church service and she had escaped. She had fled from the church without her nurses and family noticing. A reporter followed her and realized what was happening. At that time she was 57 years old and was confined in a convent in Wisconsin.

Quite a shame and an example of the most incomprehensible psychiatric techniques in history. Rosemary Kennedy died in 2005,  one of the few survivors of that family that was so full of successes and tragedies.

The seven IT trends in education of 2020 will revolutionize the educational process as we know it, and take the…