Romantic Passion and Creativity Are Related

In today's article, we'll talk about how to awaken romantic passion in your relationship if it's become boring. It seems that highly creative people are so in all aspects of their lives. Therefore, they're also quite capable of establishing and maintaining fun relationships that seldom become monotonous. 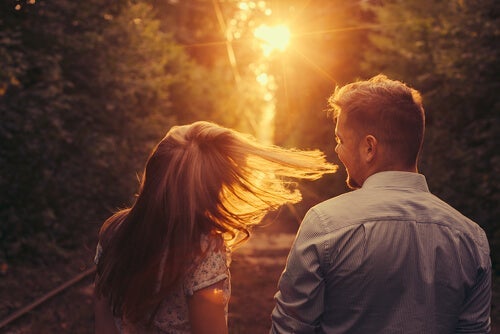 Today, we’d like to talk about romantic passion and creativity. Although they may not seem to be related, recent studies found that there’s, in fact, an important connection between the two. Thus, creativity is proposed as the key to keeping the romantic passion alive in your relationship.

Some believe that long-term emotional relationships are sustained by a sort of inertia in which most routines, objectives, and ways of understanding life are fully shared. That, somehow and over time, romantic passion goes out the door and that it’s normal. However, it might not be the case. In fact, the romantic passion in long-term relationships may have a lot to do with how much creativity there’s in a relationship.

But what exactly is “romantic passion”? Well, in a relationship it refers to the desire for one another. That is, to the “eros”, that initial sexual attraction and romantic yearning that we feel when we fall in love. That spark that many couples lose after a few years or even months and that opens the door to another kind of love. At the very least, that’s what we believed until recently. Similarly, we know that relationships based exclusively on romantic passion don’t last too long. They seldom consolidate as long-term partners.

Incidentally, romantic passion is something we all need to a greater or lesser degree. Perhaps, it’s even something we shouldn’t give up in favor of a stable and monotonous relationship over time. According to studies conducted by Northwestern University and the University of London, romantic passion isn’t a stranger in long-term relationships. It’s mainly that maintaining passion does require a certain degree of creativity.

“I would rather die of passion than of boredom.”

To what extent is romantic passion important in our lives?

It doesn’t seem that most people are willing to lose the romantic passion in their lives, even when time goes by and such loss gives way to a more stable relationship.

Romantic passion plays an important role in our development as people and in our personal well-being. Also, it helps us maintain a stable relationship. The popularity of poetry, novels, and romantic films are proof of it. This is because, deep down, none of us are happy when we lose that loving feeling we once shared with our lovers. We don’t want it to be overcome by that other kind of love.

Passion is what moves the world and what moves our lives. Finding it or losing it brings out the best and worst in us. It’s that powerful but it’s also that fragile.

A study on romantic passion and creativity

The results of studies conducted on this subject indicate that about 40% of couples who’ve been together for about ten years are still in love.

Researchers don’t just have their testimony to prove their point. The results of some MRI tests performed in those couples are rather interesting. These studies revealed that people who reported a high degree of romantic passion with their long-term partners also showed the same high levels of activation of the brain regions as those people who were in the early stages of a passionate relationship.

We can easily support these results by focusing on matters such as regular intimacy and the intentional pursuit of sexual satisfaction. Also, on the positive experiences of a relationship. However, this study decided to focus instead on another characteristic that seems to be common in the lives of these people: creativity.

Many studies demonstrate the importance of the creative process in our emotional well-being. However, the research goes further. It seems that highly creative people are better equipped to attract partners to create important emotional bonds with, connections that only become stronger over time. That such people are more capable of keeping the romantic passion alive.

The aforementioned studies linked creativity to people’s ability to see their partner through rose-colored glasses. It’s what psychology describes as “positive illusion”.

This type of illusion seems to overlook the deficiencies in a relationship. In contrast, it’s a solid basis in which a person feels more valued and more desirable. It helps them feel more attractive and happier in their relationship.

Creativity in this kind of long-term relationships is the fundamental element that keeps boredom and dissatisfaction away from them.

Passion isn’t exclusive of romantic relationships. Conversely, passionate people tend to be this way in nearly every aspect of their lives. They’re passionate about their work, friendships, and recreational activities. They tend to be much more open than others to new experiences and ways of thinking.

Consequently, we begin to understand that romantic passion is just another facet of a passionate person’s life. Keep in mind that maintaining this creative vision as a way of life isn’t exclusive to those who seem to be innately passionate.

Anyone can develop a passion for life and everyone is creative. The most creative people are those who aren’t afraid to experiment and fail. So, you can certainly get in touch with your creative side when you’re ready. Consequently, cultivating your passion will be one of the best things you can do for yourself. Nothing can keep you from refusing to live without it. Have the courage to reclaim it and rediscover it and recover that spark you thought you lost.