Robots and Children With Autism 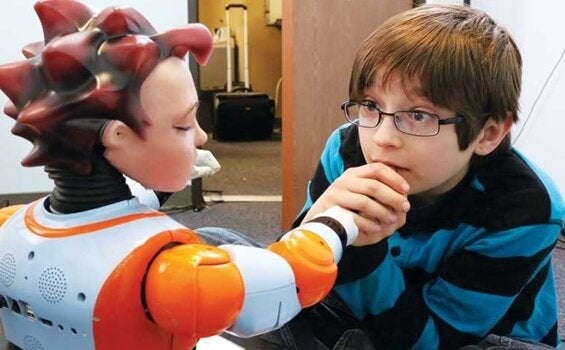 Robots are getting so advanced that some of them are starting to become a normal part of our lives (cooking robots, vacuum robots). Plus, some of them have already started to look more human. With that in mind, it can be a bit “scary” seeing how fast these programmed machines are advancing.

But that doesn’t take away from the huge potential they have now and will have in the future. Out of all that potential, one thing that stands out is their special ability to help children on the autism spectrum.

A lot of children with autism experience social isolation and have trouble communicating. These things make it harder to support them. It’s like trying to get through a brick wall. But there’s good news — it looks like robots are having more success than us in this area.

“These robots, unlike people, display simple and easily separatable patterns of behavior. They can talk and even follow along with simple conversations. They can make head motions and even have some facial expressions, but they’re easy to tell apart.”

Children with autism interact with robots

It’s a strange paradox: a lot of children with autism who have trouble communicating with their environment don’t have any issues when it comes to communicating with a robot. We’re specifically talking about small, simple, emotional robots with eyes and limbs.

These robots have lead to a new concept that we could call “robot therapy.” In this case, the people they help are children with autism. But how are these robots managing to do something that not even we can do?

To try to find some answers, we’re going to look Juan’s story. He’s a 6-year-old boy who was diagnosed with autism at age 2. He stopped talking, interacting with other people, and retreated farther and farther into himself. Because of that, he became quite aggressive, which was also quite hard on his loved ones.

Juan’s mother didn’t know who to turn to. They had tried all the recommended therapies, but nothing worked for Juan. It seemed like he was only getting worse, not better. So his mother didn’t hesitate when she heard someone mention the possibility of doing therapy with robots. And it didn’t take long for the results to appear.

For some reason, Juan started to leave the bubble he’d put himself in. He started to interact with the robot doing his therapy. His mother couldn’t contain her excitement! Her son touched the robot, laughed, and even repeated some words it said. It was a huge achievement.

The University of Miguel Hernández de Elche and the company AISOY Robotics are still working together on a plan for robot therapy that can help children with an ASD (autism spectrum disorder).

Interacting with robots helps children in their daily life

Because he had shut himself off, stopped talking, and stopped interacting with people, Juan couldn’t improve his communication skills. Thanks to robot therapy, his vocabulary started to get better. It also stimulated his emotions. Juan started to laugh and he was finally able to express what he felt.

Without robot therapy, maybe Juan would never have gotten out of the box he shut himself in. Maybe he just needed more time. The only thing we know for certain is that this new kind of therapy has had incredible results. It helped Juan and many other children interact with their environment and develop social skills.

A lot of children with autism spectrum disorders have an amazing talent for music or painting, for example. They invest all their creative energy into these things. It’s the only kind of interaction they’re capable of. It doesn’t matter whether it’s with a paint brush, an instrument, or something else entirely.

Now they can start to interact in a more “human” way. Robots help children with autism take steps forward, and then shift that progress into their daily life.

There’s no cure for autism yet. But people are still researching new ways to stimulate children with autism so they can develop the tools they need to interact with their environment. Thank you, robots!

8 of the Best Films about Autism
Autism is a complex disorder that can lead to social rejection. These 8 films hope to raise awareness and understanding about those that have autism. Read more »
Link copied!
Interesting Articles
Psychology
I Don't Have Time to Criticize You, I'm Improving My Self-Esteem

Throughout our lives, we often criticize each other, and then feel guilty and upset about it, which is very difficult to…

Psychology
Anxiety's Impact on your Brain: A Maze of Exhaustion

Anxiety has a huge impact on your brain. Cortisol, adrenaline, and norepinephrine all put you on alert and on the defensive.…

Many consider trigeminal neuralgia to be the most painful condition a human being can experience. Sometimes it's even a direct cause…

Psychology
Why Routine Is So Important

Are people who are always on the go truly happy? Is the world more fun if you're always doing different activities? In this article we're going to explore whether routine…