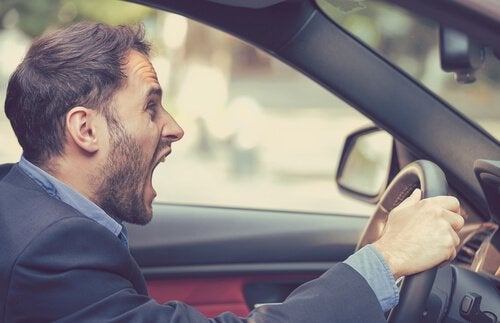 There are many variables that determine whether or not you’ll have a car accident. Some depend on the vehicle or the place, and others depend on the driver. The driver’s experience is very important, as well as how skilled they are behind the wheel. However, the driver’s personality and emotional state also play an important role. Poor impulse control and negativity can often lead to road rage.

In that vein, one problem that’s directly related to this is road rage. If the person who’s driving is in a bad mood or in a negative frame of mind, that increases the risks of a traffic accident.

Road rage can directly or indirectly harm other drivers or pedestrians.

Impulsivity behind the wheel

For some people, driving is more than a simple means of transportation. In fact, for many people, their car is like their second home because they spend so much time there. Their car is like a metal shield. The driver feels protected because it makes them feel immune to outside aggression.

People with road rage tend to have an impulsive personality. When they get into their car, their negative attitude leads them to do things that go against social norms and behavior.

If you have a hostile personality and you’re in a stressful situation, odds are you won’t react well. That’s what happens with people with road rage. As you can see, it isn’t just the individual’s temperament. External factors also come into play. Things such as outside noise, the state of the road, or the weather can all affect an already angry driver.

External factors related to road rage are the things that are happening that the driver can’t control. For example, traffic jams, no parking spaces, or people breaking traffic laws.

These things can increase the driver’s stress and anxiety. That will, in turn, increase their hostile behavior and give them road rage. However, not everyone needs significant external stimuli to become violent at the wheel. The decisive factor in whether or not the driver will respond aggressively is their emotional state.

External factors can be the straw the breaks the camel’s back, but they aren’t usually the direct cause of road rage.

The internal factors have to do with the driver’s mental and physical state. In other words, their emotional state and ability to concentrate on what they’re doing.

For example, if you wake up in a bad mood that stresses you out or makes you angry first thing in the morning, you’re more likely to have road rage. That same stimulus can provoke different reactions, depending on the driver’s emotional state. A driver who cuts you off and then immediately apologizes for their behavior is very different than a driver who uses rude language and reacts violently.

To prevent your anger from taking over while you’re driving, keep the following suggestions in mind:

“If you see what is right and fail to act on it, you lack courage.”

Driver’s education is a solution to road rage

On the road, as in life, you don’t know everyone’s circumstances. You can’t know if the driver in front of you has had a bad day or has a headache. Remember that everyone is different and not everyone has the same experience on the road. Some people don’t have very fast reflexes or they simply get distracted. The important thing is that everyone behaves in a respectful and polite manner.

Experts believe that the solution to road rage is a better driver’s education. They think we need clear messages that reach the general population, especially the little ones. They also say that schools need to include this subject. We should be explaining the consequences of violating traffic laws to young children.

Lastly, driver’s education has to start at home. It’s a perfect way to avoid road rage and make sure that that’s not the example we’re setting for our children.

“In order to understand security you don’t have to confront it, but incoporate it into yourself.”

Intermittent Explosive Disorder: When Frustration Turns Into Aggression
Some people feel a disproportionate amount of frustration in comparison to its trigger. They suffer from intermittent explosive disorder. Read more »
Link copied!
Interesting Articles
Cinema, Television, and Psychology
Twin Relationships in the Film Industry

Sister of Robert, Ted and John Fitzgerald Kennedy, Rosemary Kennedy was the victim of one of the most terrible psychiatric…