Piaget And His Theory About Learning 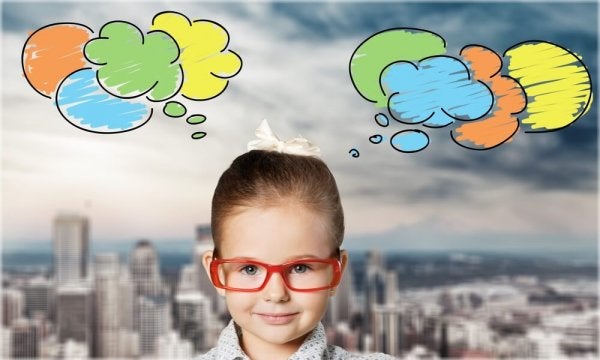 Jean Piaget is one of those names that is always written in gold letters in the field of psychology. His theory about childhood cognitive learning has made us consider him as the father of modern pedagogy. He discovered that the principles of logic begin to form inside us before the acquisition of language itself. They come from sensory and motor activity and interaction with the environment, especially with the social cultural environment. Let’s look at the link between the works of Piaget and learning.

Psychic development, which begins at birth and ends in adulthood, is comparable to organic growth. It’s a constant progression towards a state of equilibrium. Our bodies evolve to a relatively stable level, characterized by the end of growth and the maturity of the organs. In the same way our mental life can also be thought of as evolving towards a state of final equilibrium, which is reached in adulthood.

Piaget’s theories about the psychology of learning are based around mental development, language, play, and comprehension. That is why the first task of the educator is to generate interest. This interest is an instrument with which they can understand and interact with the student. The research on this was carried out over almost forty years. This theory doesn’t only seek to get to know the child better and improve the pedagogical or educational methods, but also to value children as people.

“The main goal of education in schools should be the creation of men and women who are capable of doing new things, not simply repeating what other generations have done. Men and women who are creative, inventive and discoverers. People who can be critical, validating, and not necessarily accepting, everything that is offered to them “

Piaget’s main idea is that it is essential to understand the formation of the child’s mental mechanisms in order to acquire their nature and their functioning in adult life. His pedagogical theorizing was based on psychology, logic, and biology. This is reflected in how he defines thinking, and how it is conditioned by genetics and built through social cultural stimuli.

A person receives information in an active way, however unconscious and passive the processing of it may seem.

According to Piaget’s Learning Theory, learning is a process that only makes sense in situations of change. Therefore, learning is partly knowing how to adapt to these changes. This theory explains the dynamics of adaptation through the processes of assimilation and accommodation.

Assimilation refers to the way in which we receive a stimulus from the environment at a society level. Accommodation, on the other hand, implies a modification of the current society in response to the demands of the environment. Through assimilation and accommodation we are mentally restructuring our learning throughout development. The term used for this is cognitive restructuring.

This accommodation, or adjustment, is the process by which the subject modifies their plans and cognitive structures, in order to incorporate new objects into the structure. This can be accomplished by creating a new plan, or by the modification of an existing one so that the new stimulus and its related behavior can be integrated.

John Lennon said that life is what happens to us while we are making other plans, and it often seems that way. Human beings need a certain security to live in peace, and that is why we create the illusion of permanence. We imagine that everything is static and nothing changes, but this is not really the case. Everything is constantly changing, including us. We often aren’t aware of it, until the change is so obvious that we have no other choice but to face it.

We socialize through language

During early childhood we witness a transformation in our intelligence. From being simply sensory motor-based or practical, it changes into proper thoughts, under the double influence of language and socialization.

Language influences it by allowing the subject to explain their actions. It facilitates a building of the past, and helps to recall moments and situations that helped to guide our previous behaviors.

It also allows us to anticipate future actions, which haven’t yet taken place, replacing them with words, and perhaps not ever carrying them out. This is the starting point of our thoughts as a cognitive process and is Piaget’s own thinking as well (Piaget 1991).

Language itself, in effect, combines concepts and notions that belong to everyone and that reinforce individual thinking through a broad system of collective thought. A child has reached this latter stage of development when he can finally express himself in this way. In this sense, and on a general level, the same thing happens with thoughts as well as with behavior .

Instead of fully adapting to the new realities that a child discovers and building them gradually, he or she must go at a much slower pace. They must integrate this information to their character and performance. This egocentric assimilation characterizes both the beginnings of the child’s thinking and those of their integration into society.

“Good pedagogy must place the child in situations in which he can have real life experiences. Language helps us to anticipate those situations”

Behavior as the engine of evolution

In 1976, Piaget published a small book entitled Behavior, The Engine of Evolution. In it he presents his perspective on how our behavior functions as a determining factor of evolutionary change. He argues that it is not a mere product of it, which would have been the result of mechanisms independent of the action of these organisms.

Piaget argues, mainly with neo-Darwinian positions. He believes that biological evolution doesn’t only occur by natural selection. A natural selection which is exclusively the product of a random genetic variability and with different rates of survival and reproduction in function of adaptive advantages.

From this perspective, it would be an independent process from that of the organism’s behavior. This could only be explained by the consequences, either favorable or unfavorable, of the phenotypic changes caused by completely random mutations and their transmission throughout the generations.

Behavior, in Piaget’s eyes, constitutes a manifestation of the global dynamics of the organism as an open system in constant interaction with the environment. It would also be a factor of evolutionary change.

To try to explain the mechanisms by which behavior would fulfill this function, he draws on the concept of epigenetics and to his own explanatory model of adaptation in terms of assimilation and accommodation. Epigenetics is the mutual interaction between a genotype and the environment in order to construct the phenotype based on experience.

“When you teach a child something, you take away forever his chance of discovering it for himself”

Piaget argues that all behavior involves the essential intervention of internal factors. He also points out that all animal and human behavior involves adapting to the conditions of the environment. This is in addition to its cognitive assimilation, which we understand as integration to a previous behavioral structure.

We consider Piaget’s contributions to education as extremely important for the formulation of the theory of education. Piaget is the founder of genetic psychology. This has significantly influenced the theory and the educational practices that has been generated around it. This is distinct from the natural changes over time which have given rise to different formulations.

Piaget’s contributions have led to the development of many important papers. His work centers around his discoveries about human thinking from a biological, psychological, and logical perspective. We should clarify that the term “Genetic Psychology” is not thought of in a purely biological or physiological context, as it doesn’t refer to human genes. It is referred to as “genetic” because he developed his work with regards to the genesis or origin of human thought.

One of the great contributions of Piaget to education today was to have left it well founded regarding teaching objectives. The objective is that in the first years of a child’s education, they child should achieve good cognitive development. This should be the first focus in a child’s learning. This is absolutely essential and is complementary to what the family has taught at home. These rules and regulations allow the child to adapt well to a school environment.

The second objective of education

There is yet another contribution from Piaget, which we can see reflected today in some schools. He sustains that the theoretical teaching that a child receives in the classroom is not enough in itself to completely take on board all there is to know about a subject. Learning involves other pedagogical methods, such as the application of knowledge, experimentation, and demonstration.

The second objective of education is to train minds to be be critical. To train them to verify and not necessarily accept everything that they receive. The great danger today are the topics, collective opinions, and tendencies that already exist. We have to be able to challenge these ideas and distinguish between what is right and what is not.

Going through Piaget’s theories would allow any teacher to see how the minds of their students are evolving. The central idea of ​​Piaget’s theory is that knowledge is not a copy of reality, but is the product of a person’s interaction with his environment. This knowledge, therefore, will always be individual and distinct from any other knowledge that exists.

Discover the Kumon Method of Learning
by Toru Kumon, creator of the Kumon method of learning, which today has over 4 million students around the world, and is the focus of this article. Read more »
Link copied!
Interesting Articles
Psychology
Illich's Law and Negative Productivity

Illich’s law states that after a certain number of working hours, productivity significantly decreases. This law refers to a "negative productivity…

Psychology
The Person Behind the Diagnosis

Whoever receives a diagnosis feels that in an instant everything has changed, that their yesterday is not the same as…