Perfect Strangers is a comedy that invites us to reflect on many aspects such as privacy, hypocrisy, and smartphones. 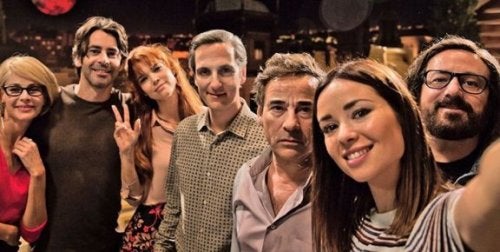 What would happen if your friends and acquaintances had access to your social media accounts all of a sudden? What do we hide in our cell phones? Perfect Strangers (2017) is a Spanish film directed by Álex de la Iglesia that explores these questions. This film is an adaptation of the Italian film Perfetti sconosciuti (2016) directed by Paolo Genovese. Both versions tell the same story. A group of friends meets up to have a nice dinner. However, all hell breaks loose when their secrets come to light due to a game.

Perfect Strangers is a film that clashes with this director’s other movies. After the premiere of The Bar (2017), as well as other films such as The Last Circus (2010), My Big Night (2015), Common Wealth (2000), and The Day of the Beast (1995), it seems strange to think that he directed a comedy meant to criticize our current society. De la Iglesia has made us become used to darker, surreal, beast-like kind of humor and normal situations that end up spinning out of control.

That’s probably why we weren’t huge fans of Perfect Strangers. Its premise is very interesting. However, that dinner had way too many appetizers and a meager main course. There were too many ingredients in that short dinner, which is something that’s obvious from the beginning. This makes some people not have any room left for dessert.

Despite this, this movie’s premise, script, and message are definitely ambitious. The characters only needed a cell phone to trigger a tragedy. It’s a modern comedy that can make you laugh and also reflect on things such as how we use technologies and if we really know our loved ones. Perfect Strangers discusses those questions through various tragicomic situations.

Social networks are part of our lives and our smartphones have become an extension of our arms. We always carry them with us. In our smartphones, we store conversations, photos, and a lot of information that we may or may not want to share with the world. What we do online should be private. However, we’re never really alone anymore. The Internet is always accompanying us and, because of that, it knows part of our deepest thoughts.

Through social media, we share what we want to show the world, such as the best photos of our trips or the delicious meal we’re about to eat. But what’s real about all of that? We live in a world where we’re constantly subjecting ourselves to external judgment. This explains why so many of us are always attentive to our image. We tend to put all our energy into showcasing a fake image and life.

In some way, we live a false reality that’s nothing but a distortion of ourselves. We sometimes don’t even believe what we’re publishing. We only do it to see what others think. Additionally, we share news we don’t even read. Perfect Strangers explores all these things. This comedy pretends to expose a group of friends, people who supposedly know each other very well.

The situations that De la Iglesia presents in this film are so ridiculous that they lose credibility. It’s not that they’re impossible, but it’s hard to believe that a group of people with so many secrets can feel tempted to expose themselves. That’s precisely what we, in our current world, want to hide from the world: our intimate and precious reality.

The characters end up taking off their masks and exposing their darkest secrets, even at the risk of losing everything they have. It’s funny due to the characters’ tragedy and misery. We laugh when we see the things that happen to them, things that may put an end to their friendship and love for each other.

In our smartphones, we keep a large part of our privacy. We take this device with us no matter where we go, which makes us vulnerable in some way. What if we left it on a table for all our loved ones to see? Even if we think there’s nothing to be afraid of, the truth is that even a small secret may be revealed. Our privacy isn’t ours anymore, we store it and leave it within the reach of those around us, no matter how many passwords protect it.

Perfect Strangers: A portrait of contemporaneity

Have we lost our privacy? Perhaps we don’t show our true selves and project an image that’s far from who we really are. In some way, privacy no longer exists. We expose so much of ourselves that we want to keep some secrets in our smartphones. Perfect Strangers perfectly portrays how people fear their own image. Nowadays, many people feel scared of showing their reality to the world.

Some characters are more reluctant than others to participate. However, there’s so much peer pressure that they end up showing their most intimate sides. Two characters in particular feel very scared, which leads to a hilarious turn of events.

Such protection of privacy leads these characters to not want to reveal that they’ve exchanged cell phones even when the situation is extremely tense. They don’t want to come clean even when they know that, if they explained the situation, things could go back to normal. Both of them decide to cling to their secrets.

The whole film is linked to a strange phenomenon that goes along this series of circumstances: the red moon or the blood moon. From ancient times, people see the moon as a conductor of the world, especially of liquid elements. The tides change with the moon, but our brain is also moist, which is why some authors like Aristotle saw a certain correlation between the lunar phases and human behavior.

We have a powerful moon that not even the best smartphones in the world can fight. The moon makes situations turn violent and participants to become irrational.

Perfect Strangers shows us the possible consequences of the world we live in. It makes us reflect on hypocrisy, lies, and smokescreens. Do we really know the people we love the most? Or do we only know the image they portray? Are we embellishing our daily lives through social media?

Álex de la Iglesia brings us a remake of a comedy film that’s different from anything else we’ve seen before. This film will definitely amuse you. You’ll have a good time while watching it and also reflect on many of the aspects it touches on.

When You’re Addicted to Social Media
The world is changing and, with the popularization of social media, new behaviors has been identified. There is talk of a new kind of "addiction." Read more »
Link copied!
Interesting Articles
Cinema, Television, and Psychology
Alabama Monroe: Love, Pain, and Ink